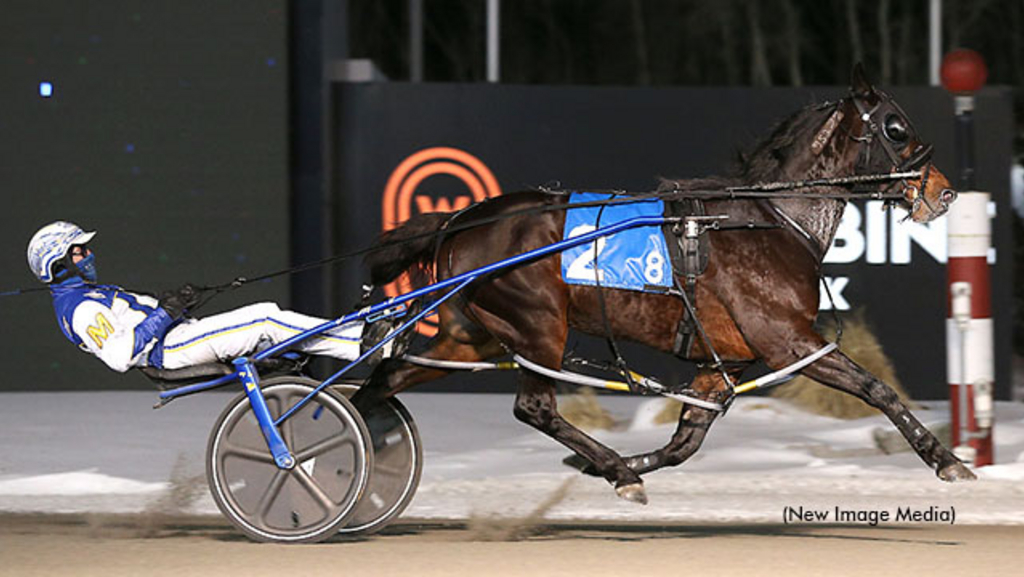 Bettorbeflyin and Linedrive Hanover stepped into the Snowshoe Series spotlight with a pair of impressive winning performances in the second leg on Friday night (Jan. 28) as temperatures dipped to -17 degrees at Woodbine Mohawk Park.

Bettorbeflyin lived up to his name as he came flying from the backfield in :27.4 to steal the spotlight in the evening's first division for trainer and co-owner Dale Fritz.

Opening round winners State Senator (James MacDonald) and VP Rockin (Doug McNair) traded turns on the lead through first-half fractions of :27.2 and :57.1 before 3-2 favourite Take A Gamble (Travis Cullen), who was making his Snowshoe debut, took his shot and held a short lead as they raced to three-quarters in 1:26.3 and turned for home. But the late-closers were coming with Bettorbeflyin rallying fastest and widest of all from the outer flow to score in 1:55.2 by 1-3/4 lengths for catch-driver Louis-Philippe Roy. State Senator re-rallied at the pylons to finish second and Texas Miki (Trevor Henry) got up for third over Take A Gamble.

A runner-up in the first leg of the series last week, Bettorbeflyin paid $7.70 to win as the 5-2 third choice.

Fritz shares ownership of the homebred four-year-old son of Bettors Delight with fellow Walkerton, Ont. partners Randy Hyatt, William Wyatt and Robin Ferrier. Bettorbeflyin is now two-for-four this year and has seven career wins from 25 starts with more than $61,000 earnings.

Series newcomer Linedrive Hanover dominated the action in the second split, winning in a career-best 1:54.3 for driver James MacDonald and trainer Tony Beaton.

After getting away fourth through a :28.4 first quarter, Linedrive Hanover took over command from early leader and eventual runner-up Merito Hanover (Sylvain Filion) approaching the midway point. He reached the half in :58.2 and clocked three-quarters in 1:27.1 before drawing off by three lengths at the end. P L Octavius (Trevor Henry) sprinted off cover to show.

Linedrive Hanover is owned by West Wins Stable, McKinlay & Fielding, J L Benson Stables Inc. and Mac Nichol. The lightly raced son of Betting Line, who made just one start as a rookie and missed his three-year-old season, is now two-for-two to kick off his four-year-old campaign.