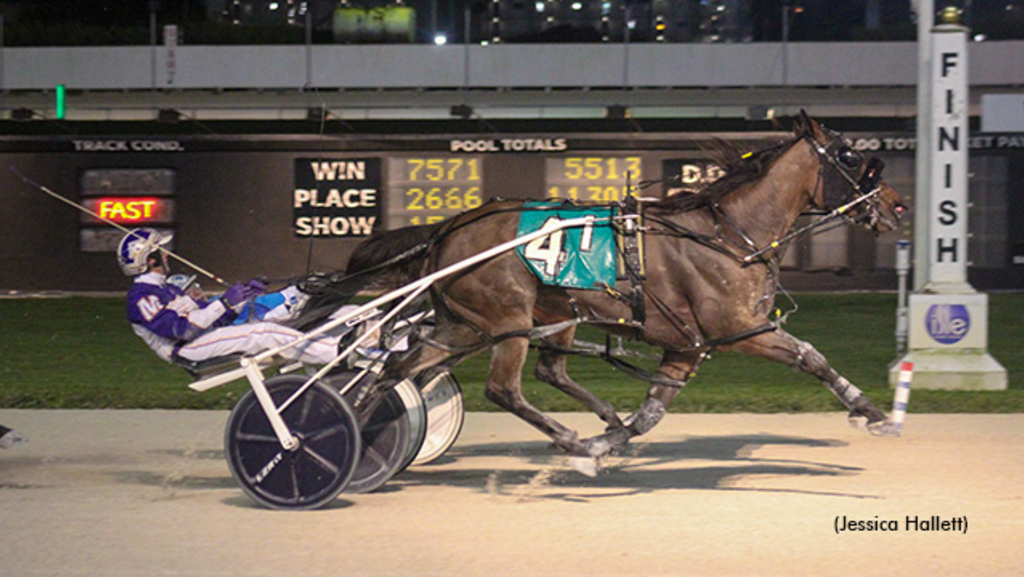 About 1/100th of a second decided the outcome of Pompano Park's featured $14,200 Open for pacing mares on Wednesday night (Jan. 26) as Crisp Mane, knocking at the door in her last three tries, finally broke into the winner's circle.

The rugged six-year-old daughter of Sportswriter, driven by David Miller, eked out the narrow photo finish decision over Image Of A Dream (Rick Plano) in 1:52.3 with LA Always Amartini (Joe Chindano Jr.) third. Sea Shadows was fourth after looming boldly turning for home with Bye Bye Felicia, closing her door on her racing career, fifth.

The race was classic start to finish with Bye Bye Felicia, LA Always Amartini and Image Of A Dream all leaving smartly and Crisp Mane letting the dust settle a bit before also moving forward in search of the top spot.

At the hot opener in :26.4, Image Of A Dream had taken the lead with LA Always Amartini yielding and Crisp Mane pressing forward and reaching the lead three-eighths in and taking the field to the half in :55.3.

On the backside, Sea Shadows, looking for her third straight win in this top class, began sprinting from the back of the pack and reached second, alongside of the leading Crisp Mane, at the third station in 1:24.1.

These two continued to duel until mid-stretch when Image Of A Dream found a seam along the pylons with these two literally stride-for-stride to the wire.

"To tell you the truth," said Miller, "I thought it was a 'heater' and the track photographer (Jessica Hallett) thought it was, as well.

"This mare has been knocking at the door her last few starts so I thought I'd try and do something a little different tonight. She always races her heart out and tonight was no exception."

Trained by Devan Miller for the Burke Racing Stable and Weaver Bruscemi, Crisp Mane won for the 18th time in her career boosting her lifetime earnings to $349,129.

Off at even-money on the toteboard, Crisp Mane paid $4.20 to win.

With Crisp Mane winning the opening event on the Wednesday card, Miller completed a "bookends" double in the last race by guiding Ourlittlemiracle to a photo finish win in the $12,600 Open II Pace for mares in 1:54, scoring by a neck over Donegalartchokin N (Dave Ingraham) with Rigginswind (Braxten Boyd) third. Dont Chip Me and Abuelita Hanover were next in that field of 10.

Ourlittlemiracle, a four-year-old daughter of Bettors Delight, used pretty much the same strategy as Crisp Mane did in the opener, taking charge at the opening marker in :27.4 and going on to post subsequent fractions of :57.1 and 1:25.4 before a :28.4 final panel was enough to hold on over a track rated sloppy after drenching rains earlier in the night.

The win was also a book-ends double for trainer Devan Miller and owners the Burke Racing Stable and Weaver Bruscemi.

Ourlittlemiracle paid $5 to win in sending her lifetime earnings to $134,215.

The $11,000 Open III for the ladies went, in a slight upset, to Come Get The Cash, driven by trainer and owner John MacDonald.

Thee seven-year-old daughter of Western Terror closed fastest of all on a very sloppy oval drenched by heavy rains to score in 1:53.1. The heavy favourite, Tuapeka Jessie N (Hennessey), was second after opening up a daylight lead at mid-stretch with Casies Believer (Chindano Jr.) third. Late Night Date A and Sunrise Hanover picked up the minor awards in the field of nine.

The lion's share of the purse vaulted Come Get The Cash's lifetime earnings over the $200,000 mark.

Come Get The Cash paid $15.40 to win as the second choice in the wagering.