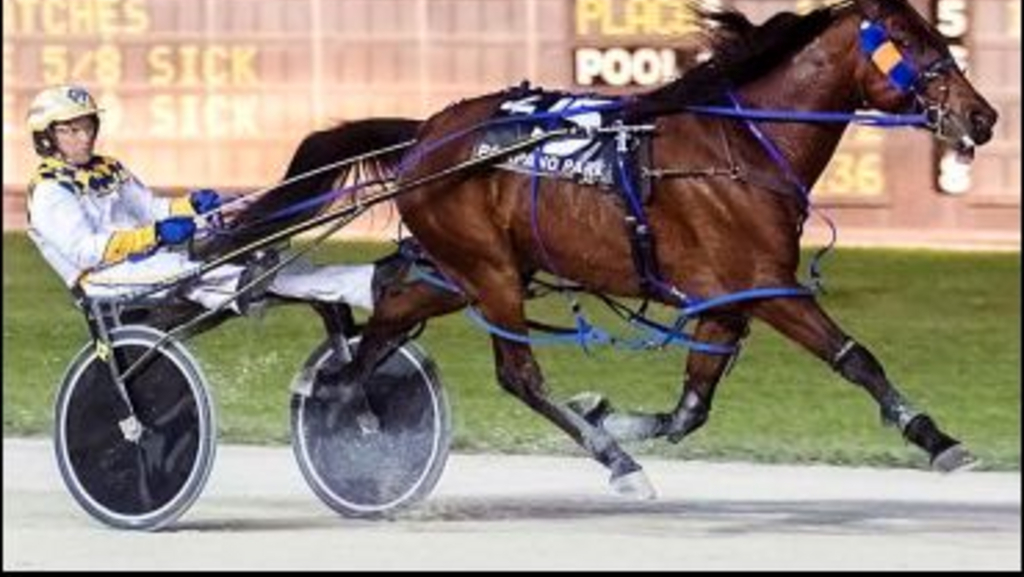 Emile Johnson Jr. was looking for a young, up-and-coming trainer to condition horses for him in New England.

Jim Mattison was looking to re-establish himself as a trainer and driver following a stint in the Army.

The two men were introduced to each other, hit it off, and have remained partners in racing ever since. And they are continuing to reap the rewards of their long-lasting friendship with top open-class pacer Panocchio.

A seven-year-old son of No Pan Intended-Panitarium, Panocchio has won 51 of 111 career races and earned $415,368 in purses. He is three-for-three this year, with all his victories having come in the open handicap division at his winter home of Pompano Park. In fact, Panocchio has won nine of 10 starts since returning to Pompano in October.

Panocchio, winning at Pompano on January 15

“That’s a once in a lifetime,” Johnson said about getting a horse like Panocchio, who was purchased by Johnson and Mattison for $23,000 at the Standardbred Horse Sale Mixed Sale following his two-year-old season with Bob McIntosh. “You can’t get spoiled, and Panocchio is the kind of horse that could spoil you, because they’re not all like him. He’s the very best that I ever had.”

That’s not to say the 79-year-old Johnson and 67-year-old Mattison haven’t enjoyed their share of success over the years. One of their earliest top horses was Mar Con Cadet, who was a standout on the New Hampshire Sire Stakes circuit in the mid-1970s and earned $105,062 in his career.

“We went on from there,” Mattison said. “We’ve had some dry spells, but we’ve had some pretty good racehorses over the years. I don’t really want to fool with the yearlings anymore. I try to buy two-year-olds coming three. That’s how we bought Panocchio.”

Johnson, a retired schoolteacher and baseball and soccer coach, lives in Athol, Mass., and has been involved in harness racing since the early 1970s. While looking for a trainer during those early years, he asked owner Paul Welcome for suggestions because he respected Welcome’s opinion.

“He said there was a young man that had just gotten out of the service and his name is Jim Mattison,” Johnson said. “He told me, ‘I think you would like him. He’s aggressive, he’s young.’ We were introduced and I recognized immediately that he knew what he was doing. He’d been brought up around horses and he certainly knew his way around the racetrack. We’ve had a great relationship from that time on. Over the years we’ve had close to 80 or 90 horses together.

“He is a true horseman and gentleman, and a friend. We’ve been very, very good friends.”

Mattison, from Bennington, Vt., got his start in harness racing at the age of 12 when his parents bought him a racehorse. He had numerous relatives in the business and was ready to return to the sport after getting out of the Army in 1971. He met Johnson and the rest is history.

“We’ve really had no arguments or disagreements over the years,” said Mattison, who spends the winters in Pompano Park and summers in Saratoga. “It’s been great.”

Johnson often visits Mattison and his wife, Vicki, once a year in Florida and then spends many of his summer weekends driving three hours from Athol to Saratoga to enjoy the races with the Mattisons.

“I look forward to it,” Johnson said, adding with a laugh, “It’s a short drive home when the horses do well.”

Panocchio helps make Johnson and Mattison feel good no matter where they are located at the time. The gelding has been particularly strong at Pompano Park, as he has won 30 of 43 lifetime races at the track and has hit the board a total of 39 times. In 2015, Panocchio paced the fastest mile in the history of the venue, as he won in 1:48.3.

“That was exciting,” Mattison said. “When we walked in the paddock after the race people came out of the stalls and were giving high fives and slapping him on the butt. It kind of brought tears to your eyes. I’ve never seen that happen.

“He likes Pompano. I think he likes the weather and the five-eighths-(mile track). He’s done well at (half-mile oval) Saratoga, he’s won a lot of races there, but the bigger track is easier on him because there is a little more time getting to the first turn.”

Panocchio didn’t show Mattison much desire to go fast when the trainer first started working with the horse at age three. But as soon as Mattison put the race bike on Panocchio and put him in a field of horses “it was like turning on a switch.” That remains the case to this day as the gelding is still not fond of training.

“It doesn’t matter where he gets away, he’s going to try. He’s a real joy.”

Johnson and Mattison have three horses at the moment. Two were purchased at last fall’s Standardbred Horse Sale Mixed Sale and are being prepped to race this season. But having Panocchio gives Johnson and Mattison something to look forward to on a regular basis. When Johnson can’t be at the track, he is glued to his computer to watch the horse.