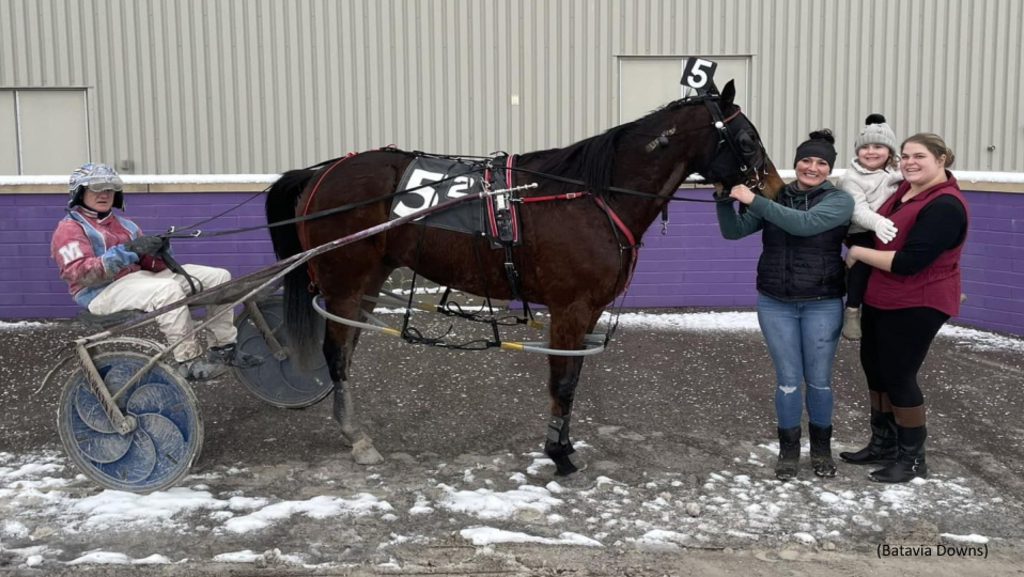 On Monday, Batavia Downs began a four week Pop-Up Racing Series for Western New York-based pacers and trotters with preliminary leg classes going for between $6,000 and $9,000 each.

The best pacing effort of the day was turned in by Sportskeeper (Jim Morrill Jr.), who went gate to wire in the $9,000 event.

Morrill left from post five with Sportskeeper and grabbed the lead before the :27.4 quarter. Then once he settled on the point, the pair dominated the field. Operating with a gapped advantage, Sportskeeper went :56.2 to the half and 1:25.1 to three-quarters with only Pet Sur Roc (Kyle Cummings) staying remotely close. When he turned for home, Sportskeeper was clear, under a line drive from Morrill and willingly paced away to a 2-1/2-length decision in 1:55.2.

It was the second straight win for Sportskeeper ($3.70) at and the purse pushed his lifetime earnings over the $600,000 mark, as he now boasts $603,847 in bank. The classy 11-year-old gelded son of Sportswriter-Keeper Flying is owned by Mike Torcello and trained by Sammy Smith.

The top trot came in the $9,000 leg where Sanchez Rocks (Kyle Cummings) made a move past the half pay off with an impressive victory.

Pilgrim Caviar (Shawn Gray) led early and tripped the timer in a quick :28.4 before heading into turn two. But at the same time, Good Boy (Ray Fisher Jr.) brushed and crushed to the front and completed the first circuit in :59.4. It was at that point that Sanchez Rocks vacated the pylons from fourth and started trotting up a storm. Sanchez Rocks drew even with Good Boy on the backside, cleared at three-quarters and then extended his lead with every stride from there. By the top of the stretch, he was long gone and trotted home under no urging at all to win by 2-3/4 lengths in 2:00.2.

Sanchez Rocks ($5.80) is owned by Marie Houghtaling and trained by Ron Houghtaling.

Morrill is now only four wins away from 8,000 career victories, a number he should hit within the next week at .

There will be two carryovers and a guaranteed pool when live racing resumes at Batavia Downs on Thursday, Jan. 26 at 3 p.m. First, there is a $4,741 carryover in the Pick-5 (which starts in race one) and Batavia Downs has announced that pool will have a $10,000 guarantee. Then later in the card there is a growing carryover of $1,322 in the Jackpot Super Hi-5 Pentafecta, which will be available in the 11th race.