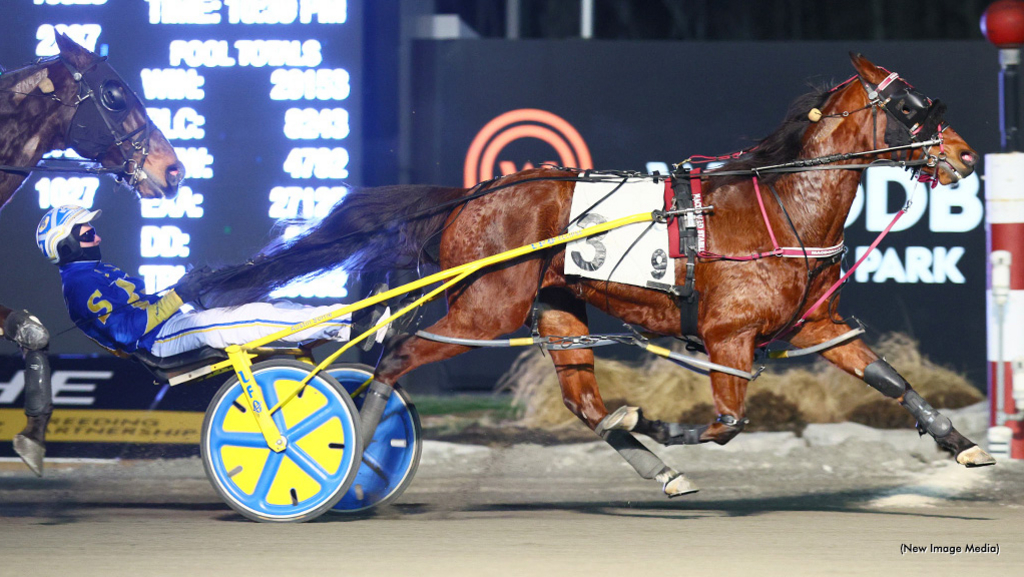 Driver Austin Sorrie cleared the lead with the five-year-old Source Of Pride gelding after a :27.3 first quarter and cruised to a :56.1 half with Wheels On Fire in the pocket. Past three-quarters in 1:23.4, Wheels On Fire took aim at Saulsbrook Victor, who then easily turned away the challenge to post a length victory in 1:50.4. Sometime Somewhere finished third and Sintra took fourth.

Brett MacDonald, who hit $10 million in driving earnings on Saturday at Flamboro Downs, co-owns Saulsbrook Victor with Brent MacLennan. THe pacer won his 13th race from 49 starts and has now banked $244,885. Ronald MacDonald trains the $4.60 winner.

Dr Joe ripped from off tumultuous speed to take the $25,000 Pop-Up Series final in 1:51.1. A battle on the lead between G A Speed Sammy and Arukidinme Cabbie clicked swift fractions of :27.1 and :54.3, which caused the backfield to tower behind the pacesetters spinning past three-quarters in 1:23. Odds-on favourite Beachin Lindy lunged by rivals to take the lead while Dr Joe arose widest and stormed after the late leader in the final eighth. Dr Joe had the momentum and landed a head in front of Beachin Lindy at the beam in a 1:51.1 mile with I Ama Rocket finishing third and St Lads Cash taking fourth.

Trainer Richard Moreau scored a hat trick on the 12-race card. He opened the evening with a victory by Ahoy (1:52.1 winning mile, $4.30 to win) and swept the early double with a win by Shadow In Red (1:52.2, $7.30). He completed the hat trick while also sweeping the top-two spots in Race 4 with a win by American History (1:50.4, $9.40). American History's driver, Doug McNair, finished his night by surpassing the $75 million mark in career earnings.