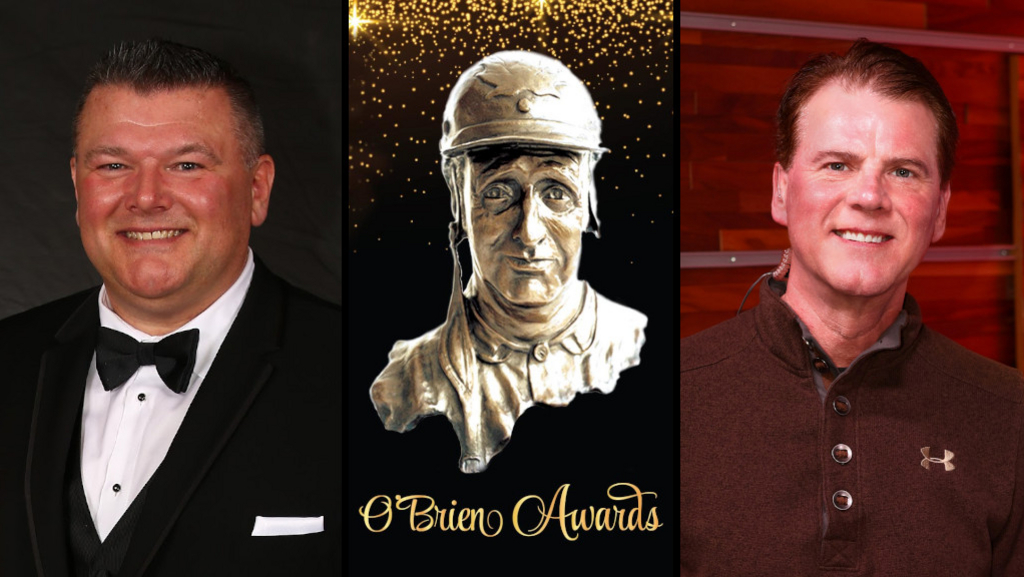 Standardbred Canada (SC) is pleased to announce that Ken Middleton and Randy Waples will co-host the 2022 O’Brien Awards Gala on Saturday, Feb. 4 at the Hilton Mississauga / Meadowvale Hotel in Mississauga, Ont.

Ken Middleton co-hosted the O’Brien Awards for 18 consecutive years through the 2020 virtual awards and will be back at the podium in a live setting for the 2022 awards. Middleton is involved in harness racing as part of the broadcast team at Woodbine Mohawk Park as track announcer and runs his own stable as a breeder, owner and trainer.

Hall of Fame driver Randy Waples will make his first appearance as co-host of the O'Brien Awards but is no stranger to this prestigious event. Waples is a three-time O'Brien Award winner himself, voted Canada's Driver of the Year in 1998, 2001 and 2010. He recently began his new position as a full-time, on-air Racing Analyst with Woodbine Entertainment.

SC checked in with Middleton and Waples to talk about the return to a live awards ceremony, the 2022 racing season and more.

How much are you looking forward to a return to the live event setting after two years of virtual galas?

Ken – I'll be as excited as anyone that the event is finally able to return to a 'live' format once again. The pandemic robbed all of us of that experience for the last couple of years. The virtual event paled in comparison to the whole experience of the 'live' event.

Randy –  [Being asked to co-host], it’s just kind of like a fun thing, you know. It’s something I have never done before. I’m just really looking forward to it. I love working with Kenny anyway.

What was your favourite moment from the 2022 harness racing season?

Randy – Bulldog Hanover’s 2022 season was my big thrill for the year. I couldn’t pick out one race of Bulldog's, there’s just so many huge memories of that horse. Just any race that he raced really got me excited. I knew what he was doing for horse racing the same way that Somebeachsomewhere did, the same San Pail did. Certain horses come along and it just seems like they ignite the masses.

Who are the three finalists that you’d consider your "Best Bets of the Night" to win an O’Brien Award in 2022?

Which of the categories do you think will be the closest in voting?

Randy – There are a lot of tough calls, but I think Three-Year-Old Trotting Fillies, Adare Castle and Warrawee Xenia, is going to be a tough one.

Which finalist do you think will have the biggest cheering section at this year’s event?

Ken – I think the biggest cheering section will be in the corner of Bulldog Hanover. Horses that generally do the unthinkable are appreciated by everyone. His ability to capture the attention of the racing world every time he did something on the track should translate into a unique response from the crowd that night.

Randy – If he wins, I say Shawn Steacy. Whatever one he wins, I think there will be a lot of people that are very, very happy for him and I think a lot of his family and grooms and everyone else will be there, so I think he will have a pretty loud one.

If you were to create a new O’Brien Award, what would that award be?

Randy – Something to do with giving back. Whether it is a driver or trainer, somebody that gave something and really went out of their way for charity. Like a humanitarian award.

Ken – The Cincinnati Bengals are my pick to win it all. They really stumbled out of the gate due to offensive line issues, but they managed to right the ship with mid- and late-season adjustments. And they’ve managed to stay relatively injury free. They have more than enough weapons on both sides of the ball to go the distance.

How much are you looking forward to working with Ken / Randy this year?

Ken – I think it’s going to be a blast. He’s an incredibly colourful guy and his passion for the sport is off the charts. Plus you never know what you’re going to get when it comes to Randy Waples. Expect the unexpected!

Randy – The biggest thing is the individual that he is, for me. He’s just a very personable guy. I would say it’s a 50-50 split, really. Part of it is because I like being around Kenny and the other part is that I really respect the way that he does things and it would be nice to be able to pick a few things up off of him.

Ken – I’ve always wanted to travel to Italy. The food, the culture and the spicy salsiccia – Mamma mia!

Randy – I've always heard that Austria is beautiful and I think that there would be a lot of history there. I think I'd go there in the summertime. And I'd like to see Montana, too. I just like to see the scenery and the history of the places.

The O’Brien Awards Black Tie Gala is Canadian harness racing’s most prestigious event and SC is pleased to announce that the 34th edition of the O'Brien Awards will be a ‘live’ event at the Hilton Mississauga / Meadowvale Hotel on Saturday, Feb. 4, 2023. Ticket sales have closed but details on a live O'Brien Awards night online video stream will be announced soon.