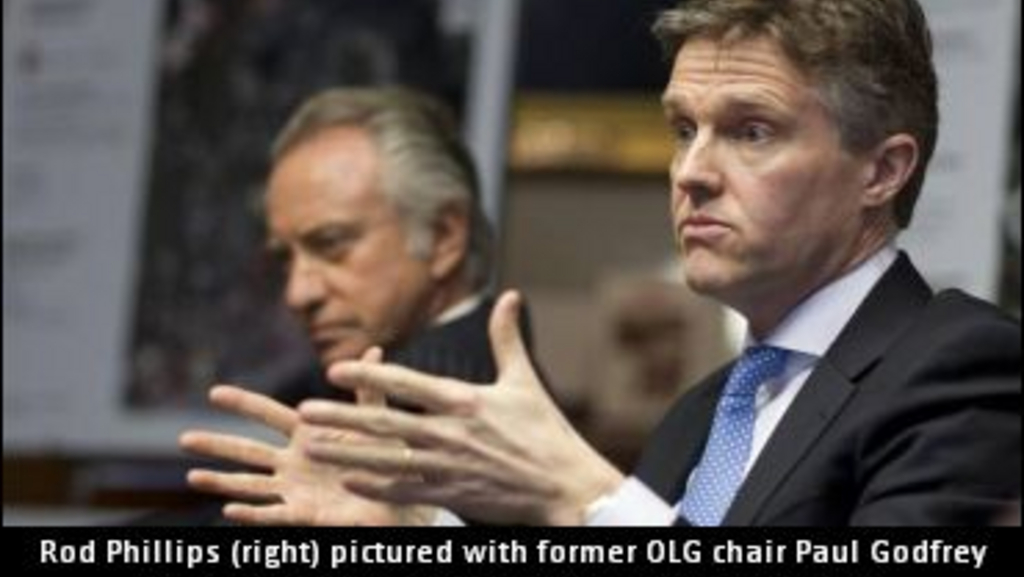 On Wednesday, January 22, Philip Olsson, chair of the Ontario Lottery and Gaming Corporation Board, announced that the OLG Board of Directors has received and accepted a letter of resignation from president and CEO Rod Phillips so that he can take on a new role in the private sector.

Olsson thanked Phillips, who has been in the role since 2011, for his service and leadership. “Rod Phillips has led OLG to its highest Net Profit to the Province since 2005,” said Olsson. “He has captained the design and launch of the modernization of Ontario’s lottery and gaming industry. Under his watch OLG has achieved its highest level of public confidence. We wish him well in his new position.”

Olsson underlined that the modernization of OLG is now well underway. “The board is fully supportive and OLG is in active procurement across the province. We are looking forward to the next phase of modernization as we begin to choose service providers later this year. As part of modernization, OLG is continuing to work with the Ontario government and the horse racing sector to integrate horse racing into the provincial gaming strategy.”

Upon receiving Phillips’ resignation, the board of directors appointed long-serving OLG executive Tom Marinelli (executive vice president, chief transformation officer and chief information officer) to the position of acting president and CEO while the board launches a search.

Olsson stated, “The leadership team at OLG is an enormously capable group who will continue to lead the core business as well as modernization. Mr. Marinelli has been acting CEO on a previous occasion and he has the full confidence of the board of directors. Mr. Marinelli will do a great job as he guides the organization through the next phase of modernization.”

Phillips said in a statement that he is leaving OLG for a position in the private sector that will be announced by the new organization in February. “It’s been a tremendous privilege to serve the public alongside OLG employees,” said Phillips. “Under the leadership of Philip Olsson, chair of the board and Tom Marinelli, acting president and CEO, I am confident that OLG is well-positioned to modernize the industry and to achieve great success in the years to come.”

(With files from the OLG)

Does anybody else find it

Does anybody else find it strange that Hudak or Horwath have not commented publicly regarding the OLG president Rod Phillips quitting?
This action continues to show that the privatization plan is a total farce and needs to be stopped now. This plan was always about building a mega Toronto casino that isn't going to happen anymore.

We can bring harness racing back to rural Ontario, but to do that we need to stop this privatization plan from going any further before they fire sale the casinos and racetrack slots.

Put pressure on Hudak and Horwath to demand answers about Phillips abandoning Ontario and the OLG.
Time to abandon the privatization of the OLG.

I guess we can say good

I guess we can say good riddance to bad rubbish but, as is the case with the others who have moved on to greener pastures, the damage has been done and the industry is left hanging by a thread. Wynne has some serious reconstruction to do if she is sincere in saying that she wants to see a thriving racing industry in Ontario. With an election looming in the near future, we horse people have to pressure all parties to put a concrete plan in place to rebuild what these clowns have so thoughtlessly destroyed. Wynne says she has a plan that will come into effect in April/14. Until we know the details of that plan, it is hard for so many of us and for new investors to have the confidence to breed, buy or maintain stock for a questionable future.

I would like to throw my humble name into any discussion into replacing the illustrious Mr. Phillips. I have owned horses, helped train them, spent MY MONEY in these ventures, and like any others involved in harness racing have suffered through all of the BS of the last few years. AND I will do it far less than he made...................... BUT..... Could I still get that platinum-plated pension???? I AM SERIOUS HERE.......

Another rat leaving the nest.

Another rat leaving the nest. First, Duncan, Godfrey and McGuinty and now Phillips. I wonder if it is getting too hot in the kitchen considering that the Auditor General is snooping into the affairs of the OLG.

Can anyone say Golden

Can anyone say Golden Parachute. A just reward for all the hard work he's done to be sure well according to anyone in the Liberal government.

Things that make you go

Things that make you go hmmmmm .... It just happens that the report by the auditor general is to be realesed very shortly with regards to the olg and there destruction of the sarp program and there so called modernization ... Seems like none of these captains want to sink with there ship cant say as i blame them .. Hes probably off to join the rest of the gang in one of those quote private sector jobs, for someone we all know .. has anyone heard from dwight duncan???

UH-OH Here it comes. What

UH-OH Here it comes. What Casino or Casino Lobby Group is Mr. Phillips going to officially join in February? Unofficially he has helped the Liberals destroy horse racing (in particular harness racing)to pave the way for a casino. If he does take a job in that industry I hope we see an investigation. These guys aren't even trying to hide it anymore. This tears at the moral fibre of society... there are no repercussions, so why play fair? I know I play fair and it doesnt work out so well financially. I would wish him well but it's not heartfelt. Thanks for nothing Rod.