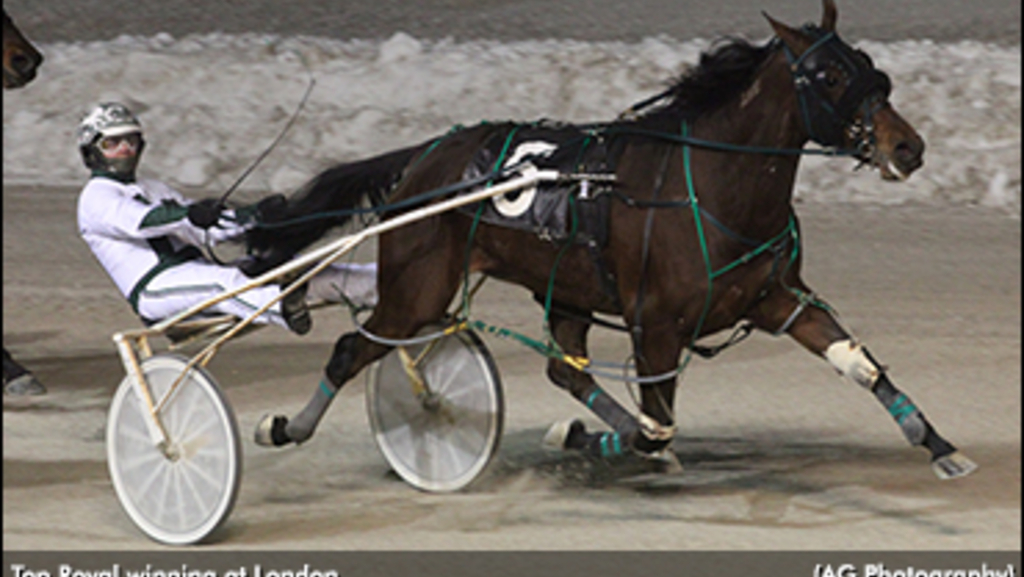 Rolling first over, Top Royal slid to a 1:56.3 victory in the $10,500 Fillies and Mares Preferred 2 Handicap Pace at The Raceway at Western Fair District on Tuesday (Jan. 21).

The Joy Luck Club led the field past the quarter in :28.1 while Top Royal raced from sixth. Driver J Harris soon tipped the seven-year-old Royal Mattjesty mare first over and ranged towards the leader through a :58.2 half and stuck a head in front nearing three-quarters in 1:26.4. The Joy Luck Club retook control briefly around the final turn but faltered in the stretch as Top Royal extended to a length-and-a-half lead at the finish. Tilikum followed cover to finish second while The Joy Luck Club settled for third.

Casino Classic cleared command early and wired her competition in the $8,500 Fillies and Mares Preferred 3 Pace.

Driver Scott Young secured the front before a :28.2 first quarter while Cayo Loco mounted a first over bid moving to a :59 half. Cayo Loco then stalled up the backside and faltered past three-quarters in 1:28, leaving Casino Classic on a loose lead into the stretch. The six-year-old Classic Card Shark mare cruised to a one-and-a-half length victory in 1:58.1 over pocket-sitter Alphabet Queen with New Billionaire taking third.