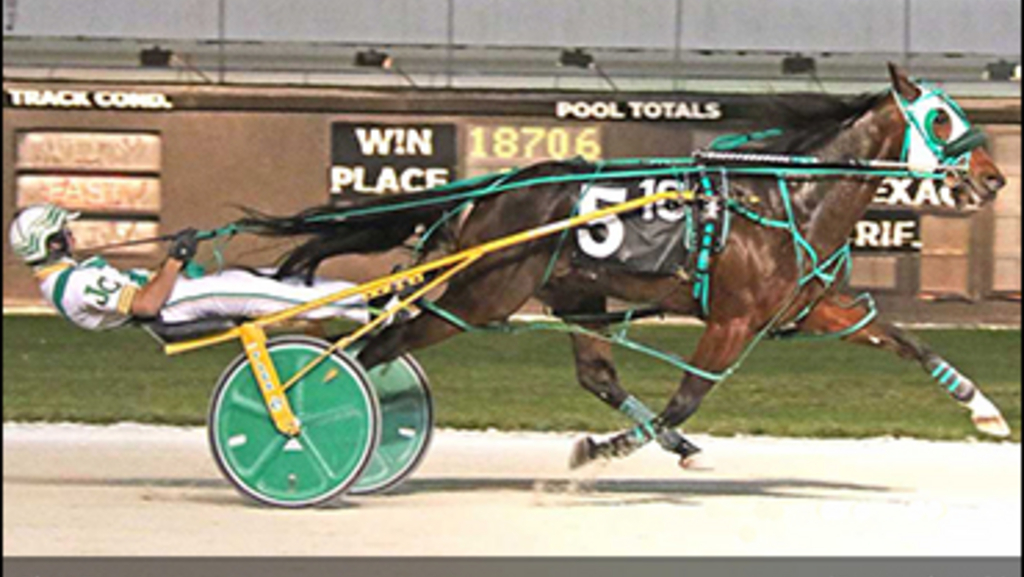 Skip To My Lou and Born To Thrive shared the limelight at Pompano Park on Monday (Jan. 18) at Pompano Park, taking top honours in their respective $11,500 Open Handicap events.

Skip To My Lou, confidently handled by owner-trainer Joe Chindano Jr., conquered seven worthy rivals by grinding away first-up from turn two all the way home to hit the wire in 1:50.4 — a new lifetime mark. His winning margin was 1-3/4 lengths over Kinnder Jackson (Mike Simons), who closed fastest of all to finish second. Real Peace (David Miller), who sawed through panels of :26.2, :55.2 and 1:23.2, finished third while Southwind Amazon hit the wire fourth and Bell I No picked up the nickel in the classy octet.

The five-year-old gelded son of Sweet Lou, who finished third in last week's Open, pacing his last three-quarters in 1:22.3 from post seven, started grinding away heading to the half, reached the leader's saddle pad around the final bend and settled the issue midway the lane by drawing clear.

In a post-race interview, the 21-year-old driver lamented, "when I pulled, I was looking for cover and a second-over trip — you know, these were a bunch of really good horses — but nothing developed. He really felt good, so I just let him roll. He can go a long way on the outside, that's for sure."

As the second choice in the betting, Skip To My Lou paid $7.20 to win.

In the companion trot, Born To Thrive, driven by Rick Plano, churned his way to a 1:54.3 victory for owners John Campagnuolo and Maryann Plano.

The eight-year-old altered son of Swan For All never saw the inside part of the racetrack during his journey, but still managed to eke by a stubborn The Lionking AS (Kevin Wallis) to score by a neck for his 40th career win. The 13-year-old war horse Cantab Lindy (John MacDonald) was another neck back in third. Bucketlist Hanover was fourth, just a length off the winner, while Everyones Talkin was next in the septet.

Plano's charge, starting from post four, was, as usual, sluggish leaving and sixth early as The Lionking AS engaged early with Cantab Lindy to take charge at the :27.2 opener. But Born To Thrive started grinding away, reaching third after a half in :56.2 and along side the leader just past the third station in 1:25.1.

These three — Born To Thrive, The Lionking AS and Cantab Lindy — tussled all the way home with Born To Thrive earning the nod at the wire.

After the race, Plano said, "Born To Thrive just doesn't have much gate speed, but he sure can take a lot of air. He just keeps grinding and grinding away, That's his style."

Racing continues on Tuesday (Jan. 19) with a mandatory payout on the track's popular Super Hi-5 finale that has a carryover of well over $120,000 and a pool expected to be several hundred thousand dollars.

The track will also offer a Pick-4 with a guaranteed pool of $20,000. That offering features a 12 per cent takeout, the lowest in the industry.

Free programs are available on the Pompano Park website.