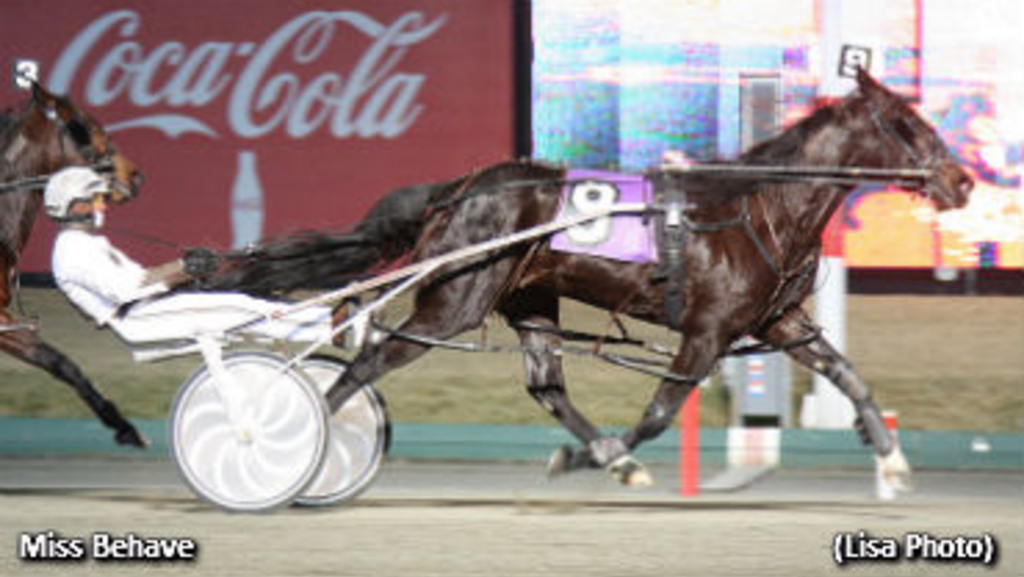 Round two of series action dominated the Thursday evening program at The Meadowlands, as trotters clashed in five divisions of the Super Bowl and female pacers sparred in a set of splits in the White Ruffles

Psyched got things started with a 1:58.2 score in his $12,500 Super Bowl assignment for the tandem of driver Dan Dube and trainer Lisa Zabielski. Dube hustled the four-year-old son of Conway Hall-Psychotherapist through fractions of :29.1, :59.1 and 1:29 before using a :29.2 closing panel to win by 1-1/2 lengths. Conway Cruiser was next best, with Enchanted rounding out the top three finishers.

It was the first win of the season and the fifth lifetime tally for Psyched, who has stashed away $23,368 to date for owner Kevin Patrick Quinn of Smithtown, NY.

Buzz Bomb pulled off a 12-1 upset in the second division, winning in a time of 1:57 for trainer/driver Jim Meittinis. The gelding was parked every step of the mile through fractions of :29.1, :57.3 and 1:26.3, but when the leaders tired he kicked home in :29.3 to pick up the pieces and his first lifetime win in 1:57. Stir Me Up was second, with Carsons Victory setting the tempo before fading late to grab third prize.

The four-year-old son of Windsongs Legacy-Ms Matched Pearls has banked $10,223 to date for British Betty Racing Stable of Farmingdale, NY.

Aladin AS never had to leave the pylons to come away a winner in the third division for driver Ron Pierce. The four-year-old son of Chocolatier-Self Involved tracked Bees Knees through intervals of :28.4, :57.2 and 1:26.1 before passing that drifting rival in the closing strides en route to the 1:57.3 tally. Bees Knees was second, with Hardrockenjessica taking home third-place money.

Peter Tritton trains the gelding for New York, NY partners Michael Lipman and David Postman. The victory was the first of the year and the second lifetime triumph for the career winner of $38,550.

Dontevenknowmymame became the first favourite to win in the second round of the Super Bowl Series thanks to her four-length romp in 1:55.4. Driven by Eric Abbatiello, the four-year-old daughter of Master Lavec-Hello Mamie made a three-wide move at the three-quarter pole before turning on the jets and drawing away to the impressive score. Big Sky Hurricane was next best after setting the early speed, and Lady Love Hanover rounded out the top three finishers.

Owen Eiler, Jr. of Philadelphia, PA owns and trains the 12-time winner, who now boasts earnings of close to $80,000.

My Man was sent off as the 7-5 favourite in the fifth division of the Super Bowl Series, and he didn’t disappoint his army of pari-mutuel backers. Yannick Gingras put the square-gaiter on the lead right from the outset and after carving out panels of :28.4, :57.4 and 1:26.4 he slipped home in :29.2 to win by five lengths over All Munky Business in 1:56.1. Commandment tagged along to finish third.

It was the third lifetime victory for the four-year-old son of Malabar Man-In To Me, who is trained by Edwin Gannon, Jr. Gingras of Allentown, NJ shares ownership on the career winner of $13,989 with Dawn Gannon of Dover, DE and Domenic Costanzo of Westbury, NY.

Miss Behave, who was a 1:57.3 winner in the opening leg of the White Ruffles Series, came on strong to win Thursday’s second-leg assignment in a time of 1:53.4 for driver Brian Sears. Sent off as the 4-5 choice in the $12,500 tilt, the four-year-old daughter of Dags-Miss Megan E tracked cover before springing into action and using a :28.4 final quarter to gain the win by 1-1/4 lengths over Devine Filly. Look Annie Hall grabbed the show dough in the eight-horse affair.

Donald Maiorano trains the 11-time winner for the Cappy Stable of Bronxville, NY. The productive performer has stashed away $46,209 in lifetime earnings.

Cruzin Angel had no problem getting the job done in the second division for driver Andy Miller, who guided the four-year-old daughter of Yankee Cruiser-Ruffians Angel to a 1:53.2 decision. A badly beaten seventh in the opening leg of the series, Cruzin Angel laid just off the speed in the opening quarter of Thursday’s assignment before brushing to the top. She cut middle panels of :56.2 and 1:25 en route to the score by two lengths over Crazyboutdadrummer. Gray Olives took home the third-place money.

Daniel De Vitis conditions the mare for owners George Green of Clarksburg, NJ and Rhonda Heady of Peoria, AZ. The six-time winner, who went 4-for-13 last season, has now potted more than $42,000 in lifetime earnings.