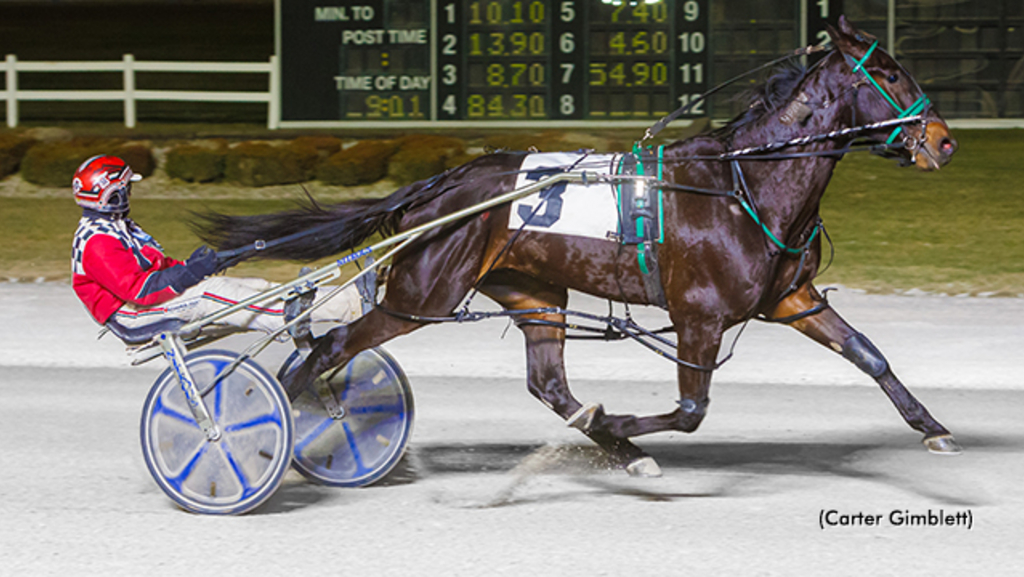 The six-year-old Sunshine Beach gelding Privilege put forth a powerful performance in the opening round of another Pop-Up Series at Flamboro Downs, romping in a 1:55.3 mile when winning the second of three opening-round divisions on Sunday (Jan. 16).

Driver Paul MacKenzie motored Privilege from post 3 to the point and opened three lengths on Mossies Art racing second by a :28 first quarter. Privilege drew farther clear of the field passing a :57 half and gained more separation when accelerating to three-quarters in 1:25.3. Having six lengths on his closest pursuer around the final turn, the Clayton Miller trainee coasted to the line 6-1/4 lengths better than 7-5 favourite Mr Mach Jimmy closing from last for second. Mossies Art finished third and Don’t Write Me Out tired from a first over trip to take fourth.

Exit Smiling pulled an 8-1 upset in winning the first division of the Pop-Up Series, posting a mile in 1:57.2.

Jack Of Clubs cleared the lead to the first turn while Freds Night fired from the outermost post but failed to get to the cones. Uncovered, Freds Night dug into the pacesetter through a first quarter in :27.3 and a half in :57 before making a hasty retreat into the backside. Odds-on choice No Bettor Joy then took his shot at the leader out of third while driver J. R. Plante followed that one’s move with Exit Smiling and sat poised by three-quarters in 1:26.4. Plante kicked the seven-year-old Vertical Horizon gelding off cover around the final turn and downed the favourite through the lane to win by 1-1/4 lengths. Little Manny rode the pylons for third and Real Wicked took fourth.

Day Delight darted from the pocket to land the lead and narrowly hold off a late charge from 2-5 choice UF Bettors Hanover to win the third division of the Pop-Up Series in 1:57.2.

G A Speed Joey demonstrated his agility off the car when dashing 4-1/2 lengths ahead of pocket-sitter Day Delight to the quarter in :27.1 before settling. Past the half in :57.1, the pacesetter still held a marginal lead, but a slow third quarter helped attract Day Delight into the mix. The pair hooked up past three-quarters in 1:26.2 and Day Delight soon after overtook G A Speed Joey coming into the stretch. Meanwhile, UF Bettors Hanover tracked Day Delight’s cover and launched a late bid for the lead coming to the finish, but the Vic Puddy trainee held firm to keep a head in front at the beam. American Sniper rallied from last for third and G A Speed Joey settled for fourth.