Series Mania Served Up In Jersey 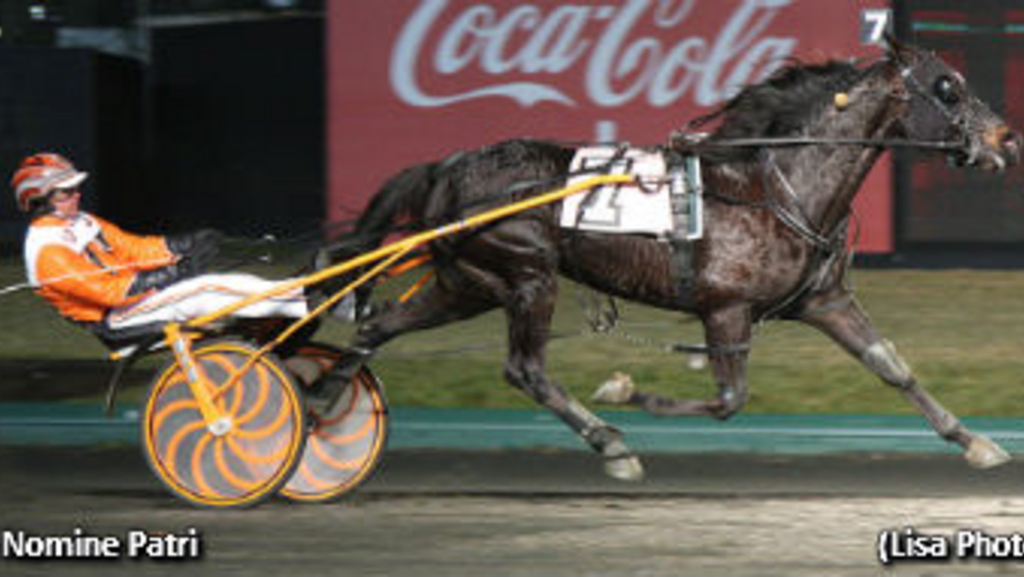 In Nomine Patri took the opening division of the Super Bowl Series in a time of 1:58.2 for driver Andy Miller. The four-year-old son of Credit Winner-Blue Skies Hanover enjoyed a pocket trip behind Cathys Princess before roaring past the foe in the lane en route to the four-length score. Super Manning was second best and Psyched finished third in the $12,500 affair.

Joe Hanney trains the four-time winner for owner Liisa Vatanen of Cream Ridge, NJ. The gelding pushed his lifetime earnings to $31,136 with the win.

David Miller mapped out the winning trip in the next tilt with Glide To Victory, who stormed home to win by 3-1/2 lengths in a career-best clocking of 1:58. The four-year-old son of Yankee Glide-Miss Fairfax sat just off the pace in early stages of the mile before making a bold brush to the lead at the three-quarter pole before drawing clear for the win. Bruise Cruise, who was sent off at 91-1, was second with Mr Jim Dandy taking home third prize.

Gary Cameron trains the four-time winner for the Windswept Stable of Oakton, VA. The homebred has stashed away $31,470 to date.

DWs Easter came up with an 11-1 upset in the third division for the tandem of driver Jim Marohn and trainer Debra Miller. The four-year-old son of Dilbert Hanover-Coco Lou survived a first-over journey en route to posting the two-length triumph over Buzz Bomb in a personal best of 1:59. Absolutely Certain was third best in the ten-horse tilt.

The gelding, who went 5-for-11 last season, is now a six-time winner for owner Donald Lapage of North Bangor, NY. The high percentage performer bumped his earnings to $22,513 with the victory.

The Longshot parade continued in the next affair thanks to the 22-1 shocker turned in by All Munky Business and driver Yannick Gingras. The four-year-old daughter of Dream Vacation-Eagle Lane, who was 0-for-17 going into the tilt, rallied into a slowing tempo and came away with the half-length score over 58-1 runner-up Carsons Victory in 2:00.3. Pass The Popcorn was a lapped-on third in what turned out to be a blanket finish.

Jean Drolet trains camera-shy lass for the Funky Munky Stable LLC of New York, NY. The graduate of the NYSS program lifted her lifetime earnings to $39,793 with the triumph.

Hardrock Kid hauled home a new lifetime mark of 1:58.2 in addition to the lion’s share of the purse thanks to his narrow score for driver Tim Tetrick. The four-year-old son of Cincinnati Kid-Allie Jane rallied from just off the pace to win by a head over race favourite Dontevenknowmyname. My Man was a solid third.

It was the 2012 debut for the gelding, who went 7-for-22 last season for owner Beverly Lentz of Independence, MO. The payday pushed his overall earnings past the $100,000 mark.

In the first division of the White Ruffles for four-year-old mares, Miss Behave closed from next-to-last and won by a neck in her $12,500 assignment for the team of driver Brian Sears and trainer Donald Maiorano. The mare, who tracked cover before making a three-wide move at the three-quarter pole, used a :28.2 final frame to post the neck decision over Fellas Ella in 1:57.3. The show dough was earned by Angelos Dream.

Devine Filly erupted for a 15-1 upset last week, but she was sent off as the 6-5 favourite – and delivered on that pari-mutuel promise – in the second division of the White Ruffles Series. The daughter of Metropolitan-Fabulous Filly shadowed cover from second over before springing into action in the late stages of the contest. Her :30-second closing panel was enough to earn her the length decision over Rei Of Sunshine in 1:56.3. Lizas Pride rounded out the top three finishers.

Yannick Gingras guided the John McDermott trainee to the winning effort. The four-time winner, who races for owner/breeder Robert Devine of Freehold, NJ, upped her lifetime earnings to $17,696 with the win.