Held out of racing at two so he could mature, Whiskey Blu has launched his sophomore campaign with a flourish, winning all seven of his starts by a combined 24-3/4 lengths and banking more than $36,000. Just how good is this Southwind Frank-Kendall Blue gelding? Even his connections aren’t sure. 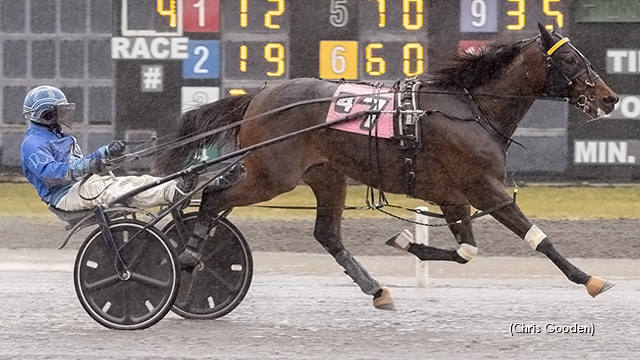 Some answers may become clearer Wednesday at The Meadows when Whiskey Blu tries to stretch his career unbeaten streak to eight in the $12,500 opening leg of the Terry Altmeyer Memorial Trot for three-year-old colts and geldings. This may be his sternest test yet as he’ll lock horns with Jujubee, a son of Creatine-La Cantera who has four victories in seven lifetime outings, boasts a mark of 1:56.3 and never has finished off the board.

His current owners purchased Whiskey Blu privately last year for $35,000, attracted in part by his pedigree. The Burke team campaigned the youngster’s dad and, even though Southwind Frank since has been syndicated, Burke’s groups still own the biggest chunk of him. So far, so good. There was only one problem.

“We brought him north, and he wouldn’t trot,” Weaver recalls. “Ronnie did a great job taking his time with him. Usually, we don't bring three-year-olds back until April, but this guy got it sorted out. He seems to be doing it easy.”

Indeed, he’s comfortable wherever Charlino puts him, turns on the trot whenever he’s asked and reaches for more when a challenger dares confront him. But he’s yet to face top competition and may not get many opportunities, at least this year. He’s eligible for Pennsylvania Sires Stakes, which typically attract some of the sport’s best, but few of the marquee Grand Circuit events.

He’s paid into the Bluegrass, the Liberty Bell and the Keystone Classics. So if Whiskey Blu is to make his mark in his division, he’ll need to sparkle in his handful of chances — and deal with the pressure of being undefeated.

“There is a little bit of that,” Weaver says. “How often do you have a horse that’s never lost? It kind of plays mind games with you.

“I hope he continues to race well — particularly for purses with maybe an extra zero or two on the end of them. There’s no reason to think he won’t be a really top trotter, but it takes a little imagination. He needs to drop about five seconds to get to that level.”

Wednesday’s co-feature is the $12,500 opening leg of the Ruby Cook Memorial Pace for three-year-old fillies. It goes as the sixth race with Filly Speaks (Post 5, Hall) the 8-5 morning line favourite off two straight victories.