Fresh off a win in the $530,000 Breeders Crown Final for three-year-old pacing colts and geldings, Dorsodoro Hanover look to add to his bankroll when he visits Indiana for the first time this season in the $190,000 Monument Circle Pace for trainer Ron Burke. The Somebeachsomewhere-Deer Valley Miss colt, whose seasonal earnings just surpassed the $1 million mark, has won 10 of 18 seasonal outings and currently leads the division in purse earnings for the season. Dorsoduro Hanover will play the role of morning line favourite at 9-5 from post eight with Matt Kakaley in the bike.

Also making an appearance on the evening for the Burke barn is Foiled Again, the richest Standardbred of all-time, who will be racing in the $15,000 Dick Macomber Memorial Pace as part of a stop on his farewell tour. A career winner of more than $7.6 million, Foiled Again is currently in his final season of racing before retirement. Foiled Again has made 21 starts this year at 14 different tracks, including several county fairs, and he’s not done yet.

In September, 2018, at the age of 14, and with only four months to go before his mandated retirement, his owners, Burke Racing Stable, Weaver Bruscemi, and JJK Stables, began the farewell tour to showcase the legendary pacer to racing fans across North America.

As a three-time Horse of the Year, Foiled Again only got better with age. At age eight, he became the oldest pacer on record to have a million-dollar year. By age nine, he had three consecutive million dollar-winning seasons and also won his first Breeders Crown title -- the Open Pace at Pocono Downs -- against a field of younger horses, and became the oldest horse to win a Breeders Crown. In addition to his race records, he also was named Pacer of the Year in 2011, Older Pacer of the Year three times, and Canada's Aged Pacer of the Year twice. He's won major stakes races at tracks around the US and Canada including three editions of the Hoosier Park Pacing Derby. 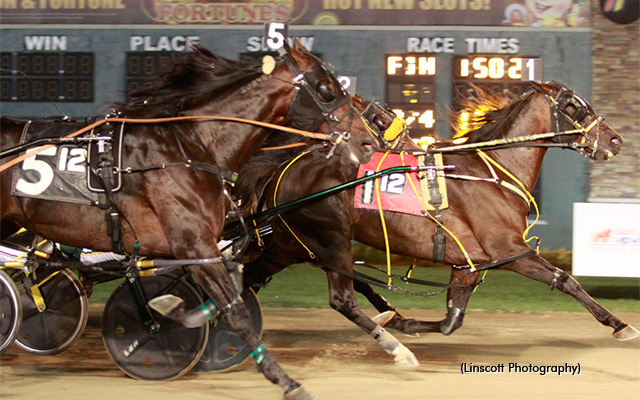 Harrah’s Hoosier Park invites racing fans to join in saluting a true champion as Foiled Again will be available for a meet and greet in the front paddock after his race. Starting at 5:00 p.m., guests will also have the opportunity to enter to win a ride in the sulky with Foiled Again to lead the post parade for the first race.

In conjunction with the racing activities, racing fans will have the opportunity to win a 55-inch smart TV by swiping at any promotional kiosk from 10:00 a.m. to 9:00 p.m. One lucky winner will be announced at 9:15 p.m.

For more information on the upcoming live racing and entertainment at Hoosier Park, please visit hoosierpark.com. The live harness racing schedule at Hoosier Park will follow a Tuesday through Saturday schedule and be conducted through November 12.

(with files from Hoosier)