Grand Slam For Power And Grace

Life is good right now for trotter Power And Grace who rolled to an impressive victory — her fourth consecutive triumph, in fact — in Thursday’s $11,500 Preferred 2 for trotters at Flamboro Downs.

Sent off as the 1-5 favourite, the six-year-old daughter of Holiday Road-Mark Of Honour marched to the lead from Post 2 for driver Brett MacDonald and together they led the field through fractions of :29.1, :58.4 and 1:27.3. A :28.4 final quarter was enough to earn the mare the win by three-quarters of a length over Arrakis in 1:56.2. The Fixer took home third prize in the five-horse affair.

Power And Grace, who hails from the stable of trainer Ron MacDonald, has assembled a 6-7-3 record from 22 trips to the track this season for Hartel Maintenance Inc and Lormer McClure. The 30-time winner has banked over $245,000 to date.

It was Flamboro Downs’ turn to host a race in honour of the Ontario Standardbred Adoption Society’s 25th anniversary tonight and the $6,000 contest was easily captured by Keepitinperspctive.

The pretty grey filly Patina Seelster was the early pacesetter for Paul MacKenzie but they were covered up by Keepitinperspctive at the :28.2 opener and they never looked back and hit the wire in 1:57. Lili GL was second followed by Larjon Lena. Robert Shepherd piloted the winner.

It was the third victory of the year for the four-year-old Bettors Delight daughter owned by Stacey Newman and the JJJ Stables. Paul Megens trains.

Every racetrack in Ontario is celebrating OSAS’s anniversary with a special race this year. Tonight was the ninth with Western Fair (October 8), Mohawk (October 23) and Rideau Carleton (October 28) still to come. 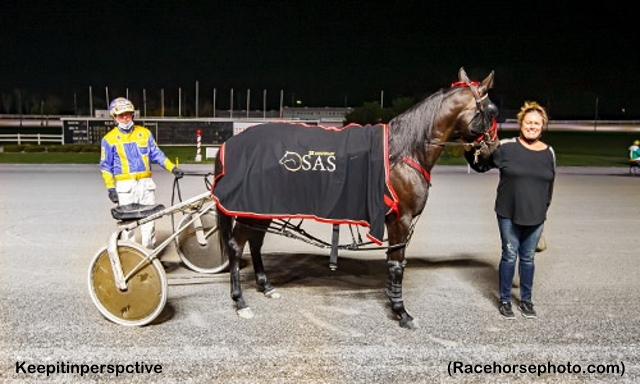 (With files from OSAS)