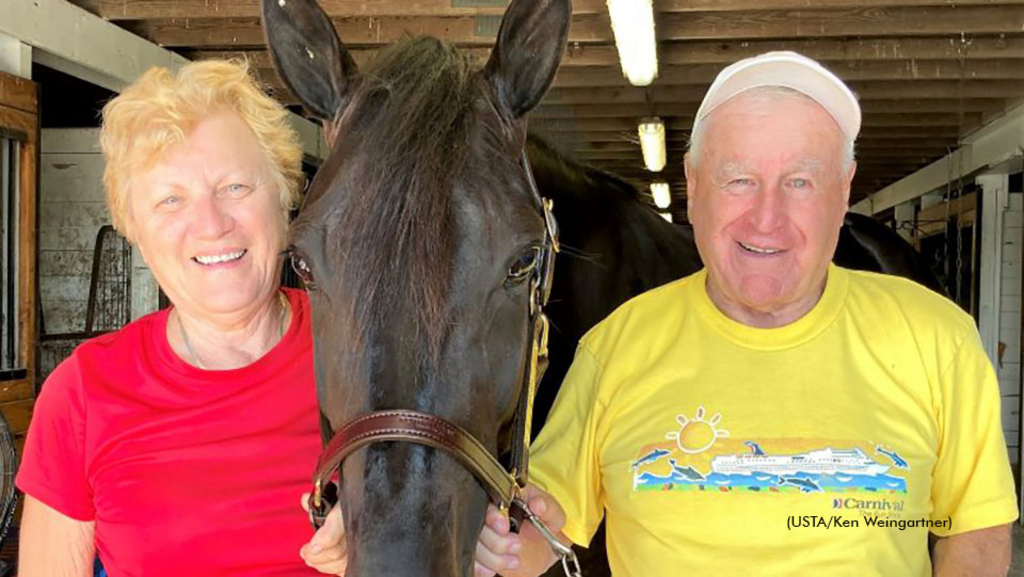 A youngster so unpromising that two of his three breeders gave their outright ownership of him to the third partner, Dandy is looking, well, just dandy right now as he went over $200,000 in seasonal earnings while winning the sole $56,250 division of a Liberty Bell stake for three-year-old trotting colts Thursday (Sept. 22) afternoon at Harrah’s Philadelphia.

The third “recipient” partner was driver Jackie Ingrassia and she reserved the son of Cantab Hall off early fractions of :28 and :58 set by Emeralds Legacy. Then, the pair began Dandy’s trademark last-half grind before the 1:26.1 three-quarters, still five lengths out at that point.

But Dandy, trained by Jackie’s husband Frank, just kept coming on, as he has all season. He was able to get up over the potential pocket rocket That Ole Bar Stool by a head in 1:55. Dandy has now won half his fourteen starts this year, three of them in Pennsylvania Sire Stakes (he was third in the Championship), and now adds a Liberty Bell trophy to the Ingrassias’ collection.

The Bar Hopping – Designable freshman gelding Designer Drink was also third in his Sire Stakes Championship, and he also won a Liberty Bell stake, taking one of the two $30,000 divisions for two-year-old trotting males. Designer Drink was raced on the lead and finished three-quarters of a length better than 28-1 shot Big Baller Beane in 1:57.3. Tim Tetrick handled the late-developing winner, now successful in two of his last three starts, for trainer Symon Spicer and Keystone Stable.

Corey Callahan and Tim Tetrick, the winners in the Liberty Bell action for babies, each won five races on the Thursday card, and between them accounted for all three of the overnight features on Philly’s “Trottin’ Thursday."

Callahan took the richest of those contests, winning the $15,300 event with the Dejarmbro gelding Star Razor on the engine in 1:53.4, his ninth win this year in fifteen starts for trainer Shaun Callahan and owners Nick Callahan, Yorwollahan Racing Team, and Gregory Godbout; Corey also got home Hayek in the $13,000 fast-class feature in 1:54.3 for trainer Per Engblom and owners Evan Katz and Frank Canzone. Tetrick, the meet’s top driver, was successful with the Muscle Hill sophomore gelding Stride The Hill in 1:54.2, winning a $14,400 contest for trainer Jim Campbell and Fashion Farms LLC.

The Liberty Bell stakes series for PA-sired horses continues tomorrow at Harrah’s Philly, with three divisions of baby pacing colts and a single section of sophomore trotting fillies ready for action. Program pages are available at the PHHA website.