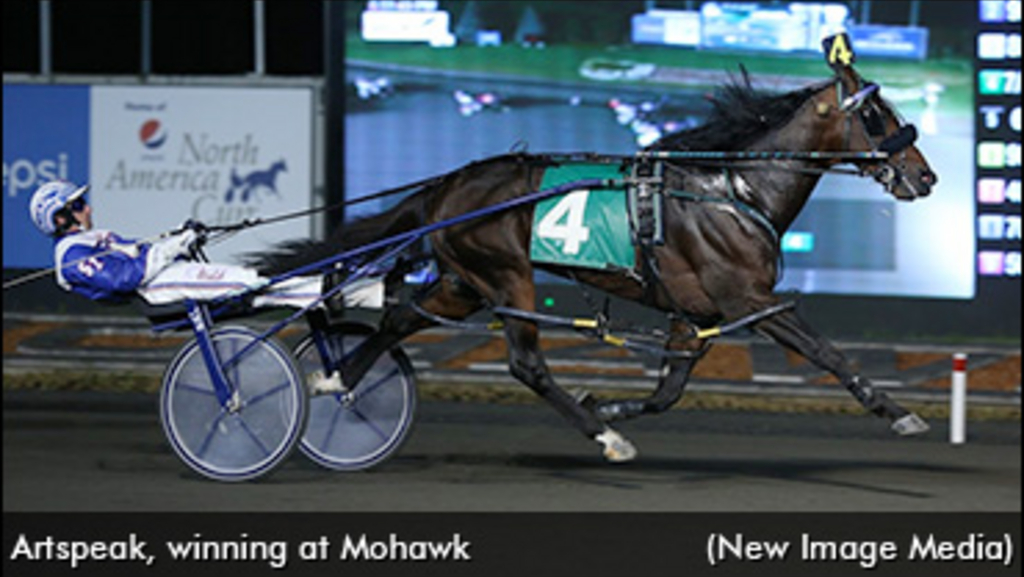 Eight years ago, Joe Sbrocco watched Hot Rod Mindale, a horse he co-owned at the time with several partners, finish second to Tell All in the Little Brown Jug. It was a moment the Ohio resident called “the thrill of my life.”

On Thursday, Artspeak will try to make Sbrocco’s life even more thrilling.

Artspeak, the 2014 Dan Patch Award winner for best two-year-old male pacer, will start from post No. 1 in the second of two first-heat eliminations for Thursday’s $677,000 Little Brown Jug brought to you by Fazoli’s at the Delaware County Fairgrounds in central Ohio. The colt, who will have Scott Zeron in the sulky for trainer Tony Alagna, is the 5-2 second choice on the morning line behind 4-5 favourite Wiggle It Jiggleit in the event for three-year-old male pacers.

Zeron became the youngest driver to win the Jug in 2012 when he piloted Michaels Power to victory at the age of 23.

A horse must win two one-mile races on the same day to capture the Little Brown Jug trophy. Fifteen horses entered the Jug and were divided into two first-heat eliminations. Lost For Words, who is stabled regularly at the Delaware County Fairgrounds with trainer Brian Brown, is the 2-1 morning line favourite in the first division.

The top four finishers in each elimination advance to the second heat. If one of the two elimination winners is victorious in the second heat, he is the Jug champion. Otherwise, the three heat-winners return for a race-off. The last race-off was in 2000, when Astreos won the event.

Artspeak, this year’s New Jersey Sire Stakes champion, heads to the Little Brown Jug off a career-best 1:48.2 win in the Simcoe Stakes on Sept. 12 at Mohawk Racetrack. The time established the stakes record, shaving one-fifth of a second off the previous mark set by 2013 Little Brown Jug champion Vegas Vacation.

Artspeak, a son of Western Ideal-The Art Museum, won eight of 10 races last year including the Metro Pace and Governor’s Cup. This season, he has won four of 12 starts and finished second in the Hempt Memorial and Cane Pace while increasing his lifetime bankroll to $1.22 million for owners Sbrocco, Brittany Farms, Marvin Katz, and In The Gym Partners.

He suffered from poor luck with the draws in the North America Cup and Battle of the Brandywine, starting from posts 10 and eight respectively, but got the coveted rail for his Little Brown Jug elimination. He will try to become the first divisional champion since Bettor’s Delight in 2001 to return and win the Jug.

“He’s had a tough year, but hopefully he’ll be the horse we’ve hoped for all year,” said the 74-year-old Sbrocco, who lives near Cleveland and has been involved in harness racing since 1970. “I’m excited, I can tell you that. I think he’s going to give a good performance anyway. He’s not a very big horse and I think he’ll take the turns well. I think now he’s ready.”

Brittany Farms won the 1993 Little Brown Jug as the owner of Life Sign. Brittany Farms owner George Segal also was part of Jug-winning partnerships with Mr Feelgood in 2006 and Tell All in 2007. His three victories are tied with Jeff Snyder and Stanley Dancer for the most by an owner in history.

Now, Sbrocco would like to know the thrill of standing in the Little Brown Jug winner’s circle himself in his state’s premier race. The event attracts a crowd of more than 45,000-plus to the Delaware County Fairgrounds, located 30 miles north of Columbus.

“I’ve been going for years,” said Sbrocco, who has been involved in all aspects of harness racing, from driving in fairs to breeding and owning horses. “It’s so much fun. I enjoy that more than anything. It’s the greatest time.”

The Little Brown Jug is the third leg of this year’s Pacing Triple Crown. Dealt A Winner won the first jewel, the Cane Pace, and Revenge Shark captured the second, the Messenger Stakes.

Following are the fields in post order for the Little Brown Jug first-heat eliminations: