Page Aims For Jug With Bythemissal 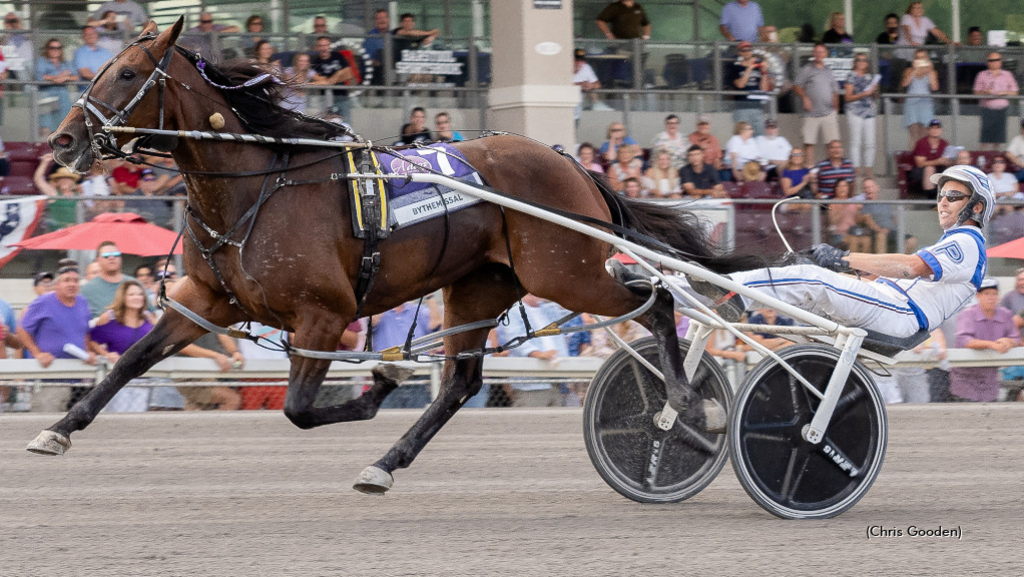 Chris Page was 10 years old when he attended the Little Brown Jug for the first time. It was 1994, Magical Mike was the race’s winner, and Page fell in love with harness racing. He has not missed a Little Brown Jug since then, a streak that will continue Thursday when he has one of the best seats at the Delaware County Fairgrounds.

Page will sit behind Bythemissal in the 77th edition of the Little Brown Jug for three-year-old pacers. Bythemissal is the 8-5 morning line favourite in the first of two $50,000 eliminations on Thursday. The top four finishers from each elim advance to the $541,550 final later in the day. Fourever Boy, trained by Tim Twaddle, is the 9-5 favourite in the second elim.

Bythemissal, trained by three-time Little Brown Jug winner Ron Burke, heads to his elimination with eight wins and two seconds in 10 starts this season. He won the Delvin Miller Adios in July at The Meadows and captured the Carl Milstein Memorial in August at Northfield Park, where he equalled the world record for a three-year-old pacer on a half-mile track.

In his most recent start on Sept. 3 at Scioto Downs, Bythemissal won a leg of the Ohio Sire Stakes in 1:50.1 over a sloppy track. The triumph pushed the gelding’s earnings to $537,750 this season.

“He handled it easily,” said Page. “He was comfortable out there, did everything professionally, had his ears up during the mile and had a lot of pace finishing. He’s been pretty impressive this year.”

Page, who began his driving career in 2000 and has won 6,139 races, entered Wednesday as the leading driver at the Delaware County Fair this week, with nine victories. He and Bythemissal will start their Little Brown Jug elimination from post two in a field of five.

It’s a much different starting position than Page’s first time in the Jug. In 2014, Page drove longshot Rediscovery in an elimination leaving from post eight, the least advantageous spot on the gate.

Not that Page cared.

“I was so pumped up to be in the Jug, it didn’t even matter,” said Page. “Just to see my name next to a horse in the Jug was awesome.”

Now, Page hopes to go one step further with Bythemissal.

Page is more than happy with the way Bythemissal has been racing for him. The son of Downbytheseaside-Dismissal made only one start at age two, winning at Dover Downs, before owner Eric Good offered Burke the opportunity to buy into the horse. In April, Burke Racing, Rich Lombardo Racing and Weaver Bruscemi joined Good as owners.

Bythemissal won his first four starts for the new connections, two in conditioned races and two in the Ohio Sire Stakes. Then Burke made some equipment changes prior to the Adios, most notably going from a closed bridle to open bridle, and the horse’s game went to another level.

“He was starting to get just a little hot on me closed up,” said Page. “There are a lot of horses that can go fast but there aren’t a lot of them that are user friendly. When Ronnie put the open bridle on him, he became push button and everything turned into my idea out there [on the track]. Right then, I said this horse is for real.

“When he’s relaxed, his moves become even bigger because he hasn’t used up energy early in the race. He doesn’t have to have the front, he doesn’t have to have a helmet, he can race any which way you want. That’s what makes a great horse in my opinion. It’s been fun to kind of jump on his coattails and ride them.”

In addition to driving Bythemissal in Thursday’s Little Brown Jug, Page will pilot Burke-trained Sea Silk in Wednesday’s Jugette, for three-year-old female pacers, at the fair. Sea Silk, who has won five of eight races this year, is the 5-2 second choice in the second of two $25,000 eliminations. The top four finishers from each elim advance to the same-day $205,100 final.

Burke has won the Jugette a record four times.

“Ronnie trained her [at Delaware] on Sunday and said she was lights out,” said Page. “I wouldn’t trade my drives with anybody. It’s exciting. The stars are kind of lining up. The rest just has to fall into place.”