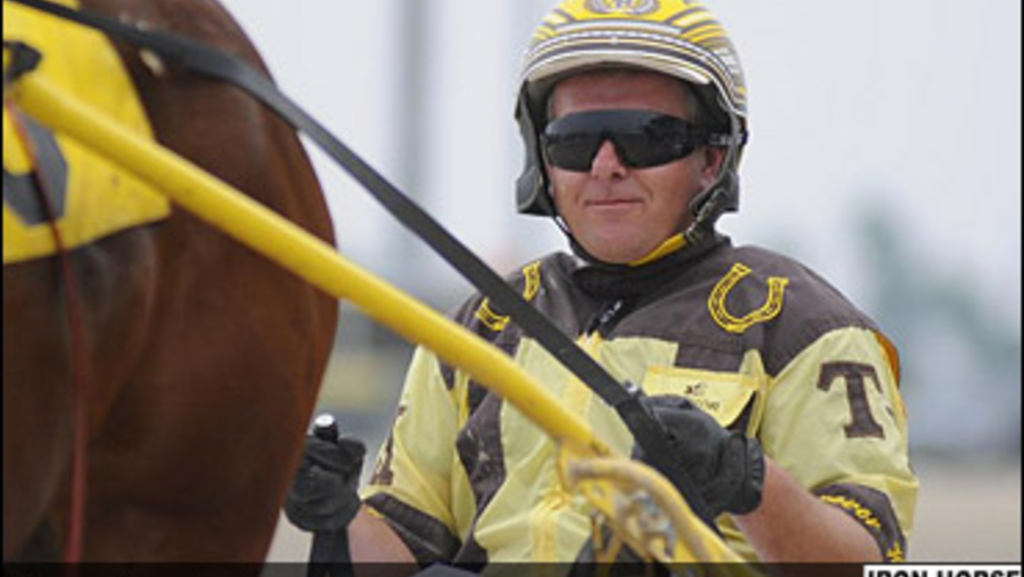 A small army of freshman pacers and trotters marched into OSS battle at Mohawk Racetrack on Thursday evening, as the Campbellville oval hosted the first round of this year’s Grassroots Semi-Finals.

Eight races – each worth $20,000 – went postward to determine the ten finalists for each of this year’s Grassroots Finals, and Trevor Henry captured three of them. The championship events – each worth $50,000 – are scheduled for Saturday, September 26.

Here’s a recap of what transpired in round one of the Semi-Finals:

Muscles For Life capitalized on a second-over trip to win his assignment for Team McNair in 1:57.3. The son of Muscle Mass-Serenity got away sixth before getting into the flow and following the cover of Holiday Bro. They all chased United Bi through fractions of :28.2, :59 and 1:28.3 before he succumbed to late pressure. Doug McNair flipped Muscles For Life off cover and the colt drew clear to win by 2-3/4 lengths over Money Mission. United Bi, Cool Creek Victory and Muscle Time also earned spots in the Grassroots Final.

Georgies Pockets rallied from out of the clouds en route to winning his assignment in 1:58.4 for driver Jack Moiseyev. The colt sat eighth throughout the opening half before advancing to seventh at the three-quarter pole. A :28.4 closing panel propelled the son of Muscle Mass-Striking Pockets past six foes in the lane en route to the win by 1-1/4 lengths over Dynamic Edge. Willyorwonthe, Gonna Fly and Asterix rounded out the top five finishers.

Michiel Vanderkemp trains the homebred for M T Pockets Stables of Pompano Beach, FL. He now owns a 6-2-0 record from eight starts in addition to a bankroll that stands at $88,650.

Myretirementticket and driver Trevor Henry turned a two-hole trip into a 1:57.1 triumph. The homebred daughter of Cornaro Dasolo-Shine Again shadowed race favourite Magical Steph through fractions of :28.3, :58.2 and 1:28.4 before popping out of the pocket and using a :28-second closing quarter to win by one-quarter of a length over that foe. Jangone, Very Classy and Dayliner also earned tickets to this year’s Grassroots Final.

Bred, owned and trained by Eli Wagler of Ingersoll, ON, Myretirementticket won for the third time this season in eight attempts. Her share of the Semi-Final loot lifted her cash stash to $33,940.

Traviata gave driver Trevor Henry the sweep in the two-year-old trotting filly division thanks to her 1:57.1 tally. The filly got away second before marching to the front in the backstretch. Once she cleared she laid down middle splits of :57.3 and 1:27 before coasting home in :30.1 to win by 4-1/2 lengths over Mariana. Liseberg, Malia and Tough Affair will advance to the Grassroots Final, as well.

Richard ‘Nifty’ Norman trains the daughter of Kadabra-Nirvana Blue Chip for Mel Hartman of Ottawa, ON and Enzed Racing Stable Inc of Allentown, NJ. It was the fourth straight triumph for the rookie who lifted her lifetime earnings to $40,000 with the win.

St Lads Smokin Hot pulled off a 9-1 upset while giving driver Trevor Henry his third Semi-Final score. The daughter of No Pan Intended-Hot Butter sat eighth through the first half of the mile before advancing steadily on the rim. She was sixth heading into the final quarter, but she uncorked a :27.4 kicker and powered away to win by 1-1/4 lengths over Noone To Depend on in 1:53.1. Sports Expert, Selling The Dream and Miss Print also earned berths into the Grassroots Final.

Richard Moreau trains the youngster for Holland Racing Stable of Niagara On The Lake, ON. It was her third win of the season, and the lion’s share of the purse bumped her bankroll to $33,820. Her breeder, St Lads Farm, will sell her Mach Three sister, St Lads Hotcakes, as Hip 84 at Sunday afternoon’s Canadian Yearling Sale.

Mayhem Seelster turned in a gritty performance to capture her assignment in 1:53 for the tandem of driver Jack Moiseyev and trainer Tony O’Sullivan. The betting public sent her off as the odds-on favourite, and she didn’t disappoint. She fought hard from first-over and eventually wore down pacesetter Southwind Shania who went toe-to-toe with Mayhem Seelster through middle panels of :55.4 and 1:23.3. Mayhem Seelster used a :29.2 kicker to win by a half-length margin over Im In Luv. Buttermilk Hanover, Southwind Shania and No Shadows took home the final prizes.

Domenic Chiaravalle of Hamilton, ON owns the daughter of Mach Three-Macapelo Rose who has yet to finish worse than second in six tries. Her 4-2-0 record has helped her stash away earnings of $43,500.

Gerries Sport was power-driven to an easy triumph in his $20,000 assignment by driver Rick Zeron. The Robbie Robinson trainee, who was sent off as the even-money choice, got away fourth before blasting to the top spot in the backstretch. He led the field through middle fractions of :56.1 and 1:24.3 before storming home in :28.2 to win by 3-1/4 lengths over Print Media in 1:53. Blue Zombie, Bingo Ingo and St Lads Moonwalk also extended their respective OSS seasons by cracking the top five.

Bred and owned by Gerrie Tucker of Montreal, QC, the son of Mach Three-Perfect Sport improved his freshman record to 3-1-2 from 10 starts while pushing his cash stash to $35,845.

Kokanee Seelster laid a front-end smack down on the foes he faced in the final Semi-Final of the evening. The son of Camluck-Kiddie Cocktail shot to the front from Post 7 for driver Phil Hudon, and the tandem didn’t look back through fractions of :27.2, :55.4 and 1:24.3. A :28.2 closing quarter was more than enough to seal the deal by 1-1/2 lengths over Tango Star in 1:53. King Of Sports, Azul Pool and Only Half Bad round out the qualifiers for the Grassroots Final.

Ming Siu of Richmond, BC and Edmund Liu of Parkhill, ON share ownership on the Anthony Montini pupil. The youngster has manufactured a 3-2-0 record from nine starts while banking $37,000 along the way.