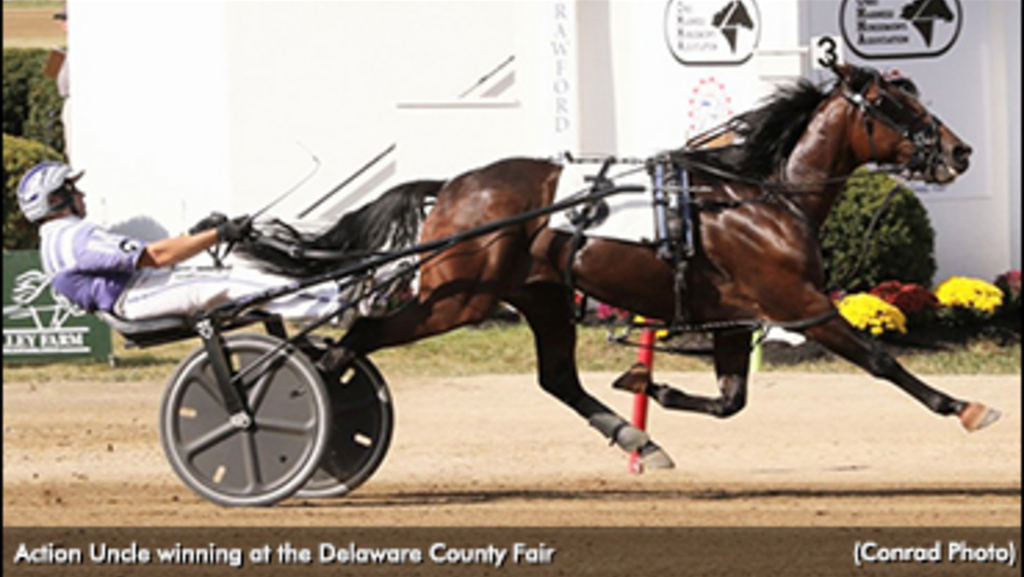 Action Uncle rewrote the record book when winning the second division of the Ohio Breeders Championship for freshman trotting colts in action Tuesday, Sept. 17 at the Delaware County Fair.

The son of Uncle Peter established a stake, track and world’s record with his 1:54 victory over Big Box Hanover and Count On Barney.

Driver Brett Miller sent the eventual winner to the top of the field before the opening quarter in :28 and controlled the remaining quarters in :56.4 and 1:25.3.

Action Uncle is trained by Virgil Morgan, Jr., who won for the 101st time at Delaware, for owner and breeder Kenneth A. Sommer Trust.

The bay colt became an Ohio “Triple Crown Winner” as a result of his previous wins in the Ohio State Fair and Ohio Sire Stakes Final.

Action Uncle’s seasonal earnings jumped to $225,575 with his third win this season.

Its Academic gained a bit of redemption in winning the first $58,550 division. The Uncle Peter colt broke in his last start, the $300,000 Ohio Sire Stakes Final, but he behaved himself at Delaware to score in a then-stakes-record 1:55.2.

When the field of seven was sent on their way, Ronnie Wrenn, Jr. sent Exhibit Class after the early lead with Buxton and Its Academic sitting second and third respectively.

Driver Chris Page tipped the eventual winner off the pylons and past Exhibit Class before the three-quarter-mile pole and cruised to a two-and-a-quarter length win over Buxton.

Its Academic is trained by Ron Burke and is owned by Burke Racing Stable, W. Donovan, Joe Sbrocco and Hatfield Stable. He now has six wins in 8 starts.