The second round of the Breeders Trophy Series for three-year-old pacers headlined the Sunday (August 8) card at the Hippodrome 3R with lifetime records taken by all three divisional winners.

The fastest of the three divisions (two for colts and one for fillies) saw Kaporal and driver Stephane Gendron cruise to victory in the fifth race, second $6,500 colt division. 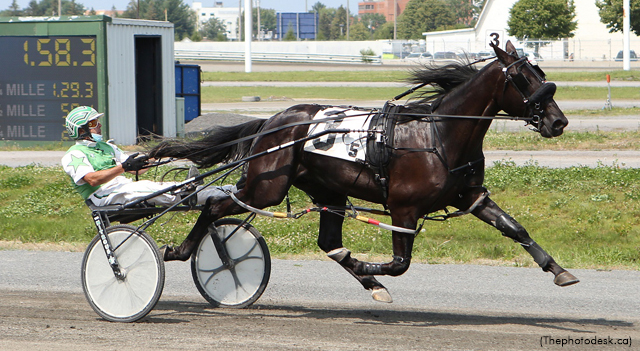 Leading from start to finish, Kaporal cut fractions of :28.1, :59.1 and 1:29.3, holding the field at bay and then scooting home to win by two lengths in 1:59.1. Y S Mathis Bro (Jonathan Lachance) was second with The Knucklebreaker (William Roy) third.

Sired by Sunshine Beach, Kaporal hails from the Francis Richard Stable. Richard trains and co-owns the gelding with breeder Ferme Auclair and Jean-Christophe Auclair. He paid $3.40 to win. It was his maiden victory after three starts.

The fourth race, first division of the Future Stars Series for the pacing colts saw 27-1 longshot Y S Bettors Legacy and driver Francis Picard shoot out to the early lead with Persistant Boy (Samuel Fillion) grabbing the two-hole spot to the opening quarter-mile in :28.1.

Arrow Magic could not gain any ground on Y S Bettors Legacy as he led the field past the three-quarters in 1:30.

Coming off the final turn, Fillion came after Y S Bettors Legacy with Persistant Boy, collaring the leader in mid-stretch and going on to win with ease by two and one-half lengths in 1:59.4. Y S Bettors Legacy held for the second with Aladdin Du Lac (Louis-Philippe Roy) third.

The time was a new lifetime mark for Persistant Boy. The win was the second straight and third of the season for the gelded son of Sportswriter, who is trained by Alain Veilleux for owner Richard Desrosilers. Persistant Boy paid $6.90 to win.

The seventh race, lone $8,000 Breeders Trophy Series division for the pacing fillies saw Streakayococo and driver Samuel Fillion take the lead away from Sunjet Ray (Louis-Philippe Roy) after a :29.1 first quarter and then led the rest of the race, winning by one length in 2:00.2. Sunjet Ray was second with D Gs Shallow (Jonathan Lachance) finishing third.

It was the maiden victory for Streakayococo in only two career starts. The Artspeak filly is trained by Dany Fontaine for owner/breeder Raymond Primeau and co-owner Marc Andre Cyr. She paid $7.10 to win.

The fastest mile of the season at the Hippodrome 3R took place in the ninth race, $5,500 Preferred Handicap Pace. The 1-9 favourite was Mickeymaksomespeed with driver Louis-Philippe Roy and he tore off out of the starting gate and never looked back. They cut fractions of :27, :55.4 and 1:24.2 and said goodbye to the field, winning by more than six lengths in 1:53.3. That time tied the lifetime mark of Mickeymaksomespeed ($2.30), who won for the fifth time this year for owner/trainer/breeder Michel Allard.

In the first race, $5,000 Preferred Pace for the mares, Sophies Cam ($6.60) led from start to finish for driver Stephane Brosseau, winning by one length in 1:56.4. Pocket-sitting Shes Movin On (Samuel Fillion) was second with race favourite Topsill Beach (Louis-Philippe Roy) third.

The eighth race, $5,000 Preferred Trot saw driver Louis-Philippe Roy finally make it to the winner’s circle. He sent Precieuse CC ($3.40) right to the front and then held off the pocket-sitting Choo Choo Blue (Stephane Gendron) in a tough stretch battle to win by a quarter-length in 1:58.3. Gloire Dream (Jocelyn Gendron) was third.