New York did itself proud Saturday night, as Empire-breds won both $40,000 eliminations for Yonkers Trot No. 61.

When the stone dust settled, it was a pair of Ron Burke entities, Crazy Wow (Tim Tetrick, $5.30) and Habitat (Yannick Gingras, $6.30), who led the lads into next Saturday’s (Sept. 5) half-million-dollar final.

Saturday’s first elim saw another statebred, Buen Camino (Trond Smedshammer), win the draw and the early battle. He seated everyone, including Crazy Wow from post position No. 2 and Hambletonian champ Pinkman (Gingras) next door in post No. 3.

Buen Camino led through intervals of :28.1, :58.2 and 1:27.2, with 1-2 favourite Pinkman advancing from third. Pinkman then seemed to pull himself up, as Buen Camino owned a length and three-quarter lead into the lane. Crazy Wow ducked in — cutting inside at least one pylon — and went by, whipping a resurgent Pinkman by a length in 1:55.4. The winner had to survive an inquiry before the result was certified.

Buen Camino held third over a closing Workout Wonder (Dan Dube) — both getting berths in the final — with Wings Of Royalty (catch-driver Brian Sears) last at every station.

For second choice Crazy Wow — last season’s New York Sire Stakes frosh champ — a son of Crazed co-owned by Deo Volente Farms, Our Horse Cents Stable and J&T Silva Stables, the win was his sixth in 10 seasonal starts. The exacta paid $11.40, with triple wagering not offered to the small field.

“He was very good last week [winning Pocono’s Colonial] and just as good tonight,” Tetrick said. “Things were a bit tight in the last turn, but he needed to trot, he did.”

As for Pinkman, “He did start to get away from me a bit in the last turn, and I didn’t want to lose him,” Gingras said. “So I had to steady him, and showed his class by trotting well in the lane.”

The job of the second choice was made much easier when 3-5 fave Centurion ATM (Ake Svanstedt) couldn’t get out of his own way behind the gate and again past the half.

The other Svanstedt-trained (though uncoupled) number, Southwind Mozart (Dan Dube), chased from a loose pocket, beaten a couple of lengths. Billy Flynn (Jason Bartlett) and French Laundry (Sears) also earned seats at next week’s table, while Massive Lightning (Tyler Buter) and a foul-gaited Centurion ATM did not.

For Habitat, a son of Conway Hall, co-owned by Burke (as Burke Racing), Weaver Bruscemi and Our Horse Cents Stables, he’s now six-for-13 this season. The exacta paid $67, with the triple returning $287.

“Once I saw [Centurion ATM] make a break, there was no reason not to cut the mile,” Gingras said. “He was very good, no issues.”

The open draws for both Yonkers Trot No. 61 and the $500,000 Messenger Stakes No. 60 (only eight entrants, so no elims) take place Tuesday morning.

“I told [driver] Jason [Bartlett], ‘Just get the same trip as last week.’" 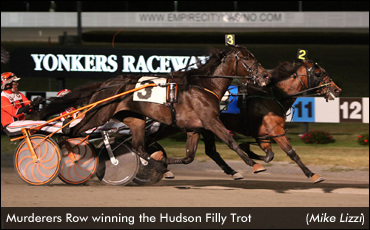 A week after skimming the cones to win her elimination (at 11-1), the three-year-old daughter of Donato Hanover and Housethatruthbuilt offered an encore in the sport’s richest race of the evening.

With tepid, 2-1 choice (and other elim winner) Bright Baby Blues (Brian Sears) making a break while looking for an eight-hole seat, Lady Winona (Andy Miller) made the lead. Murderers Row, starting in one notch from “Winona” at the pylons, settled in behind.

That one couldn’t sustain here bid, but “Winona” couldn’t stall Murderers Row. The latter angled in and won a protracted stretch battle by a nose. Third went to Scented Roses, barely holding off a closing Wouldnt Itbesweet (Larry Stalbaum), while Oh My Darlin (Dan Dube) — stablemate to the third-place finisher — earned the last pay envelope.

For fourth choice Murderers Row, co-owned by Steve Jones, Mary Kinsey and Ted Gewertz, the win was her second (consecutive) in eight seasonal starts. The exacta paid $28.40, with the triple returning $62.50.

“Quite frankly, she’s been a disappointment,” Sylvester said of the pre-Hudson seasonal maiden. “I wasn’t sure she could step up, but she did.”

Murderers Row’s dam, Housethatruthbuilt, won this race in 2004 when it was contest at Hawthorne. The lone big-track edition of the Hudson resulted in the stakes record of 1:53.4.

The $116,430 Maud, which attracted just a half-dozen three-year-old pacing fillies, saw Purrfect Bags in play early from post position No. 2.

Bettor N Better engaged the people’s preference toward a 1:24.4 three-quarters, with Purrfect Bags owning a stubborn, half-length lead into the lane.

She then closed the sale, winning by a length in 1:53. Bettor N Better fought the good fight for second, with Strut My Stuff, Repeat Please (Yannick Gingras) and Cheyenne Robin (Dan Dube) coming away with the small change. Heaven On Earth (Tim Tetrick) lost the fifth-place photo and was left with only lovely parting gifts.

For Purrfect Bags, a daughter of Roddys Bags Again brought to town from Delmarva by the Kings — owner JoAnn and trainer Jim Jr. — the win was her eighth (fifth consecutive) in 10 seasonal starts (15-for-18 lifetime). The exacta paid $10.80, with the triple returning $21.80.

“When she won the Lismore [in May at 11-1], no one knew a lot about her,” Kirby said of Purrfect Bags. “When she came back here, she had their respect.”