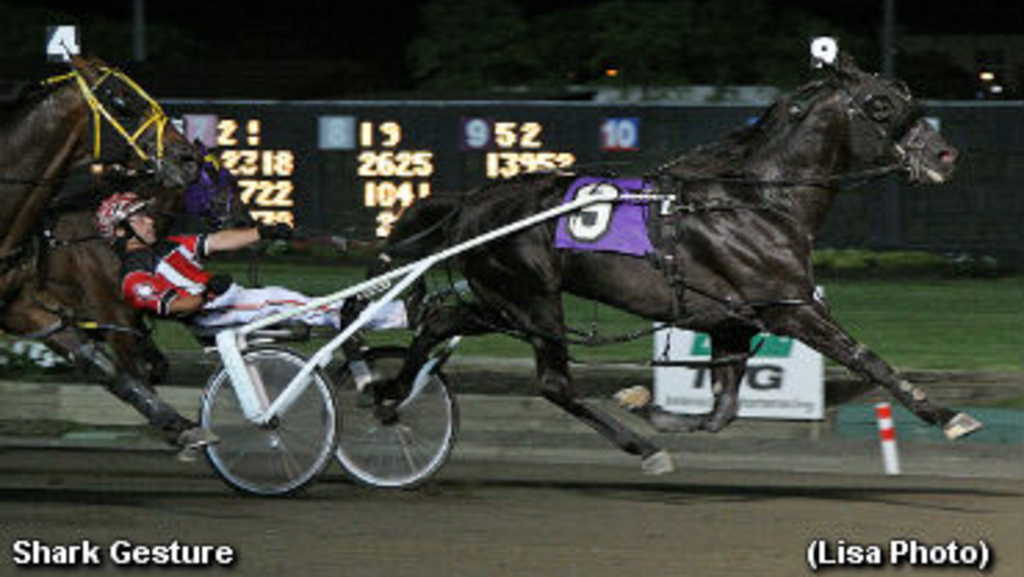 Shark Gesture’s bid for a second consecutive win in the Canadian Pacing Derby will begin from post No. 8 on Saturday night at Mohawk Racetrack

Shark Gesture, who won last year’s race by two lengths over Bettor Sweet, was joined by Vintage Master and Won The West in accepting byes into Saturday’s $780,000 final.

Shark Gesture is the No. 1-ranked horse in harness racing’s weekly Top 10 poll. He has won seven of 10 races this season and finished no worse than second in any start. He has earned $918,875 for trainer Larry Remmen, driver George Brennan, and owners Norman Smiley, Gerald Smiley and TLP Stable. Shark Gesture’s most recent effort was a win in the $702,500 William R. Haughton Memorial at the Meadowlands on August 20.

Hypnotic Blue Chip won the single elimination for the Canadian Pacing Derby, beating Bigtime Ball by 1-3/4 lengths in 1:48.3. He is driven by Jody Jamieson, trained by Kevin McDermott, and owned by Francis Azur. He has won six of 19 starts this season and earned $518,685. He was second in the Haughton and won a division of the U.S. Pacing Championship on August 7 at the Meadowlands with a world-record 1:47.2 mile.

The victory gave Hypnotic Blue Chip’s connections the chance to select the horse’s starting spot. He will begin the final from post No. 2.