It was a good night at the office for trainer Erv Miller as he made a clean sweep of the stakes action at Harrah’s Hoosier Park Racing on Tuesday, Aug. 27 and had a total of three training wins on the evening’s 10-race card.

Two $64,000 divisions of Indiana Sires Stakes for two-year-old trotting fillies were featured on the evening’s 10-race card as the fillies were sparring in round four of the six round series.

Rock Swan took advantage of a costly break by the post-time favourite to go gate to wire in the opening round of the stakes action and score in 1:56.1. The undefeated filly, May Baby, had her four-race win streak snapped after she made an uncharacteristic break behind the gate.

Driven by Trace Tetrick, Rock Swan left alertly from post 3 to grab the early lead through the opening panel in :29.1 while RJZ First Lady and John DeLong secured the coveted pocket seat. Rock Swan raced uncontested through middle splits of :59 and 1:29.

As the field turned for home, May Baby had recovered and was up to engage the leader. RJZ First Lady also tipped from the pocket to take aim at the leader but Rock Swan was up to the challenge. Using a :27.1 closing panel, Rock Swan kicked away from the lead and kept her challengers at bay to get the win by a length. RJZ First Lady trotted evenly for second while May Baby rallied well late but was forced to settle for third. Sent at odds of 5-2, Rock Swan returned $7.20 at the betting windows.

“That’s the best she’s raced all year,” Tetrick said after the victory. “She was good on the front and when those other horses came to her, she trotted right on. She was strong all the way to the wire, she wanted to win tonight.”

With the win, Rock Swan recorded her third-straight victory and second-straight Indiana Sires Stakes victory. The daughter of Swan For All-Jolly Jessica recorded her fifth win from six lifetime outings and established a new lifetime best in the process. Rock Swan also pushed her lifetime earnings over the $100,000 mark for owners S&R Racing and Anthony Lombardi.

Trainer Erv Miller found the winner’s circle in the very next race on the program and then went on to record his third consecutive victory on the evening’s program in the second division of the stakes action after Woodside Datendiva and Ricky Macomber Jr. were able to avoid traffic issues and pull the 22-1 upset. In a race rued by miscues, Woodside Datendiva stayed on task and trotted evenly to the wire to score in a lifetime best of 1:56.3.

Trace Tetrick had the even-money favourite Collettes pointed to the front and she dictated early fractions of :28.1 and :57.4. La Nancio and Jared Finn were the benefactors of a pocket trip while Woodside Datendiva was content to track from third. As the field approached the three-quarters in 1:27.2, Collettes was joined on the outside by Id Rather Be Red and Brandon Bates.

Turning for home, Collettes made a costly break and took herself out of the race and as soon as Id Rather Be Red inherited the lead, she also went off-stride. Macomber Jr. kept Woodside Datendiva on task and avoided the breakers to reach the wire in front. Bluebird Ladyluck and Dan Shetler also avoided the traffic issues to finish second while La Nancio rounded out the trifecta. As the second longest shot on the board, Woodside Datendiva returned $46.80 for the victory. 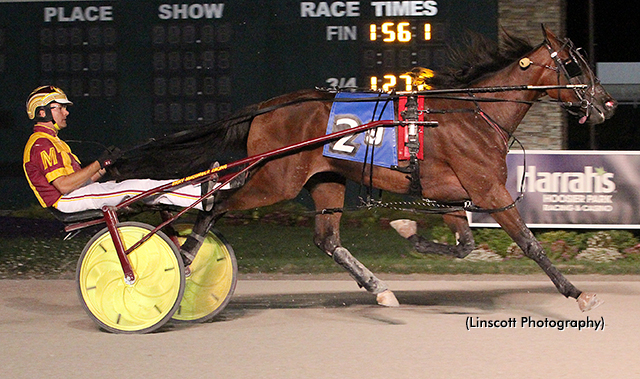 “Sometimes it pays to be lucky,” trainer Ricky Macomber Jr. said after the victory. “This filly raced really well tonight but we got lucky and didn’t have any issues with all the breakers. She’s a very nice filly to drive.”

With the win, Woodside Datendiva recorded her third win of the season from eight trips behind the gate. Owned in partnership by Ervin Miller Stable Inc. and Robert McCormick, the daughter of Guccio-Cantab’s Choice pushed her lifetime bankroll to $49,832.