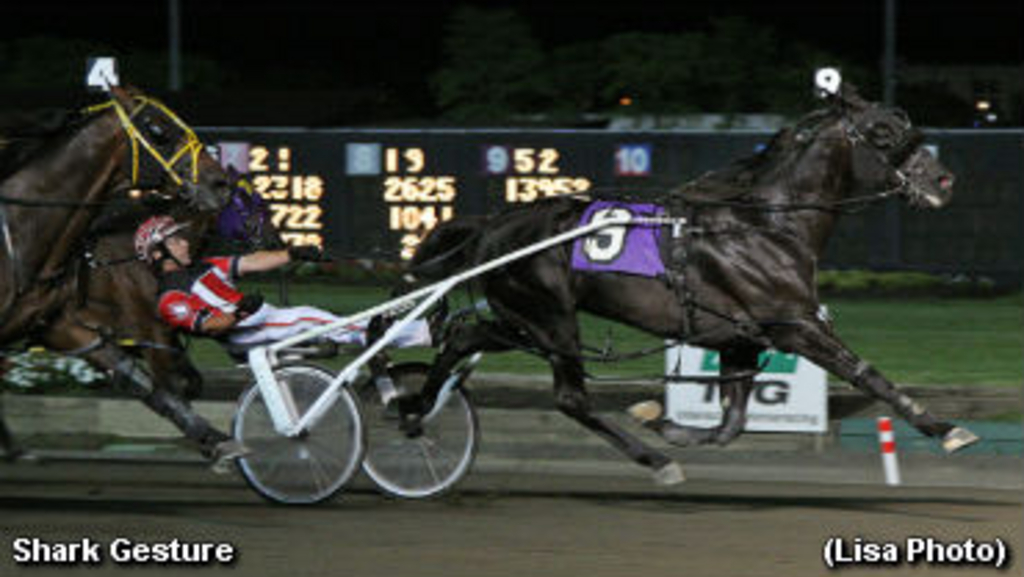 The final program of racing for the Summer Meet at the Meadowlands took place on Friday evening, and it was a blockbuster card filled with an assortment of the sport's highest profile stakes performers

Here’s a complete recap of each of the events:

A 60-1 upset was engineered by driver David Miller with Honky Tonk Woman in the $402,400 Sweetheart Final for two-year-old pacing fillies, and that put a smile on the faces of the longshot players.

The daughter of Western Ideal-Allamerican Raquel returned $123 for every $2 plunked on her nose by the bettors, and more importantly she earned a sweet payday of $201,200 for the partnership of the Let It Ride Stables Inc, Robert Cooper Stables LLC and the filly’s trainer, Jeff Webster.

Mothermayi Hanover (Andy Miller) and Show And Tell (Yannick Gingras) battled to the quarter pole in :27.2 before the latter was allowed to clear. Show And Tell led the field to the half in :55.2, but she came under pressure in the third quarter from race favourite Ace Of Pace (George Brennan), who got underway right at the mid-way point.

Ace Of Pace eyeballed Show And Tell at the three-quarter pole in 1:24.2 before putting away that tempo-setting foe, but the previously unbeaten Mark Ford trainee couldn’t hold off a pair of live threats from the backfield. Both Ms Malicious and Honky Tonk Woman surged late with Honky Tonk Woman getting the edge by a nose over Ms Malicious in 1:52.3. Ace Of Pace was third.

“I thought she had a very outside chance,” said driver David Miller when asked about his filly’s chances of winning. “She’s been racing decent, and the race worked out. I was very surprised when George [Brennan] pulled and she [Ace Of Pace] didn’t zip to the lead. It gave me good cover right to the top of the stretch, and my filly did the rest.”

It was the first win in four lifetime starts for Honky Tonk Woman, who was purchased for $18,000 from last year’s Harrisburg Yearling Sale. She has banked $207,675 to date.

David Miller celebrated his second major victory on the Friday program at the Meadowlands thanks to a 1:51 triumph in come-from-behind fashion with the Jim Campbell-trained Fashion Delight.

The two-year-old son of Bettors Delight-B Js Sunshine w uncorked a :26.3 final quarter kick to win for the third time in five career starts. Line Officer was a solid runner-up and Rollwithitharry came on late to finish third. Race favourite Grams Legacy cleared to the lead in deep stretch, but made a late break and wound up finishing fourth but was placed eighth.

“He was a nice colt training down, and actually Dave [Miller] went with him his first two baby races and the first time he sat behind him he got off and he said ‘I really like this colt a lot’,” said trainer Jim Campbell. “I know Mr. and Mrs. Siegel are watching him right now and I know they’re very proud of him.

“We’ll see how he comes out of this; he’s not eligible up in Canada by design because it’s tough to do both Wilson and then go up there for the Metro,” added Campbell when asked about the colt’s schedule. “We’ll give him a couple of weeks off and get him ready for the Breeders Crown.”

Fashion Farms LLC of New Hope, PA owns the colt, who bumped his lifetime earnings to $275,950 with the win. He was a $35,000 purchase from last year’s Harrisburg Yearling Sale.

Driver John Campbell worked out a perfect pocket trip behind a white-hot pace for Tug River Princess, and the five-year-old daughter of Badlands Hanover-Aucryifiwanto didn’t let it to go to waste en route to winning the $257,000 Golden Girls.

Campbell had the Jeff Webster-trained mare on the lead through a :26.3 opener before releasing this year’s Lady Liberty champ, On The Glass (Yannick Gingras), to the top. On The Glass hit the half in :53.4 before being prompted by Ginger And Fred (Brian Sears) to the three-quarter pole in 1:22.3. Dreamfair Eternal (Randy Waples) was poised to make a late kick while riding cover from second over.

The mares fanned out across the track in the lane and a patient Campbell managed to find a seam late en route to posting the 1:49.3 triumph with Tug River Princess. It was a career-best tally for the mare who edged out runner-up Ginger And Fred by a nose. On The Glass finishing third and Dreamfair Eternal took home fourth prize.

“She’s just a great mare; she’s been a pleasure to drive since they started with her as a three-year-old and I just love her to death because she always gives you a good effort and she’s such a tough mare year in and year out,” said driver John Campbell. “Sometimes she doesn’t get out of the gate as good as others; tonight she was right on her game and she out on the right foot and I think that was the key to the race – to be forwardly placed.”

As tough as they come, Shark Gesture roared from off the pace to defend his title in the $702,500 William R. Haughton Memorial for the tandem of driver George Brenan and trainer Larry Remmen.

Real Joke (Tim Tetrick) parked Mr Wiggles (Andy Miller) through fractions of :25.4, :52.3 and 1:20.4, and that took the wind out of their sails and set it up for the backfield. Shark Gesture tipped off cover and used a :27.1 final frame to hold on for the half-length score over Hypnotic Blue Chip (Jody Jamieson) in 1:48.2. Race favourite Won The West (David Miller) was a lapped-on third in what turned out to be a blanket finish.

Norman Smiley, Gerald Smiley and the T L P Stable of New Jersey share ownership on the pacer who has put together a 7-3-0 record in his first 10 starts of the season. The 27-time winner lifted his lifetime earnings to $2,890,594 with the winning effort.

The 1:48.2 victory was the thirteenth sub-1:50 victory for the seven-year-old son of Cams Card Shark-Simple Gesture. That ranks him fourth in the all-time list of sub-1:50 performers behind Lis Mara (16), Mister Big (14) and Admirals Express (14).

Live harness racing returns to the Meadowlands on Saturday October 23, for the start of a 17-day Fall Harness Meet. Live racing will be held every Friday and Saturday night through December 18.