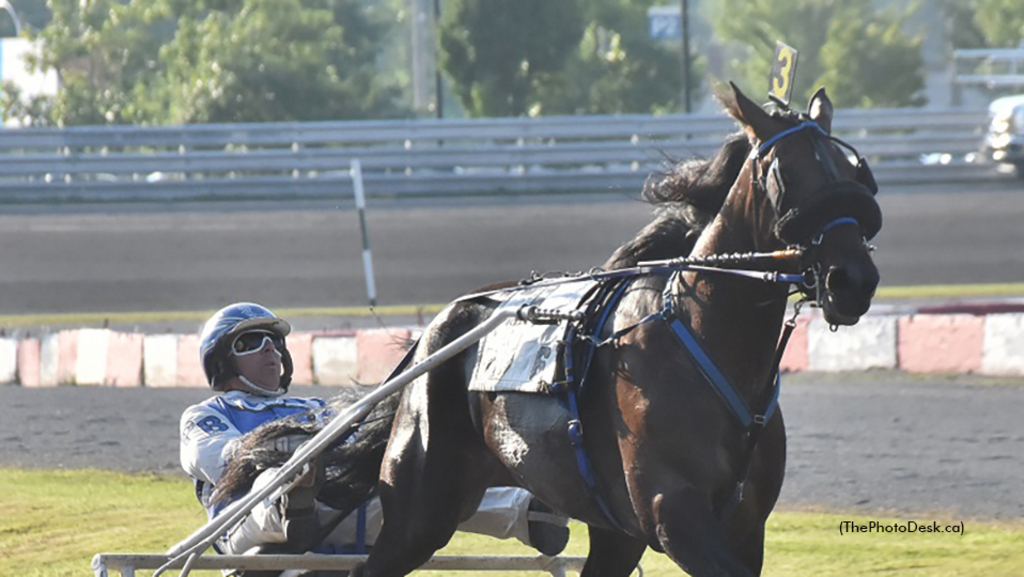 Stella Alpha scored in a romp in capturing the $10,000 final leg of the Breeders Trophy Series for three-year-old trotters at Hippodrome 3R on Friday (Aug. 19).

The win was the eighth of the year from 16 starts for Stella Alpha, with seven of those wins coming at 3R, making her the winningest horse of the race meet.

Driven by 3R’s leading driver Pascal Berube for leading trainer Sylvain Tremblay, Stella Alpha got away in third place as the sixth race co-feature for the fillies started off with Cleveland Moneyka (Stephane Brosseau) going to the early lead. Once settled, Berube came right after the leader with Stella Alpha after a :29.2 opening quarter-mile and took command. The Royalty For Life filly then opened up on the field, setting fractions of :59.4 to the half and 1:29.1 to three-quarter en route to the 4-1/2-length victory in 1:58.3. HP Felicity (Robert Shepherd) was second with La Bromontoise (Jerome Lombart) third.

Owned and bred by Tremblay’s Ecurie Alpha of Metabetchouan, Que., Stella Alpha paid $3.20 to win as the wagering favourite.

In an even bigger romp, Royalty Beer and driver Kevin Maguire won the $10,000 colt division of the Breeders Trophy Series.

In the non-wagering race due to just four starters, Royalty Beer got immediate separation from the field as he cut fractions of :29.1, :58.3 and 1:28.2 before pulling away in the stretch to win by 9-1/2 lengths in 1:58.4. Sammy Justice (Pascal Berube) was second with Cleveland Massimo (Robert Shepherd) third.

The winning time was a lifetime mark for Royalty Beer, who won for the third time in 11 starts this year.  The Royalty For Life gelding is trained and co-owned by Jean-Francois Maguire along with breeder/driver Kevin Maguire's Ecuries Maguire Stable.

Both Stella Alpha and Royalty Beer will now headline their respective $65,000 finals of the Breeders Trophy Series at 3R on Sunday, Sept. 11.

Track Notes: Live harness racing resumes on Sunday (Aug. 21) at 3R with the third and final preliminary leg of the Breeders Trophy Series for three-year-old pacing fillies and colts featuring is the undefeated filly Majo Sport Bella while the colts are headlined by return winners Aladdin, Titanium Alpha and Jack Panic. Post time on Sunday is 12 noon.