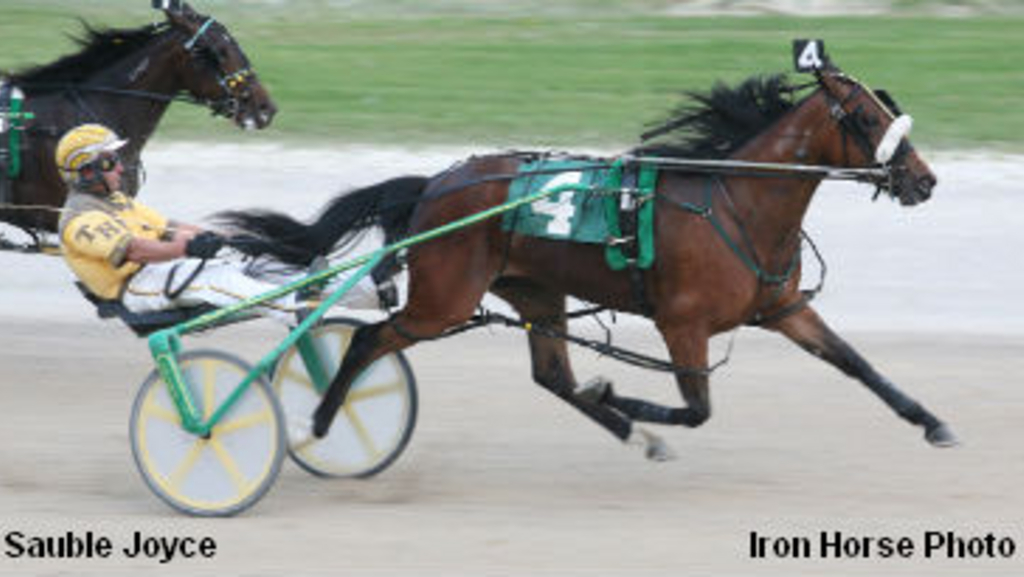 Longshot lovers had a field day in the O.S.S. Gold Series eliminations for two-year-old pacing fillies at Grand River Raceway on Monday evening

thanks to a pair of double-digit upsets.

Modern Connection left like a rocket in the first elimination, and despite some funky steps in the first turn she minded her manners and rallied late in the mile to post a 1:56.4 score for driver Doug McNair. Sent off at odds of 10-1 in her pari-mutuel debut, the Modern Art-Cambest Connection miss kicked home in :29.3 to pick off Lyons Puddin Pie (Jody Jamieson), who was sent off as the 3-5 favourite. Shipps Xanadu (Randy Waples) made multiple moves in the mile and finished third, with Brush With Royalty (Mike Saftic) grabbing fourth prize.

Sauble Joyce stormed home in :28.2 in the second tilt and stopped the clock in a career-best clocking of 1:56 for driver Trevor Henry. The Larry Hall-trained homebred daughter of Million Dollar Cam-Sauble Gert, who sat a pocket trip behind Montenegro (Mike Saftic) through fractions of :28.3 and :58.3, showed a short lead at the three-quarter pole in 1:27.3 before using a :28.2 final frame to draw clear by 1-1/2 lengths over the 3-5 favourite Lyons Carrie (Jody Jamieson). Montenegro faded to finish third and Modern Wind (Duke Sugg) was fourth.

Bred and owned by Sauble Hill Farms of Tara, ON, Sauble Joyce now boasts a 1-1-0 record in her first two tries.

The top four finishers from each of Monday’s eliminations will advance to the final on Monday, July 12 at Grand River Raceway. Here are the results of the post position draw for the final: