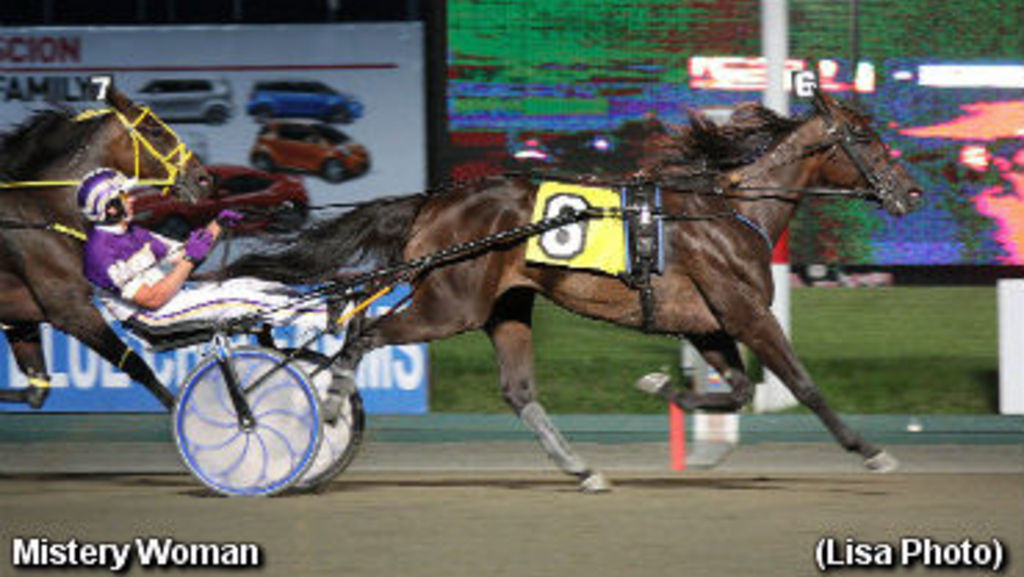 Trainer Jonas Czernyson thinks Mistery Woman is getting better with every start. The question is whether her “better” is going to be enough to beat the best in Saturday’s $500,000 Hambletonian Oaks at the Meadowlands Racetrack.

Mistery Woman won one of last weekend’s two $35,000 Hambletonian Oaks eliminations, beating Classic Martine by 1-1/4 lengths in 1:53. The other elim went to Bee A Magician, who topped another Czernyson trainee, Ma Chere Hall, by two lengths in 1:53.3.

Bee A Magician is undefeated in eight starts this year and is the No. 2-ranked horse in harness racing’s Top 10 poll, trailing only 3-year-old male pacer Captaintreacherous. On July 13, Bee A Magician won the $265,500 Delvin Miller Memorial at the Meadowlands by 4-1/2 lengths over Frau Blucher and 4-3/4 lengths over Mistery Woman in a world-record 1:51.

For her career, Bee A Magician has won 18 of 21 races and earned $1.2 million for trainer Nifty Norman and owners Melvin Hartman, Herb Liverman and David McDuffee.

“She’s the one to beat, for sure,” Czernyson said. “She’s a very tough (filly) and tough to beat. But that’s what we’ve got to hope for. We’ve got two in there and hopefully if things go our way we can do some good. I’m hoping for a good draw and hopefully we can mix it up a little.”

Mistery Woman has won two of seven races this year, finished in the top three a total of six times, and earned $147,543 for owners Misty Miller, Bill Donovan, Michael Taranto’s Aldebaran Park Inc. and Millstream Inc., which is Czernyson and his wife Christine.

“I thought she raced really good (in her Oaks elimination),” Czernyson said. “David was happy with her. We’re in and now we have a week to work on it and hopefully we’ll be ready for the final. She’s been racing very good all year long. She’s been going against all the top horses and has been getting better and better.”

Last season, Mistery Woman was slowed in getting to the races because of a foot issue and illness. She was limited to five starts but won three, including the Standardbred Stakes and a division of the International Stallion Stakes on her way to $88,177 in earnings.

Czernyson, who won the 2005 Hambletonian Oaks with Jalopy, will send two starters in the Oaks for the second consecutive year as Ma Chere Hall joins Mistery Woman in Saturday’s field.

Ma Chere Hall has won two races this year, a division of the Currier & Ives and a division of the Reynolds. She was second by a neck to Hambletonian-bound colt E L Rocket in 1:53.4 on June 21 at the Meadowlands. Her only misstep this year came in the Miller, where she went off stride and finished ninth.

“She’s been racing pretty good so far this year,” Czernyson said. “She won the Reynolds from the outside from way before the half and is a pretty tough filly. In the Miller, another horse was tiring a little bit in front of her. She was coming backward as we were going forward and (driver Corey Callahan) had to kind of check her. That didn’t really help her.”

The draw for the Hambletonian Oaks, as well as the $1.2 million Hambletonian, is 3 p.m. Tuesday.