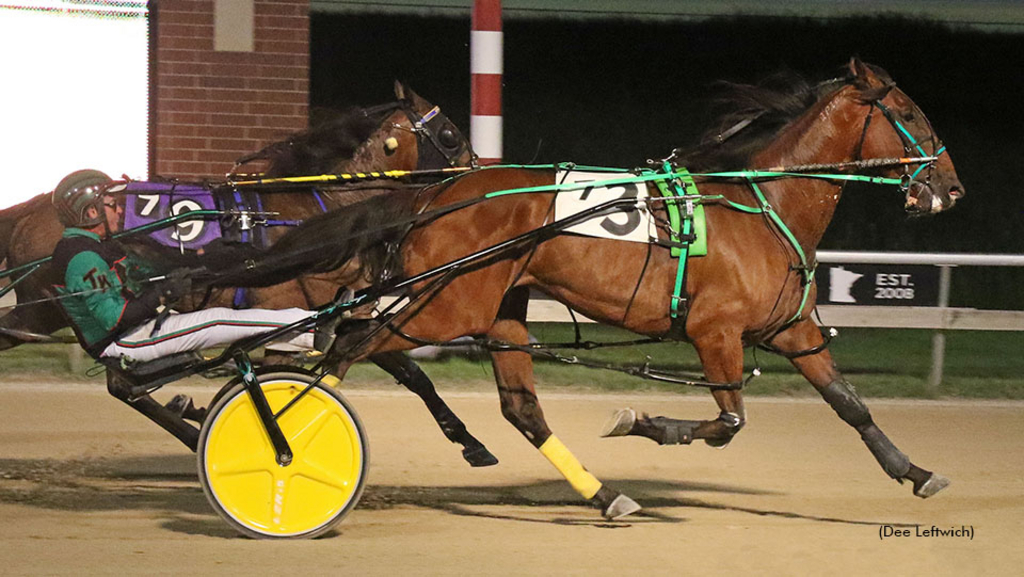 The 2022 Dan Patch Free-For-All Pace at Running Aces did not disappoint and the $50,000 event provided fans with a thrilling action-packed contest from start to finish.

Caliber (Luke Plano) blasted away from the gate from post one to grab the early lead and Zanetti (Brady Jenson) utilized his early speed to secure the pocket while John De Long left from the outside post with heavy favourite Little Rocket Man to find a seat in third during the :26.4 opening panel.

Little Rocket Man did not sit in for long and was activated once again by De Long just before the (:55) half with a first-over attack down the backside.

A Major Omen (Tony Kerwood) had gotten away fourth early and jumped on the opportunity to pick up the cover behind Little Rocket Man as they headed towards the final turn. Caliber tried to run away from his rivals by posting a :26.1 third panel, which put him four lengths on top as they began to round for the stretch.

Both Little Rocket Man and A Major Omen were cutting into the margin nicely as they straightened for home and the top three were fanned across the track for the final sixteenth of the mile for a thrilling deep-stretch battle. A Major Omen ($53.60) was rolling fastest of the trio in the final yards and was able to surge past the two favourites for the victory by three-quarters of a length over Little Rocket Man in 1:50.4, with Caliber a further length back in third. Major Offense rallied late to pick up fourth money.

Just after the race, winning driver Tony Kerwood stated, "He raced awesome for me... those two on the inside had a lot of speed so I figured I would get away behind them then the favourite came around me and I figured I would follow him.

"They went for a quick sprint down the backside and I didn't know quite what to think at that point, but we just kept chugging along and he kicked in, and when they were getting a little tired in front of him, he kept going."

The winning owner/trainer, Gerald Longo, also shared his post-race reaction: "I knew the one horse was going to leave out, I had no idea De Long was going to leave, and fortunately we were able drop right in, and then we got to follow the favourite."

Longo went on to say, "Down the backstretch I thought we might get fourth then I kept saying 'Keep coming! Keep coming!'... I noticed he was getting closer and I thought we could get third... then this, it's unbelievable... the biggest thrill of my career. This horse is a super horse, he is like a truck, and he does nothing wrong in the barn. I told the driver to keep driving him and he will keep coming. He did and we were lucky to get there."

The big win in the feature event completed a perfect night for the Longo stable, with three starts and three wins on the program.

The winning groom is Rich Aboody.

All American N capped off another four-win night for leading driver Luke Plano, capturing the $16,500 Open Handicap Trot in 1:56.2 for his fifth win in six starts. He moved to the front just past the quarter and never looked back. Bringoverthemoney was second best and Mind Yown Business picked up the show. He is owned and trained by Maria Alvarez.

Live racing returns to Running Aces on Tuesday (July 26) with a nine-race program that gets underway at 7 p.m. (CDT) and features 'Dollar Night' specials.

(With files from Running Aces)