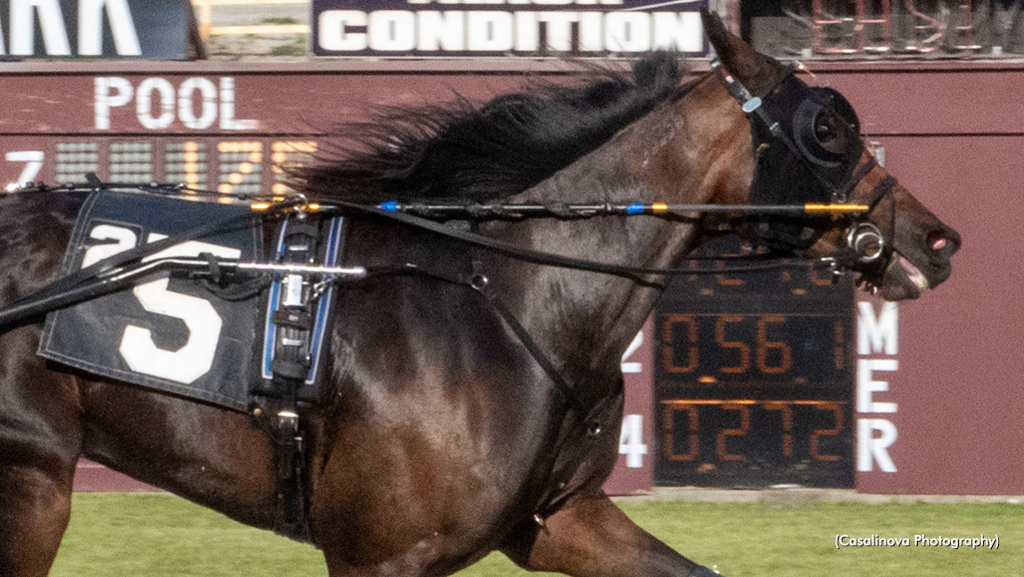 Leaving from post four, Herculisa made the lead easily through the first eighth of a mile. She led MVP Luke by 1-1/4 lengths at the quarter in :27.2. Herculisa worked a slight breather through a :28.4 second panel with the field in straight alignment at the half. Entering the backstretch, Winning Shadow floated to the outside to take his best shot at the confident mare. Driver Brett Miller stepped on the gas passing three-quarters in 1:24 leading by 2-1/2 lengths over Winning Shadow. Through the stretch, Miller called on Herculisa and she responded, opening to win by two lengths in a track record time of 1:52.1 for four-year-old trotting mares.

Her time shattered the record of Impulse Buy, who set a mark of 1:53.4 in 2021. Winning Shadow was clearly second, while MVP Luke weakened to finish third. Smoking Jet (Ronnie Wrenn Jr.) closed gamely to finish fourth.

Herculisa is owned by Jesmeral Stable of Scarsdale, New York and has amassed $553,070 in career earnings for trainer Virgil Morgan Jr.

Sophomore colt and gelding pacers took to the Flying Turns on Sunday night for the third leg in the Buckeye Stallion Series with Fluff Yeah and Pearl Snaps picking up their second wins in the series.

In the first of five $17,500 divisions, Fluff Yeahl set a new life of 1:51.3 winning by 1-1/4 lengths with Tony Hall in the bike.  Hall took the pocket trip with the Pet Rock gelding, swinging wide around the final turn and catching the leader down the stretch.  Brett Schwartz trains Fluff Yeah, who won for the third time this year, raising his earning this year to $45,500.

The other repeat winner came in the final division as Pearl Snaps and Brett Miller grabbed the lead at the half-mile mark and cruised to the win in 1:52.4.  Virgil Morgan Jr. trains the son of Fear The Dragon.  Pearl Snaps has won nine of 11 this year, earning $74,500.

Hall picked up his second of three Buckeye Stallion Series wins in the second division as Velocity Chaps fought off Mach Out Knockout down the stretch to win by a head in 1:52, a new lifetime mark.  Brian Brown trains the Well Said colt, who picked up his first win of the season and pushed his lifetime earnings to $103,089.

Hall made it three in a row in the Buckeye Stallion Series in the third division as he piloted Art Of Revenge to his fourth win in nine starts for trainer Mark Winters Jr.  The son of Art Official hung on at the wire to win by three-quarters of a length in 1:51.4.  Art Official raised his earnings to $38,200 this year.

Willydoitagain and Ronnie Wrenn Jr. made it look easy winning for the first time this year in a lifetime mark of 1:52.1.  The Domethatagain gelding went three-wide to grab the lead at the quarter pole and went on to win by two lengths.  It was the first win of the year for the Dan O’Mara trainee, who has now earned $22,349 this year.

Despite being parked to the half in :55.4, Tootie hung on gamely to win the $8,000 GLADA Trot on the Sunday undercard.

With Eddie Miller at the controls, the five-year-old Uncle Peter mare rebuffed any and all challenges and went on to score a head win over Heidis Heart in 1:55.4.

A speed duel ensued after the start when Daniel Jones and The Next Triumph locked horns with Tootie and they sped by the quarter in :27.3, and they were still heads apart by the half in :55.4.

When they straightened up the backside Tootie had gained command and she braced for a late challenge from  Heidis Heart. In the lane, the aforementioned raced side by side to the wire. But Tootie was not to be denied and she hung on for a head triumph in 1:55.4. The Next Triumph garnered the show dough for Christina Johnson.