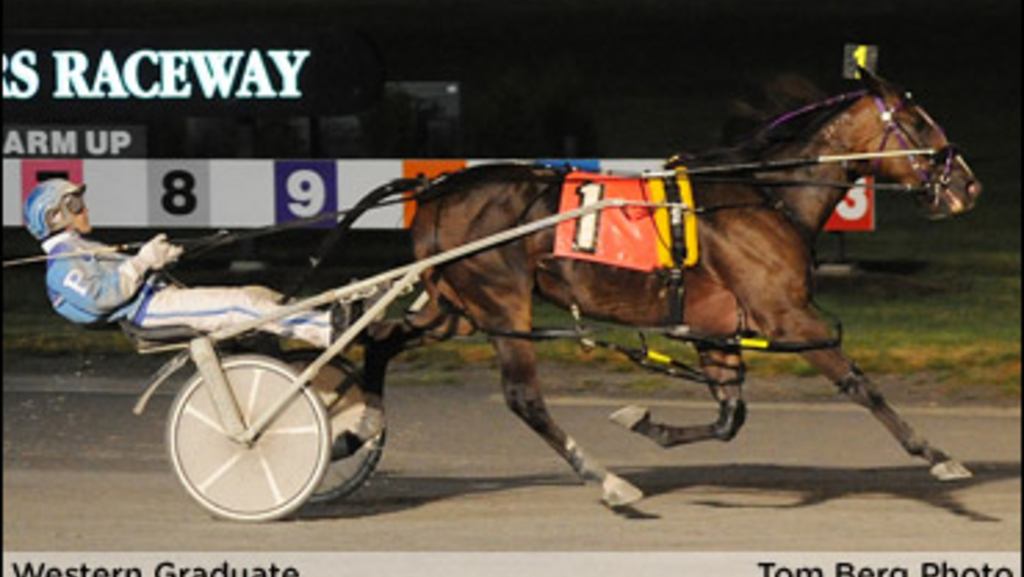 . The mile also lowered Ladyfield's World Record for aged pacing mares on a half-mile track by one-fifth of a second.

The track, after a mid-card rainstorm, was downgraded to "sloppy" for the final eight races.

Leaving from the pylons in the $31,000, 13th race pace, Western Graduate gave nothing else a chance. She zipped through fractions of :27.1, 55.1 and 1:23.1, taking a four-length lead into the lane. She then shamelessly piled on, widening to 9-3/4 lengths at the wire. Autumn Magic (Jason Bartlett) was the bridesmaid, though few were convinced she was actually at the wedding.

Yonkers' fastest mile of the season is 1:51.2, taken a Giddy Up Lucky last Saturday night.

The previous track record for aged pacing mares was 1:52.3, held by a six-pack. The Raceway's former fastest female was Ginger And Fred, with a 1:52 effort in May's final of the Blue Chip Matchmaker Series.

After a weather delay, "Hannah" put on her best rain garb and went the distance in the co-featured $42,500 Filly and Mare Open Handicap Pace.

Leaving from post position No. 5, she worked around Cheyenne Trish (Brent Holland) and led though intervals of :28, :57.3, 1:25.2 and a season's-best 1:53.2. Little Mermaid N (Pantaleano) moved first-up, with 11-10 favourite Shacked Up (Jason Bartlett)--who left for a seat--in behind. However, Little Mermaid N could never get close to the leader.

"Hannah" had a 2-1/2-length lead on her sisters turning for home, before winning by a comfy length-and-a-half.

For Hannah Isabel, a dive-year-old daughter of Bettors Delight trained by Marthe Drolet for co-owners Marilyn and Heiman Gross, she returned $8.50 (second choice) for her fifth win in 23 seasonal starts. The exacta paid $27, with the triple returning $97.

However, swift fractions of :27.4, :57.1 and 1:26.1 had made the leaders vulnerable. Y F Little Guy--angling out after slipping in between rivals down the backside only to find no room at the inn--moved from sixth entering the lane.

He went on to defeat Hurrikanebiggeorge by a length in 1:55.4, with Summertime Yankee (Matt Kakaley) completing the ticket, while Lady In The Wind (Cat Manzi) and Pembroke Prayer (Holland) rounded out the payees.

For Y F Little Guy, a seven-year-old Shilling gelding trained by Lou Pena for KDM Stables, he returned $52 (seventh choice) for his eighth win in 24 seasonal starts. The exacta paid $283, with the triple returning $2,264.