According to a report, a company based in Southern Australia has developed a test which can detect the presence of cobra venom in race horses 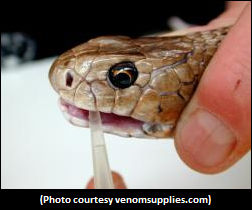 An article by the Barossa & Light Herald states that Venom Supplies of Tanunda, South Australia has developed a test that can detect the presence of the venom. The administration of cobra venom -- which is illegal and had been virtually impossible to detect -- has been used in the past to dull pain in race horses.

“We’ve developed a testing kit using cobra venom which can test a horse and detect the presence of snake venom in the system,” Peter Mirtschin, managing director of Venom Supplies, was quoted as saying.

“We’ve developed a tool which could help to stamp this practice out,” he said.

Click here to the read the Barossa & Light Herald article in its entirety.

(With files from the Barossa & Light Herald)

So if the rulemakers of

So if the rulemakers of Ontario racing are true to form, it'll be a minimum of 9 months before we actually get testing in Ontario, at which time there will be a notice to the industry stating that testing will begin, with the obligatory notice period of, say, 3 months to give the users time to either find something else to use or to turn over the horses that they are using it on.

New tests for drugs like cobra venom should be implemented immediately without any notice. Otherwise, there is little disincentive to use them. Partcipants who test positive can challenge the accuracy of the test afterwards, but should be allowed to race until the reliability of the test is confirmed.

Hmmmmmmmmmmmmmmm. I wonder why there is such a negative perception about horse racing by the public? Who in their right mind would all of a sudden want to start wagering on horse racing for their first time after reading this? Well at least we here in Ontario are on top of the whipping issue. Sighh.