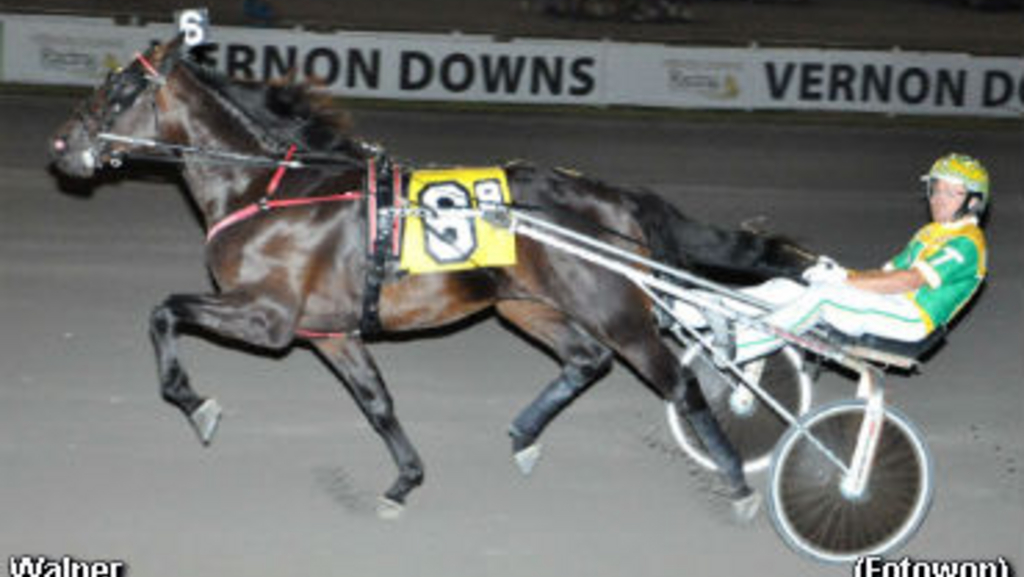 Following a pair of victorious qualifiers at the Meadowlands, Kenneth Jacobs's Walner made his pari-mutuel debut a winning one, vaulting clear off a second-over trip in his $38,000 New York Sire Stakes event for two-year-old trotting colts and geldings on Thursday evening at Vernon Downs.

Tim Tetrick floated forward with the son of Chapter Seven-Random Destiny from the outset, but was parked through the initial stages at Meetmeinthemiddle (Jeff Gregory) worked clear from Post 9 in a :28.4 first quarter before ultimately yielding to both Top Flight Angel (John Cummings, Jr.) and Money Macintosh (Andy Miller). Meetmeinthemiddle re-emerged to push the pace after a :59 half mile, and Walner latched onto second-over cover through the far turn. While Money Macintosh dug in to stave off Meetmeinthemiddle, Walner got the jump on them both, vaulting off dueling leaders in upper stretch and powering clear by 4-1/4 lengths to a sparkling 1:55.4 victory for trainer Linda Toscano.

Two other New York Sire Stakes divisions were part of the 12-race card at the Miracle Mile, with Stick With Me Kid ($16.00) and Such An Angel ($6.00) both proving victorious via extended first-over bids.

Stick With Me Kid made his move on the far turn, wearing down Optimist Blue Chip (Jim Morrill, Jr.) and subsequently holding off late charges from the second-over Annapolis Hall (Ray Schnittker) and odds-on favourite Devious Man (Andy Miller), who shook free from the pocket to give chase. Chris Lems drove Stick With Me Kid, a son of Deweycheatumnhowe and Chelsea Hall, to a 1:56.2 triumph for trainer George Ducharme.

Such An Angel used similar tactics in his 1:56.1 victory, but commenced his bid a fair bit earlier to overcome a mid-pack dispatch. John Campbell started to progress with the son of Credit Winner-Michelles Angel just before the completion of a :58.2 half mile, and the Paul Kelley trainee maintained steady progress all the way to a mid-stretch lead over favoured pacesetter Barn Winner (Jeff Gregory). Such an Angel dug in stoutly to hold off a late bid from Patton (Lems), who slip-streamed the eventual winner off the far turn.

Racing returns to Vernon Downs on Friday evening, with post time at 6:45 p.m.