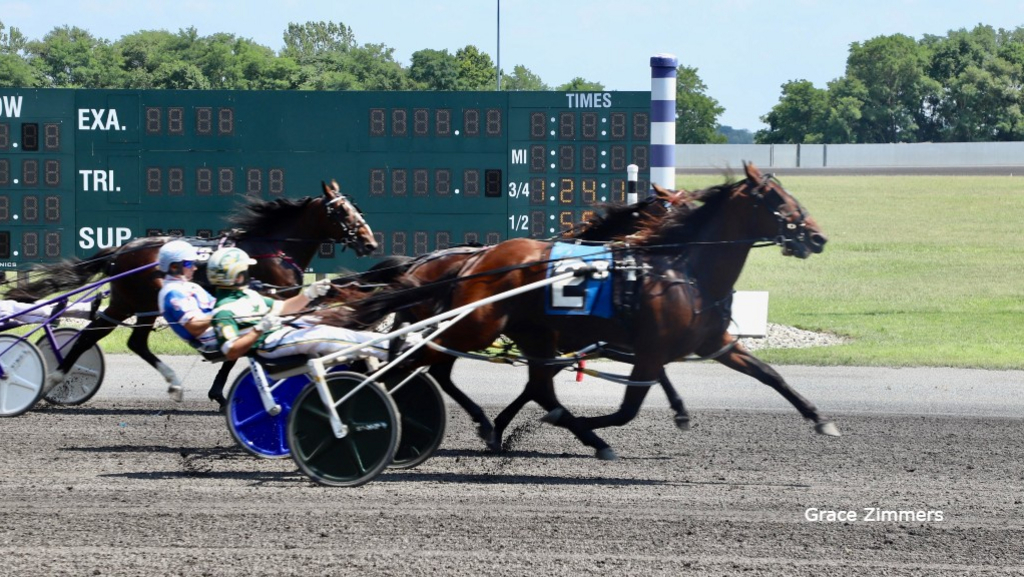 Ervin Hanover is now a double Pennsylvania Sire Stakes winner in his young career after capturing his $81,110 division of the second prelim for two-year-old pacing males Wednesday afternoon (July 20) at Harrah’s Philadelphia.

Annapolis Hanover, meanwhile, won his second straight stakes start in finishing first in the other division.

The Captaintreacherous – Eloquent Grace colt Ervin Hanover got to sit third behind Fulton, who set fractions of :27.1 and :56, and pocketed favourite Bugaboo Lou, who beat both of these colts in 1:51.3 in a Pocono Pennsylvania All-Stars race last time out.

Yannick Gingras tipped Ervin Hanover out late in the backstretch to challenge the pacesetter before and after the 1:24.1 three-quarters, and the finish came down to these two after Bugaboo Hanover, with a clear inner lane after the two-hole journey, failed to fire.

Ervin Hanover managed to wear down Fulton by a neck in 1:52.1, a new lifetime mark, with Bugaboo Hanover a further 1-¼ lengths back in third.

Annapolis Hanover (Stay Hungry – All Night Long), who was third to Fulton and Bugaboo Lou in his first PaSS leg, held at The Meadows, and who won a Pocono All-Stars event in 1:51.3, needed 1:52.3 to notch the victory for owner/trainer Mitchell York, a retired Pennsylvania state trooper.

Annapolis Hanover, the favourite, sat just behind second choice Lousain Bolt in fractions of :27.4, :56.4, and 1:24.4, then showed stretch grittiness to post his fourth win in six starts, beating out first-over Stay Grounded by a neck, with first leg PaSS winner Ken Hanover another three parts of a length behind in third, and Lousain Hanover fading to fourth.

Captaintreacherous dominated the siring stats in the six $20,000 Stallion Series events, with “The Captain” the father of three winners; Sweet Lou had two successes, and Stay Hungry one.

Two of the Tetrick wins were for trainer Jim King Jr.: the Sweet Lou – Zane Hanover colt Lyons Stealth, now a double Stallion Series winner and the fastest divisional winner on Wednesday, 1:53 (a new mark) for Threelyonsracing; and the Captaintreacherous – Dark Secret gelding Secret Captain, who dropped from the Sire Stakes and broke his maiden in 1:54 for owner Jo Ann Looney-King.

Tetrick’s other StS success came with the Stay Hungry – Dear Valley Miss gelding Dempsey Hanover, coming off an All-Stars second to break his maiden in 1:54 for trainer Todd Luther and Black Magic Racing.

Miller, who won a Sire Stakes with a Stay Hungry, had two sons of Captaintreacherous win for him in the Stallion Series to match Tetrick with three stakes successes. The two StS winners for “The Captain” and Miller were Quixote, a gelding out of the dam Love Canal, who won his initial purse start in 1:54.3 for trainer Nifty Norman, co-owner with Let It Ride Cooper Stables, Bottom Line Racing LLC and Howard Taylor; and Ship Ship Hooray, now a double StS winner in addition to an All-Stars triumph in his brief undefeated three-race career, the colt out of Scandalous Hanover taking a new mark of 1:53.3 for trainer Chris Ryder and owners Ryder Henderson Mondillo, Ken Jacobs, and Barry Spak.

Two-year-old trotting males occupy the Thursday spotlight at Harrah’s Philadelphia, with two $75,816 divisions of that group’s second prelim round of their Sire Stakes action, one of which is a head-to-head matchup of the first leg winners Crantini and Kenobi. Program pages are available on the PHHA website.