O’Donnell, Campbell To Bow Out Together 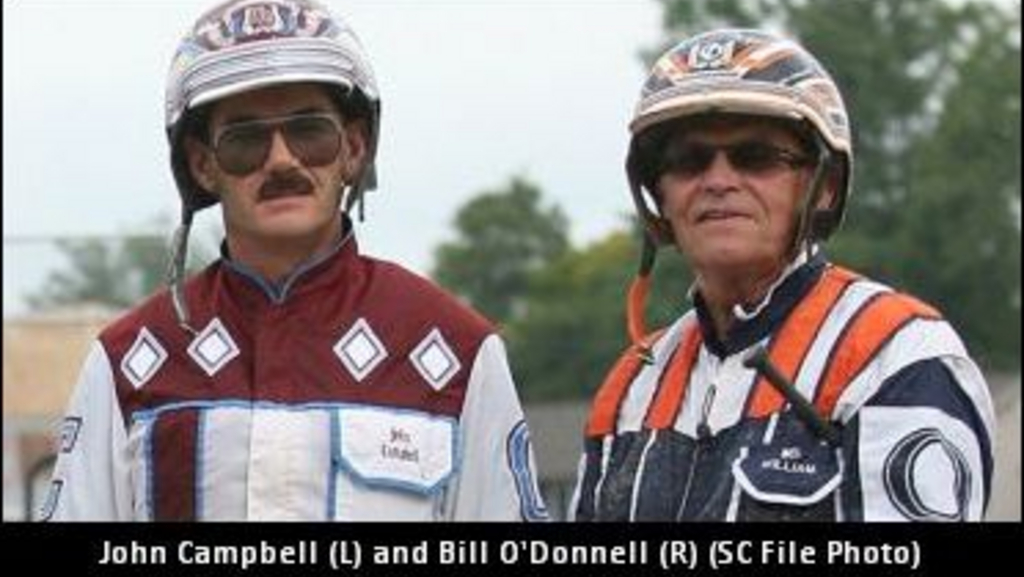 They once dominated harness racing like Larry Bird and Magic Johnson did basketball and Wayne Gretzky and Mario Lemieux ruled hockey.

Now Hall of Famers Bill O’Donnell and John Campbell will both hang up their colours for good after a final drive against each other on July 30 in the $15,000 Legends Day Trot at Clinton Raceway.

O’Donnell said it was an idea first hatched in Las Vegas in February during the Dan Patch Awards honouring the best in the sport in the United States from the previous year.

“We were down in Vegas for the Dan Patch. John and I and Dave Miller were standing there and John said, ‘Dave’s coming to Legends Day’ and I said, ‘Good, he can take my place.’ I don’t want to (drive) anymore…’ So John said, ‘Let’s do it together, our last drives,’” O’Donnell said.

Considering O’Donnell has only had a handful of drives in the last five years — most of those for fan events — he said he isn’t bothered by the fact Campbell, who is still driving regularly, is getting most of the attention for making his last drive at Clinton. 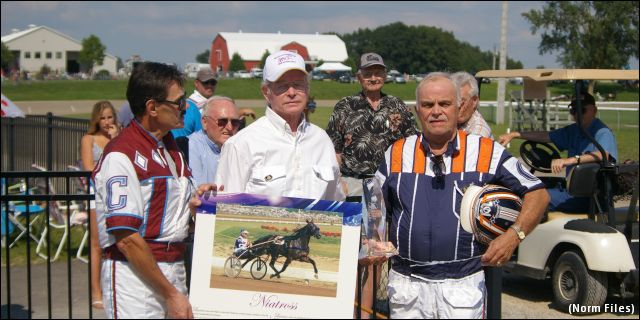 “I don’t mind it. I made $98 million on (Campbell’s) coattails,” O’Donnell said, laughing, adding that he’s been trying to officially call it quits for a few years and came close in 2013 after winning the $10,000 Mr. and Mrs. Elbridge Gerry Memorial Trot for Hall of Fame drivers at the Goshen, NY Historic Track that is located behind the Harness Racing Museum & Hall of Fame.

“After I won there that one year I said, ‘That’s it, I’m all done,’ but then they call because they have trouble getting eight guys (for the race). (Museum trustee) Ebby Gerry has called and it’s hard to say no to him, but I’ll break it to him this year (at Goshen) that this is it,” O’Donnell said.

In the 1980s, when the sport was flourishing at the Meadowlands Racetrack in New Jersey and the concept of hired-gun catch-drivers was in its infancy, O’Donnell and Campbell battled at the top of the sport like few drivers had before them and few have since. It was during that era that O’Donnell earned the nickname ‘The Magic Man’ for his wizardry in the race bike.

“Billy at his best was better than any driver I have ever seen,” Campbell said in 2001, the year Legends Day debuted. Legends Day, which this year is raising money for the Clinton Public Hospital Foundation, has been held every two years since and will celebrate its ninth edition this year. O’Donnell has never missed it.

“It’s just refreshing to see everyone is there for harness racing. These are fans,” O’Donnell said of Legends Day. “It’s a great day. You get to see people you haven’t seen for a long time.” 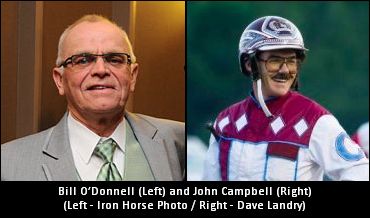 Combined, the eight legends have earned over $1.15 billion and won nearly 69,000 races.

Fellow legends Bud Fritz and 93-year-old Keith Waples — both of whom are retired from driving — will also be on hand for an autograph session.

O’Donnell said it’s nice the legends get along so well off the track.

“We’ve always been comrades. The racing was competitive on the track, but we all get along, pretty much, in that age group,” O’Donnell said.

He was born in Springhill, NS, a mining town of some 5,000 that is also the birthplace of Canada’s ‘Songbird,’ Anne Murray. 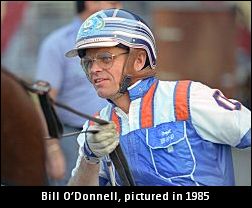 O’Donnell’s father, Henry — better known as ‘Henny’ — was a coal miner and a part-time horseman. In 1958, when Bill was 10, the Springhill Mine Disaster claimed the life of 75 men and led to the closure of the mine. That forced Henny to transfer to a mine in Cape Breton. Though the family moved, they still stayed in harness racing game.

Bill was exposed to the horses by his father and his uncle, Art Porter, from whom Bill took his blue, orange and white colours.

In the summer of 1965, when he was 17, Bill moved to Toronto and worked as a groom for Ron Feagan. He went home to Nova Scotia for the school year before returning to Toronto in the summer of 1966 to work for Bill Wellwood. In 1967, O’Donnell went back to Nova Scotia, worked there a few years and then headed for New England as an assistant trainer for New Brunswick native and former Legends Day honouree Jim Doherty, who passed away in 2015.

Bill stayed in New England for seven or eight years before poor purses forced him to pack up and move to Saratoga in New York. Only a few years passed before Bill moved to the Meadowlands in 1980. He stayed for two decades.

Aug. 16, 1984, still stands as Bill’s single greatest day in the business. That morning he set a world record driving trotting filly Fancy Crown at Springfield, IL. Then Bill hopped on a plane back to Jersey where he won the Woodrow Wilson with Nihilator for a purse of over $2.16 million, to this day still the richest harness purse in history. To top it off, he also won three of the four sizable Wilson consolation events. 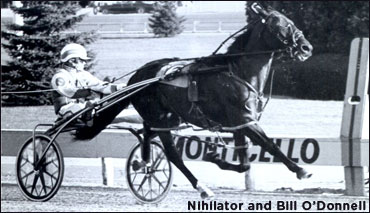 The win with Nihilator is widely considered the key moment harness racing changed from a sport of trainer/drivers to one in which trainers hired catch-drivers better skilled at getting the most out of horses. Legendary horseman Billy Haughton took himself off Nihilator — arguably his greatest horse — because he thought Bill O’Donnell would have more success.

That same year, Bill set a record for driver earnings of $9,059,184. The next year, Bill became the sport’s first $10 million man while driving both Nihilator and three-year-old champion colt trotter Prakas to single-season money-winning records. Prakas won The Hambletonian. Nihilator was the U.S. Horse of the Year. The brilliant son of Niatross won 23 of 25 starts, capturing every major stake offered and setting a then world record of 1:49.3 score at The Meadowlands.

Bill earned the reputation of excelling with trotters, even though he drove the fastest pacer ever – Cambest – in a 1:46.1 time trial in 1993 that stood for 23 years as the sport’s fastest mile until broken by Always B Miki in 2016. 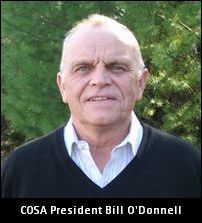 Bill said fans at Clinton Raceway often ask him about the horses he’s driven and Staying Together, owned by Robert Hamather of nearby Exeter, Ont. comes up more than most.

Today, Bill lives in Guelph, Ont. and is the president of the Central Ontario Standardbred Association that represents the horsepeople racing on the Woodbine Entertainment Group (WEG) circuit.

He said he is honoured to hang up his colours at Clinton and be there when Campbell does the same.

“I think it will be a big deal,” Bill said. “That’s where John started. That’s his area.”

In reply to Thanks John, I wholeheartedly by fantom

This list could go on forever. It was a great Drivers Colony but one of my all time favourites was Ray Remmen - not a better Human being and also a great driver.
Sonny

Thanks John, I wholeheartedly

Thanks John, I wholeheartedly agree. And Ronald you are correct. I knew I missed someone. Jackie Mo was definitely part of that stellar group.

In reply to I used to love watching and by fantom

I miss those days too so

I miss those days too so much.
Every Saturday night at the Big M was special. You looked up and down the drivers list of who's who.
That's why I love the big nights because you can still get all the best drivers together.
well said Joe...

What comes to my mind is that

What comes to my mind is that there is one missing from this era, Jackie Moe as he was called (Jack Moiseyev) who drove a lot of horses for trainer Angelo Canci, they all were great drivers. Good luck to John and the Magic Man on their retirement AND GOOD LUCK TO ALL THE DRIVERS BE SAFE.

Oops forgot to mention Howard Parker. I'm sure I probably missed someone else but that colony was loaded. Then came David Miller, Andy Miller, Gingras, Tetrick et al. Still a fine group of drivers. Not as deep as it used to be perhaps but still great.

I used to love watching and

I used to love watching and wagering on the Meadowlands races back in the day when the top drivers ever were there. On any given night you had John Campbell, Mike Lachance, Billy O'Donnell, Ron Pierce, Ron Waples, Cat Manzi, Bill Fahy, George Brennan, Dan Dube, Luc Ouelette, later to be joined by Brian Sears. What a drivers colony that was. The only choice you had to make was the horse because no matter who it was driving him he'd be a top driver.