Darlins Delight Has Designs On Distaff 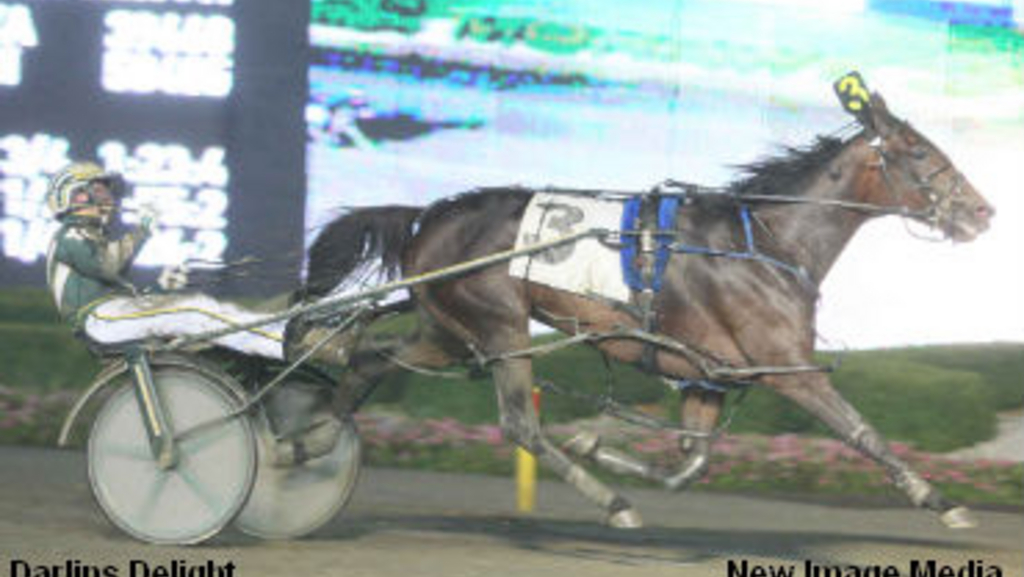 When Aretha Franklin sang about R-E-S-P-E-C-T, she probably didn’t have pacing mares in mind, but the field for the $353,710 Classic Distaff, part of a stellar stakes-rich card this Saturday night at Mohawk Racetrack, deserves every letter of that legendary word

Simply put, they are seven of racing’s most accomplished mature mares, each with stakes victories and accolades aplenty. They include former Ontario Sires Stakes golden girl, Michelles Power, her rival Hana Hanover (winner of nearly $900,000 and holder of a 1:49.2 speed mark), last year’s Breeders Crown champion, A And Gs Confusion, and Tug River Princess, who laid down a phenomenal seven-race win streak last year as a sophomore.

But when the daring divas duke it out on Mohawk’s 7/8 mile oval, all eyes will likely be on $1.4 million earner, Southwind Tempo, who set an electrifying world record time of 1:48.3 in April, at the Harrah’s Chester Casino 5/8 mile track, and on six-year-old Darlins Delight, for whom a win on Saturday would put her in rarefied territory, as one of harness racing’s handful of $3 million earners.

Darlins Delight, who last appeared at Mohawk last September to capture the Milton Stakes by five and a half lengths over Hana Hanover, is currently on a winning streak, having scored in her last three starts at the Meadowlands, Yonkers, and Harrah’s Chester. As always, trainer Jeff Stafford has tapped Yannick Gingras to be her pilot, and she’ll be leaving from post position #1 at 6-5 morning line odds.

Southwind Tempo, meanwhile, will be out in Post 6, with Jody Jamieson at the controls. Trainer Darren McCall sends out both Southwind Tempo and her stablemate, Tug River Princess, and says both mares have been training exceptionally well.

“They’re both great horses and they’ve been going really good – I don’t know if I could choose between them at this point,” he commented.

The Classic Distaff, which is carded as Race 6 (post time 9:15 p.m.) on the June 13 card, is only one of four Classic finals. In addition to two contests for the trotters, there is also the $353,710 Pacing Classic final, scheduled as Race 9 (post time 10:18 p.m.). It, too, has attracted some of racing’s most powerful mature speedsters, with the morning line handicappers giving the nod to last week’s divisional winner, Winbak Speed, at odds of 2-1.

Though Winbak Speed a six-year-old son of Village Jove, has delivered four consecutive sub-1:50 performances in his last four starts, he’ll have some serious company on Saturday night. Local favourite, Bigtime Ball, had been riding a four-race win streak this spring until Winbak Speed stuck his nose in front last Saturday, and Bettor Sweet, one of two entries from conditioner Joe Poliseno (Western Shore is the other), set a new lifetime clocking of 1:47.2 in a Graduate elimination at the Meadowlands barely a month ago.

It’s shaping up to be a quadruple set of Classic duels, on a night which also features the final big prep race for the Pepsi North America Cup, the Burlington Stakes. Mohawk is definitely the place to be on Saturday night!