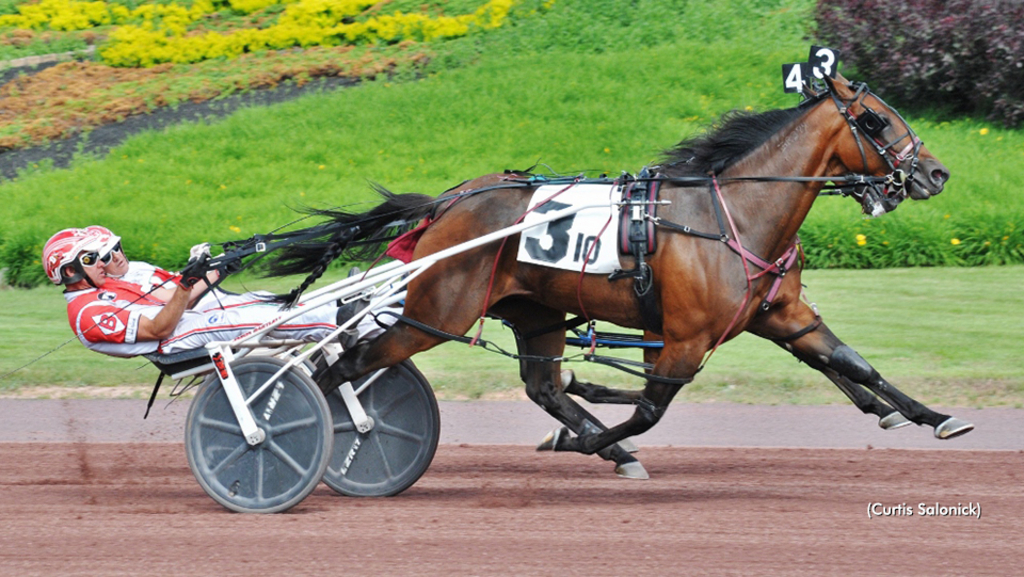 Dragon Said and Alluneedisfaith N were the 1-2 choices of the crowd in the $17,500 featured pace at The Downs at Mohegan Sun on Saturday (June 11), and they fulfilled the bettors’ expectations precisely, but not until a hard stretch duel saw Dragon Said claim the victory in 1:50.1.

Dragon Said had post 3 and Alluneedisfaith N had post 4, and Jason Bartlett sent Dragon Said away quickly to take some sting out of his main rival, who was frontward-bound. Mission accomplished by the :26.4 quarter, though the George Napolitano Jr.-guided leader got relatively soft midfractions of :55.2 and 1:23.1.

Bartlett tipped Dragon Said out at headstretch to try to gun down Alluneedisfaith N, and there were two blurs of red and white motion behind the two contenders before Dragon Said gradually made his way past his game rival to post a neck victory, stepping his own back half in :54.3. The victorious Well Said gelding has now won all three of his starts since coming to Pennsylvania, one at Philly then two here, for trainer Jennifer Bongiorno and owner Robert Devine, and he has raised his lifetime bankroll to $307,637.

Jason Bartlett and Jennifer Bongiorno combined for three winners on the Saturday card; at that total they were joined by George Napolitano Jr.

In the $17,500 trotting feature, the Explosive Matter gelding Rich And Miserable made it two straight in this class at Pocono while boosting his earnings to $$630,339 after a 1:54.1 victory. Rich And Miserable was out behind the cover of Marion Gondolier to the :27.2 quarter, where that one took over from Lady’s Image, then pressed on to the lead at the three-eighths and got a moderate middle pace of :56.3 and 1:25.2. Marion Gondolier tried up the Pocono Pike and Lady’s Image made a late charge, but Rich And Miserable was not threatened in winning for driver Tyler Buter, trainer Todd Buter, and the partnership of Buter Farm Inc., Lynette Buter, and William and Carol Fuhs.

Pennsylvania Sire Stakes and Stallion Series action for three-year-old trotting colts will highlight the Sunday card at Pocono. First-round winners That Ole Bar Stool and Dandy are in separate $66,554 divisions of the Sire Stakes; the former, a winner in an All-Stars contest when last here, may have a slightly harder task in that he drew in with fellow All-Star winners Ducasse and Kosher Mahoney. First post for Sunday’s card is 5 p.m.; Program pages are available at the PHHA website.