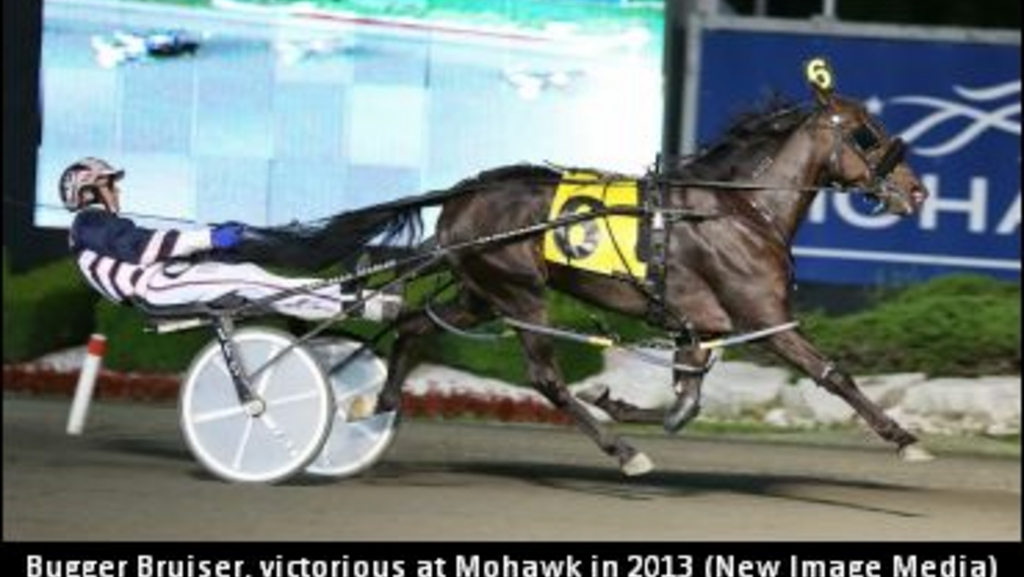 Bugger Bruiser joined stars and a handful of other top three-year-olds eligible to the $1-million Pepsi North America Cup during the Friday morning qualifying session at Mohawk Racetrack in Campbellville, Ont.

Bugger Bruiser, who has been pegged at odds of 16-1 in Trot Magazine’s 2014 NA Cup Spring Book, took part in the second dash on the nine-race docket and was a well-measured winner for driver Anthony MacDonald and trainer Carmen Auciello.

Bugger Bruiser, a gelded son of Ontario sire Believeinbruiser, started from Post 1 and was third by the time the opening quarter flashed to life in :29.1. The career winner of five of his 11 pari-mutuel races was on the move in the second quarter and was first to the half-mile marker in :57.1. The career winner of $226,730 in purses blew past the three-quarters of a mile marker in 1:24.4 and led the field at the head of the lane. MacDonald and Bugger Bruiser utilized a 28-second final quarter to record a half-length victory in 1:52.4.

Fellow NA Cup eligible Major Trick (70-1 in the Spring Book) had cut the quarter in Race 2 and took a pocket ride into the stretch for driver Jody Jamieson and trainer David Menary. The son of Art Major recorded a final quarter of :27.4 and finished second behind Bugger Bruiser. Boomboom Ballykeel (13-1 in the Spring Book) raced in fourth throughout the mile, finished fourth, and was individually timed in 1:54.1 for driver Sylvain Filion and trainer Richard Moreau.

2013 O’Brien Award finalist Miss Aultsville made her three-year-old debut in Race 3 for driver Jack Moiseyev and trainer John Kopas. After having started from Post 2, the daughter of Kadabra went on to be first at every call and recorded a three-quarters of one length victory in 1:58.3.

Race 4 featured a pair of pacers making their four-year-old charted debuts. The John Williamson-trained and James MacDonald-driven Urbanite Hanover got his 2014 campaign off on the right hoof, as the bay son of Western Ideal went gate to wire from Post 8 and recorded a three and a quarter-length victory in 1:52.4. Fool Me Once, who was driven by Chris Christoforou for trainer Mark Austin, sat off the tempo early, but came calling in the back half of the mile. The son of Art Major finished second and was individually timed in 1:53.2.

NA Cup eligibles were back on track in Race 7. The Casie Coleman-trained and Jonathan Drury-driven For A Bettor Time (60-1 in the Spring Book) started from Post 6 and went wire to wire. The gelded son of Bettors Delight won by one and three-quarter lengths in 1:55.1. Well Written (125-1 in the Spring Book) was beaten by multiple lengths and finished fifth.

2013 O’Brien Award winner Flanagan Memory continued to prep for his four-year-old campaign by trotting to a five and a quarter-length victory in 1:54.3 for driver Chris Christoforou and trainer Rene Dion. The dash was also the first charted line of the season for six-year-old Kadabra mare China Pearls, who trotted in 1:55.3 and finished second.