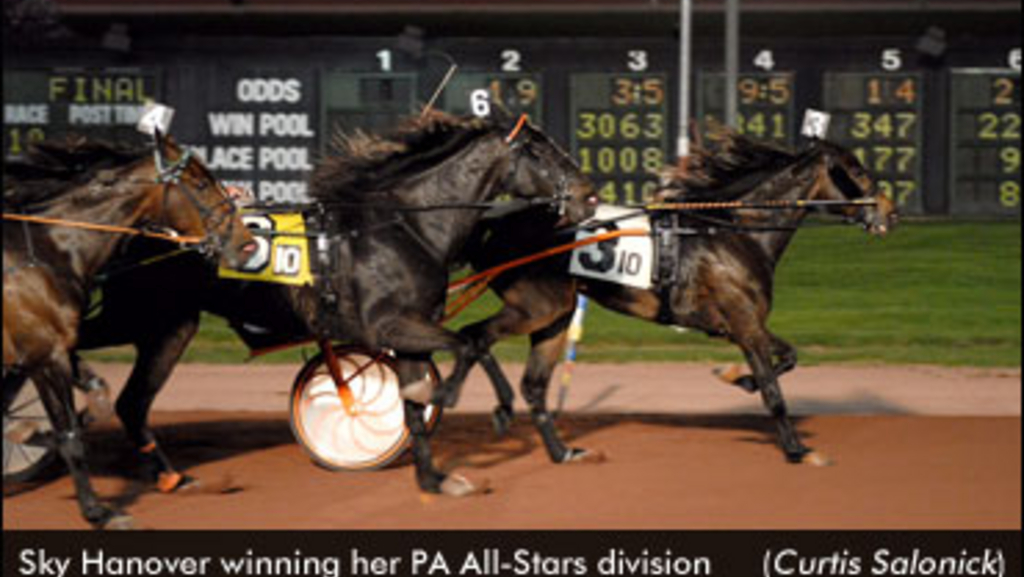 The chalk was perfect Sunday night at The Downs at Mohegan Sun Pocono in three divisions of a $96,000 Pennsylvania All-Stars event for three-year-old trotting fillies.

First up was Focus On Me, a daughter of SJs Caviar who is now perfect in two seasonal starts after rallying from the pocket into a :28.1 last quarter to catch pacesetting Fly Angel Fly by a neck and take a race mark of 1:56.4. Dan Rawlings handled the driving for trainer Rick Beinhauer, of Sierra Kosmos fame (he is the first and antepenultimate listing, among others, in the 347 “prior owners” of the horse listed by the USTA). Beinhauer and his wife Regina both own and bred the promising filly.

Livininthefastlane, 2-3 in the two weeks of the Breeders Crown last year, surely lived up to her name in her seasonal debut, making an early move to the lead and storming home in :27.3 to post a 1:54 clocking that missed her two-year-old record by a tick. The daughter of Donato Hanover races for Team Orange Crush, trainer Julie Miller and driver/husband Andy, and the well-known Canadian ownership triumvirate of Marvin Katz, Al Libfeld, and Sam Goldband.

The “Crushers” were right back in Pocono’s Victory Lane with another daughter of Donato Hanover, as Sky Hanover, now undefeated in four seasonal outings, had to survive the first-over grind in withstanding the horse on her back, Big Barb, by a half-length in 1:56.1. Sky Hanover is owned by the Andy Miller Stable Inc., Little E LLC, Banyan Farms and Westminster Road LLC.

It’s back on Tuesday! The High Five! $5,000 carryover pool, race six on the card. Every race night.