Somewhere In L A Upsets In The Diplomat 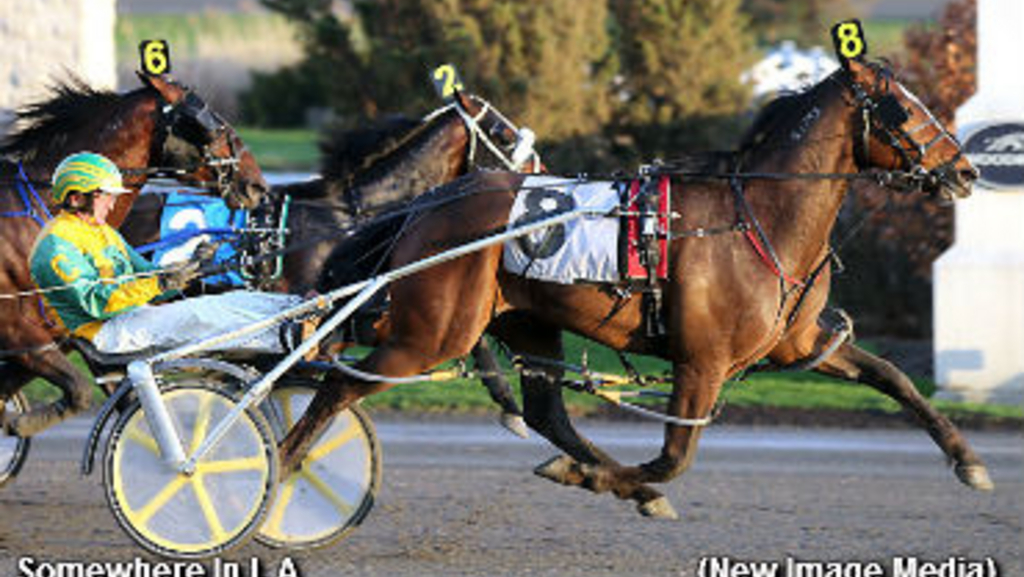 All eyes were on the undefeated National Debt in Saturday’s second leg of The Diplomat Series at Woodbine Racetrack, but Somewhere In L A rained on that foe’s parade in his quest for an eighth straight score.

In rein to Hall of Famer Steve Condren and trained by Hall of Famer Bob McIntosh, Somewhere In L A powered home in :28.3 to post the 30-1 upset.

Sylvain Filion wasted no time hustling the heavily favoured National Debt to the lead, and the Bob Young trainee sliced out splits of :28, :56.3 and 1:25. The 1-9 favourite, however, couldn’t fend off the late-rushing Somewhere In L A who kicked off cover and exploded home to win by a length in 1:54.3. National Debt held on for second, with third prize going to Prince Clyde.

“My guess is that National Debt was off his game,” said driver Steve Condren. “That’s a pretty strong head wind out there tonight and he was on the lead. I didn’t angle off cover with my horse until late because of that and he responded. It’s just his second start back this season and he’s certainly going in the right direction.”

The three-year-old son of Somebeachsomewhere-West Of L A is a homebred owned by Robert McIntosh Stables Inc, C S X Stables and Al McIntosh Holdings Inc. It was the first win of the season – and the fourth lifetime tally – for the career winner of $85,892.

Later on the card, Thinking Out Loud extended his winning streak to two-in-a-row for trainer Bob McIntosh thanks to a 1:53.1 triumph in the $34,000 Preferred Pace.

Randy Waples hustled the five-year-old son of Ponder-Los Angeles to the early lead and had the field chasing them to the quarter pole in :29.1. In Commando shot to the front in the backstretch and led the group through the next two panels of :57.4 and 1:25, but he failed to last on the lead. Thinking Out Loud rallied off the rail in the lane and used a :27.4 kicker to prevail by a half-length margin over State Treasurer. In Commando faded to finish third.

Sent off as the 6-5 favourite, Thinking Out Loud won for the 13th time in his career. The homebred, who races for Robert McIntosh Stables Inc, C S X Stables and Al McIntosh Holdings Inc, has banked $1,438,211 to date.