Bringing Racing Back Into OLG

While the interview was taped just hours prior to Thursday's bombshell announcement that Paul Godfrey had been fired as the Chair of the Ontario Lottery and Gaming Corporation, the discussion between host Norm Borg and John Snobelen is just as relevant. In fact, the argument could be made that horse racing's chances to access different revenue streams within a re-integration plan with the OLG as outlined by the OMAFRA Panel and mandated by the Premier are now better than ever.

"We're delighted that over the last couple of months the Premier has shown the kind of support and really the depth of knowledge she's shown about the importance of live racing in Ontario," said Snobelen to Trot Radio's Norm Borg. "We recommended that the industry needed to be re-integrated with the gaming strategy. That just makes sense. There's a lot of things we can do together with OLG and the other gaming products in marketing, in distribution and all the ways most horsemen would know." 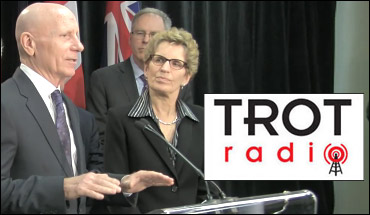 The distribution network, according to Snobelen, is one of key areas for racing. Given the amount of locations where lottery products are currently sold, the opportunity to expand racing to those outlets is tremendous.

"The opportunity for people to know about horse racing and to wager on horse racing in more locations across the province can only help us build interest in our sport and the amount of participation we have in people and gaming both on and off the track," stated Snobelen. "We're intrigued by the opportunity to take some of the more sophisticated wagers in the province and provide them with a better product. Over the course of the next month, we're going to be looking at all of those alternatives."

Both Borg and Snobelen agree that racing holds an edge over a straight number-picking lottery insomuch that people can cheer, back and support their selections.

"We've got the only gaming opportunity in the world that has a heart in it. For anyone who knows anything about horses and understands the grace of horse racing, it's all about that will to win and the heart of the horse, and there's nothing that can replace the excitement of that. So I think the more we can expose people to the best part of our sport, the better off we'll all be."

In October, the OMAFRA Panel called the current lottery landscape "crowded," so how does a racing product fit into that offering without simply being just another game?

"Gaming faces some rationalization in the overall marketplace." Snobelen said, reiterating that the Panel feels racing has the advantage of heart and competition plus what he referred to as "fatigue" from conventional gaming products.

"We really think the more we look at racing, the better the fit will be with the other gaming products in Ontario."

To listen to the full interview, including Snobelen's thoughts on a sports-racing betting product, historical racing, and the time frame for the initial report to be delivered to the Premier, click the play button below.

In reply to This is an opportunity to by realfreeenterpriser

I have been saying for a year

I have been saying for a year on these fourms that all the horsemen and track owners need to work with the government, rather than fight the government, but got told to take my ideas elsewhere, and either support the horseman or shut up. So now that you have no hope, it becomes a good idea?

The time has come for the horseman, and the track owners to start listening to the only voice that will matter in your near future..... the people pumping money thru the wickets. The best way to do this...... is not have a horseman or track owners leading the charge.

This is entertainment for those that will be wagering on your horses and providing the purse money that you race for, someone with a mind more focused on that, rather than tradition or this and that is needed

would horseman and track owners give that up

Great point Mark. I think you

Great point Mark. I think you have hit the nail right on the head.

With all due respect Borg and

With all due respect Borg and Snobelen. I often take employees and their families for weekend trips to the Belagio Casino in Las Vegas. They and hundreds of others wager and cheer for Football, Basketball, and Baseball games which have a "heart in it", or is the Human heart not worth as much in the Cheering game as the Horse is? I have taken them to Harness racing (my first love), and they much prefer the "Human heart" products. Sorry Ladies and Gentleman at the risk of being called repetitive, it is the well know problems stated by myself sand others with the racing Product that is the problem!

This is an opportunity to

This is an opportunity to "modernize" horseracing in the Province because the government needs to make this work. There are lots of gamblers out there who are willing to sit in front of a machine and pull the handle but aren't willing to pore over a program deciphering rafts of information in order to place a bet every 20 minutes or so. That's the crowd we need to target with new, easier forms of betting and whatever other adjustments are necessary to deliver a comparable "thrill" while still keeping, and hopefully expanding, the pool of traditional horse bettors.

In reply to Great intro Norm-very funny. by jack darling

Tim Hudak has been very

Tim Hudak has been very disappointing even though his party supports us. Andrea Horwath has been all talk and no action.
You do understand that they are the opposition party and third party leaders, and have all mentioned racing, while several of their caucuses and party MPP's have all spoken and fought for racing... And not one Liberal stood up to speak about racing's crisis?
And the motion to suspend the modernization and reinstate SARP (which never made it to the next step) was a joint effort by PC's...who had motion rights and gave them to NDP's to expedite hearing? (I think it was Monte McNaughton's motion day and he let Taras Narasyndic (sp) have the motion....
The leaders can only speak on so much in certain areas...
Don't fault the PC's or NDP's... They didn't pull the plug. And they've both been speaking about this weekly...
The Liberals did it. The liberals are trying to fix it... They are the ones in power at the moment.
Your statement about Hudak and Horwath could be the same as one of the 12-year old pages in the legislature..."you know, they were there every day and didn't save SARP" ... They don't have the power... Just like the suspending modernization motion.

I had raised a question years

I had raised a question years ago about being able to bet a race on the lottery terminals. This would put racing betting in everyones grasp in the province. I am sure there is some logistics to work out about how to do this, but this would be a good opportunity to modernize (horse racing)gaming!

Great intro Norm-very funny. Things are looking much better for us. I have been very impressed with Kathleen Wynne since she got into power.She has been saying and doing the right things so far. Lets hope she follows through to the extent we need. Hopefully she can repair most of the damage that Mcguinty,Duncan,Godfrey (and Mcmeeken,our agriculture minister who quietly watched it all happen)have done. Tim Hudak has been very disappointing even though his party supports us. Andrea Horwath has been all talk and no action. Mr Snobelen is saying the right things now too and appears to be supportive of what our industry needs. Most of the major decisions appear to be in his committees hands so I hope they get more input from industry leaders so things are put together right this time. We did have problems with some tracks and some track owners that can be corrected. Our future depends on the decisions that are made in the next couple of months so lets wish them the best and hope it is done right. Thanks again Norm for these interviews.

"Both Borg and Snobelen agree

"Both Borg and Snobelen agree that racing holds an edge over a straight number-picking lottery insomuch that people can cheer, back and support their selections."

Maybe the horseman and tracks can figure this out so the pools are respectable and racing pays its own way rather than relying on the slots like it does now.

Congratulations Ontario. This is perhaps the first substantially positive event we have heard. I hope the Premier who is quacking like a duck is really a duck!