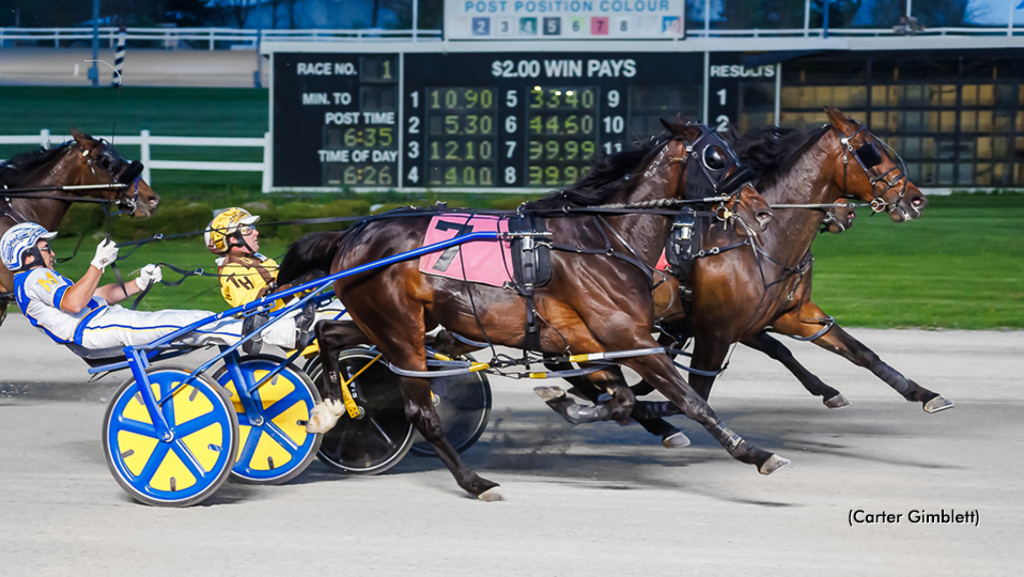 Desperate Man secured a stalking trip from the pylon post in the second of the three eliminations, sitting fourth to a :26.3 first quarter set by Virgo before 1-9 favourite Charlie May seized the front. On the point, Charlie May posted a :55 half and faced a first-over push from American Courage up the backside, catalyzing the pace to three-quarters in 1:22.2. Trevor Henry meanwhile had Desperate Man poised second over coming to the final turn and swooped the four-year-old Shadow Play gelding around his cover off the turn and surged gamely through the stretch to claim a head victory in 1:50.2. Linedrive Hanover rallied down the center of the course to just snag second from Charlie May.

Owned by trainer Kathy Cecchin along with John Cecchin and Nicole and Paul Davies, Desperate Man won his seventh race from 20 starts and has now earned $1,001,636. He paid $22.30 to win.

Bulldog Hanover blasted for the front in the last of the three elims and dug his heels to hold a 1:49.3 victory.

Driver Jody Jamieson jetted the Shadow Play stallion from post 6 to lead to a :27.1 first quarter and kept the pace hot while Powertrain applied first-over pressure to a :54.3 half. Powertrain began to retreat into the backstretch, but Bulldog Hanover opened three lengths on his rivals while clicking three-quarters in 1:21.3. Lous Pearlman pulled off the pegs to take aim at the leader coming for home and slowly made gains, but still came a half-length short of victory at the line. Dean B Hanover closed from last for third.

The 1:49.3 mile by Bulldog Hanover bests the previous track record for an aged pacing stallion of 1:50.4 set by All Bets Off in 2015. It also trumps the Canadian record of 1:50.3 first set by Sunfire Blue Chip in 2014 at Hippodrome 3R and matched by All Bets Off at 3R in 2015, Crombie A at Charlottetown Driving Park in 2015 and Evenin Of Pleasure at The Raceway at Western Fair District in 2016. Bulldog Hanover also came a fifth of a second off the all-age Canadian record for a pacing stallion on a half of 1:49.2 set by Somebeachsomewhere at Flamboro Downs in 2008 and two-fifths of a second off the all-time fastest mile on a Canadian half set by This Is The Plan at 3R in 2019.

Bulldog Hanover, winning his fifth race in a row, competes for owners Jack Darling Stables Ltd. and Brad Grant. Jack Darling trains the winner of 15 races from 22 starts and $943,561. He paid $4 to win.

Rockyroad Hanover won in the other Juravinski elimination as the 1-5 favourite. The Captaintreacherous stallion sat fourth while Century Heineken sped through a clip of :26.2, :54.4 and 1:22.4. Driver Dexter Dunn then launched the Tony Alagna pupil after the leader coming for home and collared the pacesetter by three-quarter lengths to win in 1:51. Armor Seelster also closed to finish third.

After the completion of the eliminations, Flamboro drew the field for the $273,500 Charles Juravinski Memorial Cup Final for Sunday, May 22. The field as they will align appears below: