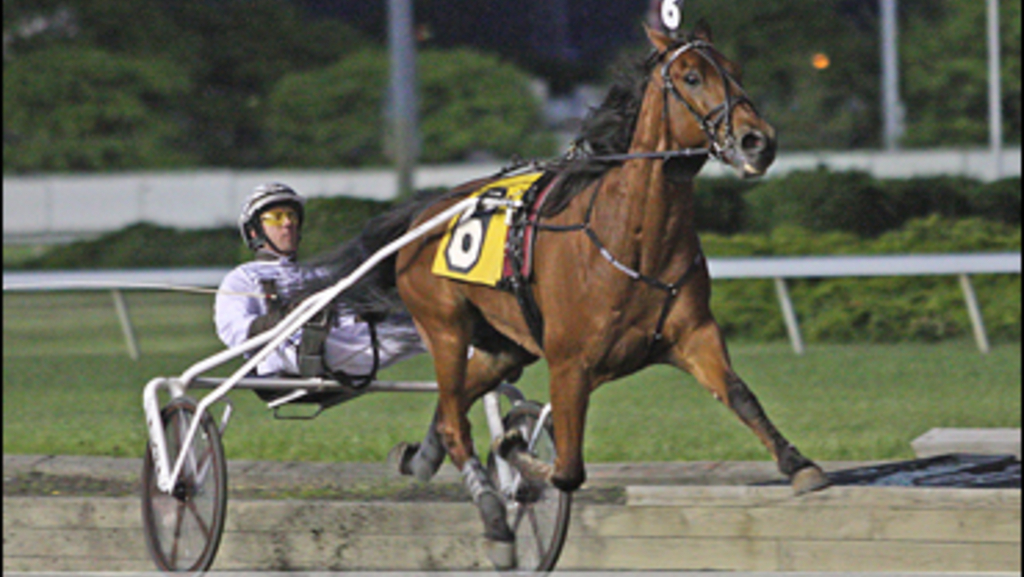 Arch Madness moved to the lead past the opening quarter and cruised home to a stakes record 1:51 victory in the $220,000 Arthur J. Cutler Memorial for trotters Saturday night at Meadowlands Racetrack

Arch Madness and driver Brian Sears blasted out from Post six and got the jump on Lucky Jim (Andy Miller) as they gunned to the lead after the :27 opening quarter set by Corleone Kosmos (John Campbell). Never challenged, Sears and Arch Madness breezed through middle fractions of :55.4 and 1:24.1, and drew off to a 4-1/2-length margin. Forced to come first over, Lucky Jim never entered contention and finished a distanced second. In Focus (Daniel Dube) held his ground to finish third. Arch Madness paid $6.80 to win the Cutler Memorial, raced in honour of the late New York City restaurateur whose legacy includes Carmine's, Virgil's Real BBQ, Artie's Delicatessen and Gabriela's.

"The post definitely played quite a part in my strategy," said winning driver Brian Sears. "It was nice to draw inside of Lucky Jim [who had Post 7]. I was looking for [Lucky Jim] and he wasn't right at me so I felt pretty good about that when I started trotting around the turn. He was on idle all the way down the lane. The horse is just really, really sharp. Last week I told Trond [trainer Smedshammer] he hasn't been that sharp since he won the Breeders Crown as a three-year-old."

Arch Madness notched his first win in five starts this season. Lifetime, the six-year-old gelding now sports a record of 18 victories from 54 starts and a $2,430,439 bankroll. Trond Smedshammer trains the son of Balanced Image for Marc Goldberg of Woodmere and Willow Pond of Hewlett, New York. 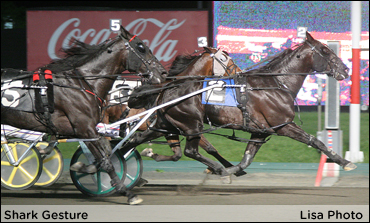 Shark Gesture fought off pressure from both sides to earn his second straight victory in the $200,000 Graduate Final.

Shark Gesture pressed the leader Won The West (Dave Miller) well before the half and was stretched out to make the top in a brisk :53.3. Lisagain (John Campbell) came to call as they circled the far turn and the two horses were just heads apart as they started their sprint down the lane. With Won The West surging up the pylons to his inside and Lisagain still at his throat, Shark Gesture gamely fought back in the final strides for a half-length victory in 1:48.4. Driven by George Brennan, Shark Gesture paid $3.40 to win the co-feature for older pacers.

"Going into the race, I figured I'd have to get down to the half in :53 if I was lucky enough to make the lead," Brennan said. "That was the whole idea about picking the rail [elim winners picked their starting posts in the final]. I wanted to get away as best as I could and then try to move him to the lead, and it worked out perfectly. Lisagain never quit and then Won The West was coming up the inside and 'Shark' just fought them both off. He's absolutely one of the toughest horses I've ever raced and he proved it again tonight."

A seven-year-old, New Jersey-sired son of Cams Card Shark, Shark Gesture lifted his earnings to $2,104,719 as he notched his second win in three starts this season. After embarking on a brief stud career in 2008, Shark Gesture was brought back to the racetrack in 2009 by trainers Larry and Ray Remmen. He went on to win seven of 29 races, including the Graduate and William R. Haughton Memorial finals, for seasonal earnings of $963,890. Shark Gesture is owned by Norman Smiley of Boca Raton, Florida, Gerald Smiley of Cote Saint-Luc, Quebec and TLP Stable of Kearny, New Jersey.

"I knew he'd keep fighting, there's no give up in him," said Meadowlands' all-time leading trainer Ray Remmen. "He's got lots of 'go' and lots of heart. He's by far the best horse I've ever trained."

The undercard featured the first leg of the New Jersey Sire Stakes for three-year-old colt pacers. For a full recap of the three NJSS divisions, click here.