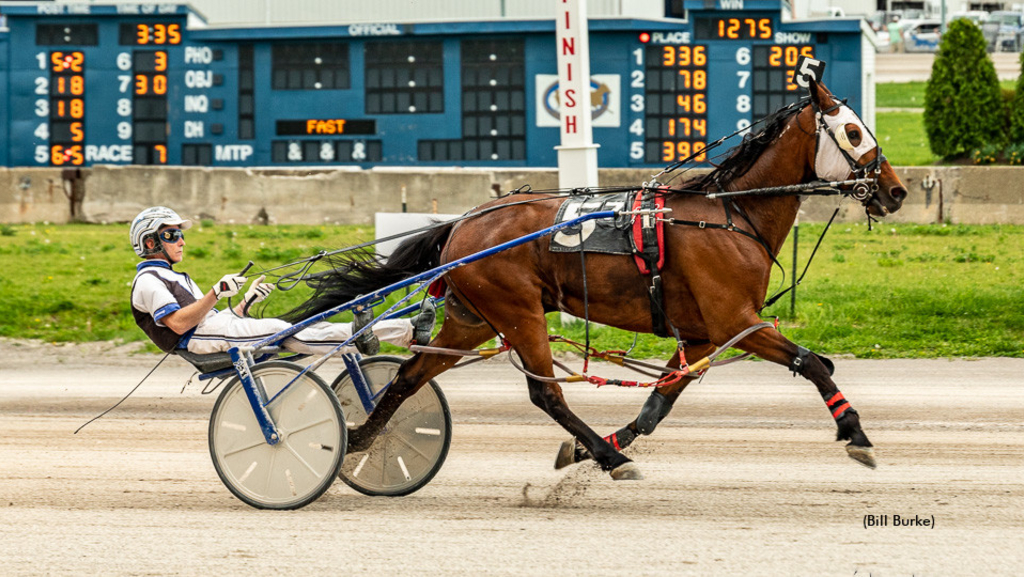 Driver Kevin Cummings and Stop Action pulled the old switcheroo on the field in Buffalo Raceway's featured $14,000 Open I-II Handicapped Pace on Saturday afternoon (May 14) and it resulted in an impressive victory.

Usually known for charging from off the pace, Stop Action and Cummings reverted to some new tactics, setting the tempo on the front end. It was certainly the right move as Stop Action ($4.60) won his second straight Open with a 5-3/4 length romp over My Money Honey (Kyle Cummings) in 1:54.1, a seasonal best and the quickest mile of the 2022 meet.

Probably stunning the other six entrants off the gate, Stop Action was put into immediate 'action' and easily controlled the top from the beginning. Posting splits of :29.2, :58.2 and 1:26.1, Stop Action waved goodbye to the field down the home stretch as the other participants scrambled for minor spoils. My Money Honey took that minor skirmish with Oreo Dream Xtreme (Shawn McDonough) collecting the show cheque.

Owned by Super Mile LLC and trained by Angelo Nappo, it was the sixth victory in 14 attempts on the year for the five-year-old gelded Stop Action (Somebeachsomewhere - The Show Returns). The win boosted his earnings to $39,931 and $116,975 in his career.

The $11,300 Trot was featured on the undercard. E Street ($18.40) made a big brush approaching the opening marker and made it home safely from there to defeat Le Millenaire by a neck in a seasonal best 1:58.2.

Le Millenaire was able to collect the lead from the pylons but E Street, who was sixth and last off the gate, cruised up to gain the advantage at the top of the stretch. From there, E Street was able to stave off a challenge from Le Millenaire in the passing lane to take the win. Bjanthony (Keith Kash Jr.) was third.

Co-owned by Margaret and Amy Butler and conditioned by Jim McNeight, it was the second victory in three starts on the season for the four-year-old E Street (Conway Hall - Highway Cash). The score took his bankroll to $10,250 in 2022 and $46,220 lifetime.

Catcha Lefty A was the one to catch as he posted fractions of :29.4, :59 and 1:27.3 but Weekend Atnannies ($10.20) got the perfect pocket trip. Turning for home, Weekend Atnannies slowly but surely nudged ahead and earned the winner's circle photo opportunity with the neck victory.

Owned by Jaclyn Giuliani and Ben Ortiz and trained by Shawn McDonough, it was the second triumph in 11 tries on the campaign for the seven-year-old Weekend Atnannies (Western Paradise - Locoste Gal). The win jumped his seasonal earnings to $23,991 and $166,341 lifetime.

Kevin Cummings and Morrill Jr. had three victories apiece in the sulky while McDonough tripled and Gerry Sarama doubled to highlight the training category.

Live harness racing will continue on Wednesday afternoon at 1:30 p.m. with a 10-race card on tap. The program features the $115,600 New York Sire Stakes event for three-year-old colt and gelding trotters. The race has attracted six entrants and will go off as the fifth race. There's also a $15,000 Excelsior A race for the sophomore sidewinders.