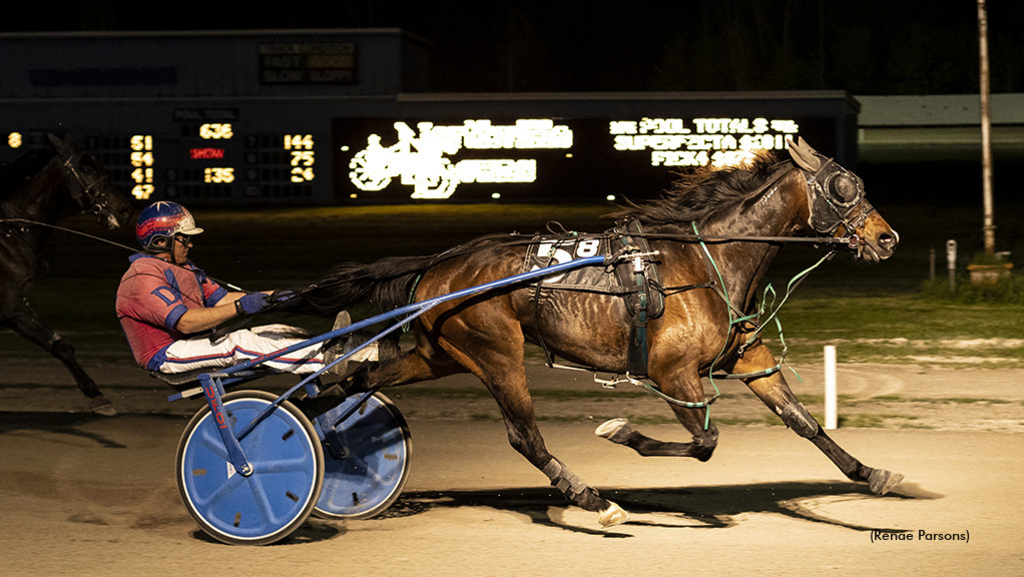 Omyheart and driver Skip DeMull overcame being parked the mile and some traffic trouble to take a trip to the winner's circle in Friday's $10,800 Open Trot at Northville Downs.

After early leaders I Get It (Bob Rowland) and Stoneborough (Kim Pluta) battled each other into submission, DeMull and his charge swept up off cover to blow by in the lane to win going away by one and three-quarters lengths with the mile timed in 1:58.

In the $10,800 Fillies and Mares Open Pace, five-year-old Princess Rockette (Pet Rock - Hammers Princess) never faced a challenge and went wire-to-wire in 1:54.3. The win, her 22nd lifetime, was the second in a row at Northville Downs for driver Kim Pluta, trainer Will Johnson and owner George Hensley Jr.

Drivers Skip DeMull, 64, and Justin Irvine, 20, each had three winners on the night's program and showed that harness racing is the one sport where individuals with large age differences can compete on a level playing field and achieve equal success.

Programming note: Northville Downs will race its next live harness racing program Saturday, May 14. Next week Northville Downs will race its live programs on Thursday (May 19) and Friday (May 20) instead of the usual Friday and Saturday race nights in an effort to maximize the ability to run a successful live race date with the increased business done during Preakness Day. The normal Friday-Saturday schedule will resume the following weekend (May 27-28). First race post time remains 7:30 p.m. each night.