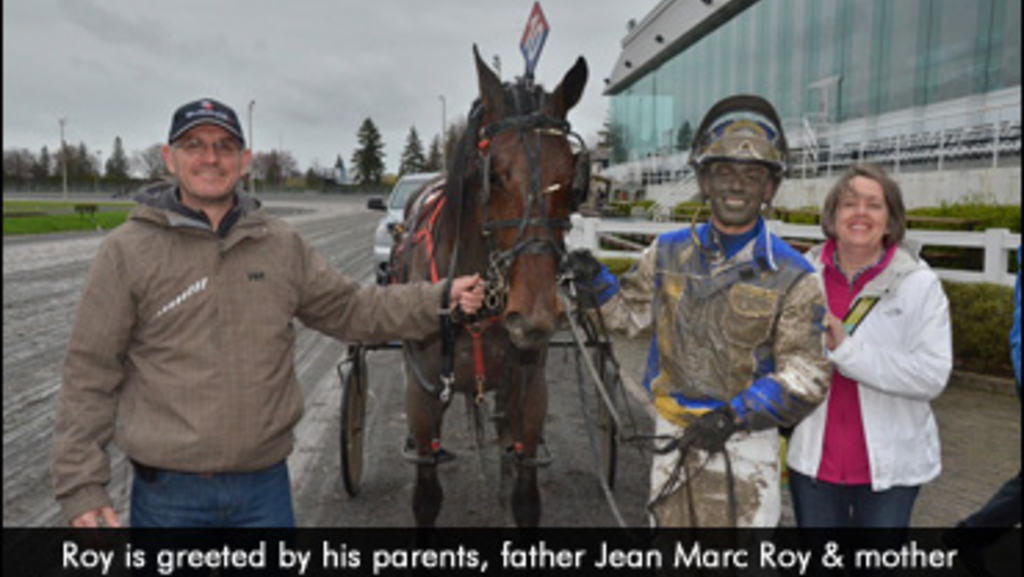 Neither rain nor a sloppy track with a five second allowance could put a damper on harness racing driver Louis-Philippe Roy’s 2017 return to the Hippodrome 3R on Sunday (May 14) as he scored a track record eight winners on the card, including the first four races on the program.

Roy, the 2016 Future Star O’Brien Award winner and the leading driver at both H3R and Rideau Carlton last year, now calls Toronto home as he has been competing this year at Woodbine and Mohawk racetracks and is currently the second-leading dash-winning and money-winning driver in all of Canada.

Roy started off the day scoring an upset win in the very first race with Restless Hanover, paying $15.70 to win. He then completed the Daily Double in the second race with second wagering choice Trys Little Prince, paying $4.50 to win.

In the third race, Roy was able to get live cover second-over with Surveillance ($5.20) before tipping three-wide on the final turn and gunning down race favourite R Rkadabra for the victory.

Then in the fourth race, an opening round division of the Quebec-Bred Series for four and five-year-old pacing mares, it was Louis-Philippe Roy once again, this time with race favourite HP Sissy in 2:03.4.

Skyfall Sena (Jocelyn Gendron) was the first on the lead, but right after the opening quarter-mile, driver Stephane Brosseau had HP Pandora on the move and in command. They led past the half-mile marker and into the backstretch. It was then that entrymate, HP Sissy, and Roy began grinding it out first-over and they were able to wear down the pacesetter on the final turn and sprint home a winner by three-quarters of a length.
HP Pandora held for second with Skyfall Sena third.

Trained by Jean Tourigny, HP Sissy is a four-year-old mare by Up The Credit, bred and co-owned by Claude Hamel of Ayer’s Cliff, Que., with Michel Damphousse of Louiseville, Que. She paid just $2.80 to win. Last year, HP Sissy was the three-year-old filly champion in Quebec.

The only reason that Roy did not win the fifth race, was because he did not have a horse to drive in the race. It was one of two races he was not listed to compete in Sunday.
Roy returned to the winner’s circle for the fifth time in his first six drives in the seventh race division of the Quebec-Bred Series for horses, overpowering the field in the backstretch with favourite Half A Billion in 2:00.3, the fastest mile on the 13-race card.

Leaving from the outer post seven, Roy could not make it to the top and took back with Half A Billion as Mr Match On Beach (Stephane Brosseau) led the field with Sports Authority (Pierre-Luc Roy) in second-place at the opening quarter-mile. Then by the half-mile, Roy came back out with Half A Billion and started grinding it out first-over on the sloppy track. They were not only able to collar Mr Match On Beach in the backstretch, but pass them before the three-quarter-mile marker and then pulled away in the stretch to win in a romp by six lengths. Mach On The Beach (Pascal Berube) was second with stablemate entry Mr Match On Beach third.

Trained by Francis Richard for co-owners Michel & Francois Letarte and Jean Allaire and Corey Giles, Half A Billion earned his third win this year. The five-year-old gelding is sired by Sportswriter. He paid $3.10 to win.

Roy was not done yet, as in the $5,400 ninth race for Preferred 2 pacers he was driving the race favourite, Code Word, who broke stride after the start of the race over the sloppy track, then came back with a bold three-wide move in the backstretch, was hung three-wide through the final turn and kept on coming on to win the race, paying $2.90 to win for trainer Charles Gaudreault.

The day was not over yet for Roy, as he won No. 7 in the 12th race with Quint Largo ($6.50) for trainer Pierre Ouellette Jr. over race favourite Marc Hanover.

With his seventh win on the day, Roy broke Yannick Gingras' 2013 record for most wins ever at H3R on a single race program and then proceeded to add to the record in the 13th and final race of the day.

Driving the 1-5 favourite, Royal Kee Wee N ($2.70), Roy took no chances, moving three-wide at the half-mile marker, getting parked out around the turn and then clearing to the lead before the three-quarters and drawing away in the stretch for the triumph.

Driver Stephane Gendron won the $8,000 eighth race Preferred Trot for the second straight week with Caroluzzo ($6.80), who led from start to finish in 2:06.2. He also drove Ufdragons Rocket ($3.90) to a 2:02.3 victory in the matching Preferred Pace. Gendron is now just four wins away from his 4,000th career victory.

Jamigo is the winningest horse so far at H3R this season, posting his third win in four starts on Sunday for driver/trainer Daniel LaFlamme in the 10th race trot.