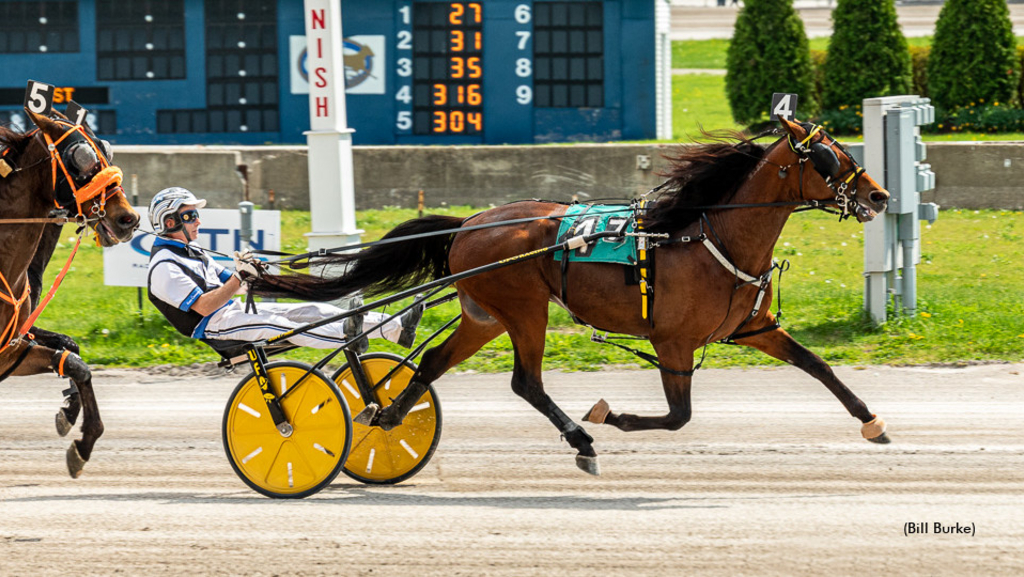 After blowing out the field by five lengths last week in the $15,000 Open Trot at Buffalo Raceway, what could Barn Hall do for an encore on Friday afternoon (May 13)?

Well, he beat the Open field once again but also equaled the all-aged colt and horse trotting track record of 1:56.2 set by Purpose Blue Chip back on June 7, 2018 in posting the victory.

On a perfect spring afternoon with a post time temperature of 80 degrees and a lightning fast track, it was ideal conditions for Barn Hall ($3.50) to strut his stuff.

Starting from the four hole, Barn Hall (Kevin Cummings) had to work hard in going three-wide early as Mystical Sarabi and Schnickel Fritz played hard ball. Finally clearing just past the opening quarter, which went in :28.4, Barn Hall knew he was now the target of the first-over Lougazi (Ray Fisher Jr.).

With splits of :58.0 and 1:27,1, Barn Hall prepared for the impending battle with Lougazi in the stretch. But Barn Hall had more than enough artillery to turn away Lougazi by three-quarters of a length in tying the all-time colt and horse trotting record of 1:56.2. Mystical Sarabi (Dan Yetman), the lone mare in the event, was a very game third, finishing just 1-1/2 lengths behind the winner.

Co-owned by trainer Steven Pratt, Nancy Pratt, the Purple Haze Stables and Out In The Country Stable, it was the second win in four tries this season for four-year-old horse Barn Hall (Conway Hall-Exotic Form). The victory jumped his seasonal earnings to $18,750 and $143,546 in his career.

Live harness racing will resume on Saturday afternoon at 1:30 p.m. with a nine-race card.