Cozette McAvoy has spent fewer than six years in harness racing, but her involvement in the sport has grown from simply owning horses to also include training and breeding. The 38-year-old McAvoy, a corporate attorney, has won 53 races as a trainer since 2014 and assembled a broodmare band of a dozen horses. She hopes to have two homebred two-year-olds hit the racetrack later this year.

“I’m really happy with it,” McAvoy said, adding about her breeding operation, “I don’t intend to be a huge size. I totally love the movie Secretariat, as I’m sure many people do. My dream is a bit of what (Penny Chenery) had. You go out in the morning with your cup of tea and the sun is coming into the barn and you’re peeking in on a horse or two. 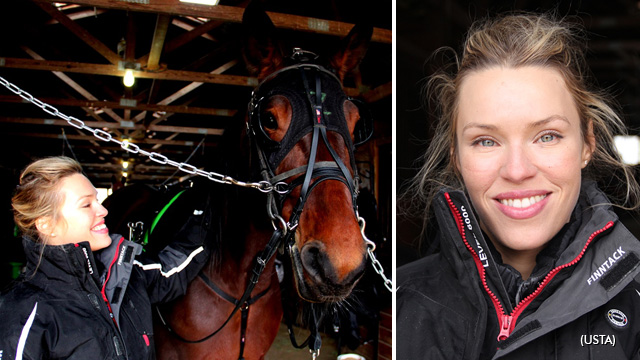 “I want to always know their names and take time to say hi to them. And they know who I am and I know who they are. Having a smaller operation like that suits me just fine.”

So far this year on the racetrack, the Pennsylvania-based McAvoy has seen her stable notch six wins in 42 races this year, with four-year-old male trotter Presidente Zette leading the way.

Presidente Zette, who was unraced at two and limited to four starts at three, has won three of eight races and hit the board a total of six times this season. Last weekend, the stallion won his first-round division of the Bobby Weiss Series for male trotters by a neck over Stormont Power in 1:57.1 at The Downs at Mohegan Sun Pocono.

On Sunday, Presidente Zette is the 3-1 second choice on the morning line in the second of three Weiss divisions. Meadowbranch Ricky, another opening-round winner, is the 5-2 favourite for trainer Jenny Melander. Live harness racing begins at 7:00 p.m. and the Weiss divisions are races three through five on the 14-race card.

“You can see from the race times and the past performances of the horses that are racing in the series that he fits in quite well,” McAvoy said about Presidente Zette. “He seems to be one of the top horses entered in the series, so I’ve got high hopes for him.”

McAvoy bought Presidente Zette under the name Southwind Magnum for $12,000 at the 2015 Lexington Selected Sale. He is by Muscle Hill out of Missymae Bluestone and a full brother to Southwind Mozart, who was second in the 2015 Yonkers Trot and later a winner in Europe. He also is a half-brother to New Jersey Sire Stakes champion Southwind Cocoa and his full brother Mission Hill (formerly Southwind Bugz) sold for $335,000 last fall in Lexington.

“I was not expecting to bid on him,” McAvoy said. “I was thinking he was going to be a high-priced yearling. He ended up being one of the most inexpensive yearlings I bought. I was very surprised at that. I’m thrilled to have Presidente considering how it easily could have not been me as the owner.”

Presidente Zette missed his two-year-old campaign because of surgery to remove bone fragments and got a late start to his three-year-old season, but is making up for lost time.

“He’s great,” McAvoy said. “Like many ungelded horses, I think sometimes they’re a little more interested in chasing things than racing things. It can be an exercise in patience. But he’s certainly putting it all together now. I’ve been really happy with him.

“He’s a sweetheart, even though he’s a stud. You can fuss with him in the stall and pet him and feed him treats. When you ask him to go, he will really grab ahold of you and go. He’s really, really powerful and really nicely gaited.”

Given his inexperience, McAvoy did not stake Presidente Zette to any events this year. But given his pedigree, McAvoy is anxious to see how the stallion develops.

“We’re going to take it one race at a time and go from there,” McAvoy said. “The more he shows, the more we’re willing to give him other chances at harder things. It’s a matter of letting the horse tell us when he’s ready to take the next step.

“I think anybody that has a well-bred stallion is hopeful the horse will eventually mature enough to really have a nice record and win some money. Obviously, not having anything huge at (ages) two or three is atypical of the normal stallion profile. But I have a growing broodmare band of my own, so we’ll just play it by ear and see what happens.”

If nothing else, maybe one morning in the future McAvoy will be enjoying a cup of tea, peeking in on one of his sons or daughters, and saying hi.