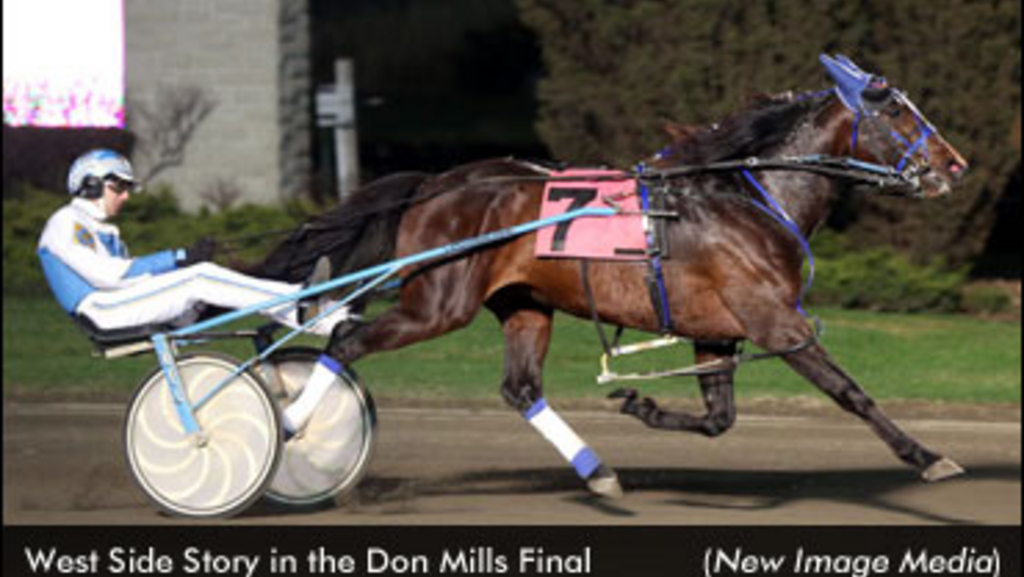 A winner in the opening leg of the Don Mills Trotting Series two weeks ago, West Side Story skipped the second round and returned to steal the spotlight with Chris Christoforou working out the winning off-the-pace trip in the $43,000 final on Saturday night at Woodbine Racetrack for trainer Per Henriksen.

When the wings of the gate swung open, last week's winner Mego Moss (James MacDonald) out-sprinted Hldontghttoyurdrms (Jonathan Drury) to the lead from the outside post nine through a speedy :26.4 opening panel.

However, the parked out Crosbys Clam Bake (Paul MacDonell) pressed on, eventually edging by at the half in :55.4 and clearing to command down the backstretch.

As the new leader raced towards the 1:24 third quarter mark, Hldontghttoyurdrms was flushed first over with West Side Story picking up his cover as he advanced from the backfield.

The gritty Crosbys Clam Bake continued to lead the way into the stretch, but West Side Story came storming by in front of the grandstand for the career-best 1:53.3 victory. Crosbys Clam Bake settled for second two and a half lengths behind while Hldontghttoyurdrms finished third over Mego Moss.

The son of Conway Hall-Too Good For You now boasts five wins and two seconds in eight starts this year with seasonal earnings climbing to $70,000 for Ontario owners Steve Organ of Aurora and Norwood's Asa Farm.

Henriksen told WEG's media department that West Side Story and stablemate Frisky Magic will now be heading to France. 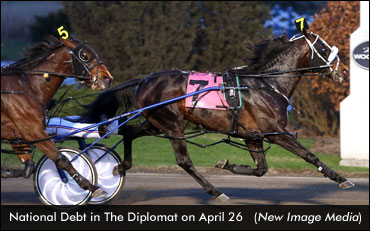 While the Don Mills wrapped up on Saturday, The Diplomat began with North America Cup eligible National Debt continuing his undefeated win streak in the $20,000 first leg of this series for three-year-old pacers that are non-winners of $100,000 in 2013.

The heavy 1-2 favourite went wire-to-wire in 1:52.2 with Canada's Driver of the Year, Sylvain Filion, aboard.

National Debt left from post seven and carved out fractions of :27, :55.4 and 1:24.3 while building up a four length advantage into the stretch. The Allamerican Native-Our Inheritance colt then cruised home to win by three-quarters of a length over pocket-sitter Roger Mach Em (Jack Moiseyev). Somewhere In L A (Steve Condren) finished nearly five lengths behind in third.

National Debt was making his Ontario debut from the Bob Young stable after back-to-back 1:50.3 wins in the Buddy Gilmour Memorial at The Meadowlands in late February and early March. The colt, who started his career in Alberta, is now seven-for-seven lifetime with earnings climbing to $70,750. He is owned by O'Brien Award winning horseman Kelly Hoerdt, Blair and Erna Corbeil, all of Beaumont, Alta., along with J And T Silva Stables LLC of Long Beach, New York.

“That’s exactly what we wanted to see tonight,” said Young after the race. “He went to the lead, got a nice second quarter breather and brushed home strong. He looked well within himself at the wire and we couldn’t ask for more.”

The second leg of The Diplomat is scheduled for next Saturday, May 3 with the $50,000 (added) final to be held the following Saturday, May 10.

In other action, past Cup champion Thinking Out Loud returned to winning form in Saturday's $34,000 Preferred Pace for driver Randy Waples and trainer/co-owner Bob McIntosh as he held off In Commando (Chris Christoforou) by a head in 1:52 flat, with Modern Legend (James MacDonald) finishing third.

The win was his first in two starts this year after recovering from an injury that cut his four-year-old stakes campaign short last season following his U.S. Pacing Championship victory.