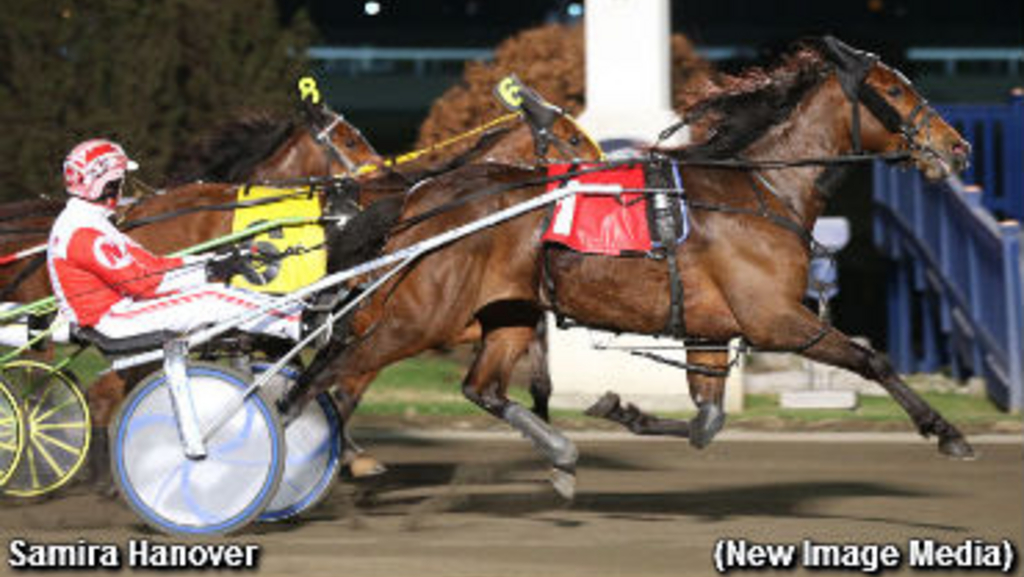 Trotters were in the spotlight Monday evening at Woodbine Racetrack, as the Rexdale, Ontario oval hosted the final of the Lifetime Dream Series and the opening round of the Tie Silk Series.

All eyes were on Rose Run Oriana, who was sent off as the 1-2 favourite in the $43,200 final of the Lifetime Dream Series, but she failed to convert for her backers. She was upended by a rallying Samira Hanover, who stopped the clock in a new series record of 1:53.3 for driver Paul MacDonell and trainer Mike Keeling.

MacDonell, who was the regular pilot behind the series’ namesake – Lifetime Dream, got away third with Samira Hanover while Rockin With Dewey and Standing My Ground took turns on the lead through panels of :26.4, :56.2 and 1:25. Samira Hanover catapulted off cover at the head of the lane and stormed home in :27.3 to win by half a length. Rose Run Oriana was second best, with Rockin With Dewey earning the show dough.

P C Wellwood Enterprises, William Weaver III, Steve Organ and A K Malik Stable share the ownership on the four-year-old daughter of Kadabra-Southern Puff. It was her first victory of the season from seven attempts, but it went down as the sixth lifetime tally for the career winner of $104,280.

Monday’s card also featured the first leg of the Tie Silk Series for three-year-olds. Two divisions went postward, with each split carrying a purse of $15,000.

Musical Spell, who won last week’s seasonal debut in 1:59.4, cruised to an easy victory in the first division for driver Mike Saftic. The son of Kadabra-Musical Victory rushed to the front from Post 4 and strolled through panels of :27.2, :58.4 and 1:29.1 before soaring home in :28.1 and winning by 2-1/4 lengths over race favourite Windsun Revenge in 1:57.2. Third prize went to Gangio.

Mike Guitard trains the gelding for Haryott Stables Inc of Etobicoke, Ontario. The lightly-raced trotter, who was purchased for $24,000 from the 2012 Harrisburg Yearling Sale, has banked $15,500 to date.

Entranced set a North American season’s record when he roared away from the foes he faced in the second division. The son of Kadabra-Purple Haze threw down fractions of :27.1, :56 and 1:25.1 for driver Mike Saftic before finishing off his rivals with a :29.1 closing quarter. He was 1-1/2 lengths better than So Not Cool in a clocking of 1:54.2. Race favourite Verdi had to settle for third prize.

Trainer Garth Gordon co-owns the gelding with Gary Green of Puslinch and Bernard Tobin of Georgetown, Ontario. Purchased for $50,000 from the 2012 Lexington Select Yearling Sale, Entranced won for the second time in his career while lifting his lifetime earnings to $28,500.

The Jackpot Hi 5 wager continues to be a hot topic of conversation among handicappers, and it will be more of the same when harness racing returns to Woodbine Racetrack on Thursday evening.

There were multiple winning tickets sold on the combination of 10-5-1-4-9 during Monday evening’s card, and as a result a staggering carryover of $334,363.78 will spill into Thursday’s pool.